Copyright Flowchart: Can I Use It? Yes? No? If This… Then… 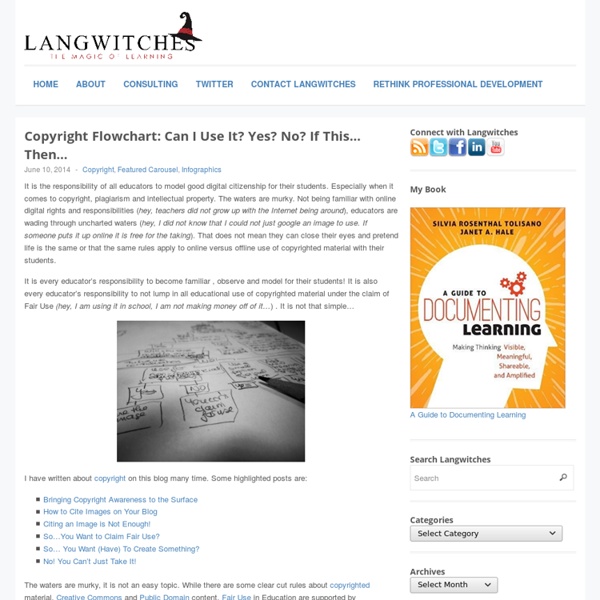 It is the responsibility of all educators to model good digital citizenship for their students. Especially when it comes to copyright, plagiarism and intellectual property. The waters are murky. Not being familiar with online digital rights and responsibilities (hey, teachers did not grow up with the Internet being around), educators are wading through uncharted waters (hey, I did not know that I could not just google an image to use. If someone puts it up online it is free for the taking). That does not mean they can close their eyes and pretend life is the same or that the same rules apply to online versus offline use of copyrighted material with their students. It is every educator’s responsibility to become familiar , observe and model for their students! I have written about copyright on this blog many time. The waters are murky, it is not an easy topic. We have ubiquitous digital access, ease of duplication and distribution of information. Related 30. In "Digial Citizenship" 8. 10.

Graphic Organizer Worksheets Advertisement. EnchantedLearning.com is a user-supported site. As a bonus, site members have access to a banner-ad-free version of the site, with print-friendly pages.Click here to learn more. Occam's razor - Wikipedia Philosophical principle of selecting the solution with the fewest assumptions Occam's razor, Ockham's razor, Ocham's razor (Latin: novacula Occami) or law of parsimony (Latin: lex parsimoniae) is the problem-solving principle that "entities should not be multiplied without necessity"[1][2] or, more simply, the simplest explanation is usually the right one. The idea is attributed to English Franciscan friar William of Ockham (c. 1287–1347), a scholastic philosopher and theologian who used a preference for simplicity to defend the idea of divine miracles. This philosophical razor advocates that when presented with competing hypotheses about the same prediction, one should select the solution with the fewest assumptions,[3] and that this is not meant to be a way of choosing between hypotheses that make different predictions. History[edit]

Citing an Image is Not Enough!  I am thrilled to see so many students creating blog posts and going BEYOND “writing” text made up letters, words, sentences and paragraphs. Being able to “read” and “write” in other media is part of becoming fluent in media literacy. In addition to media literacy, knowing your rights and responsibilities as an ethical digital citizen is a vital part of participating in our digital world. Chapter 1: Introduction The PDF file you selected should load here if your Web browser has a PDF reader plug-in installed (for example, a recent version of Adobe Acrobat Reader). If you would like more information about how to print, save, and work with PDFs, Highwire Press provides a helpful Frequently Asked Questions about PDFs. Alternatively, you can download the PDF file directly to your computer, from where it can be opened using a PDF reader. To download the PDF, click the Download link above. Fullscreen Fullscreen Off

An Atlas of Cyberspaces- Historical Maps USENET in 1981. The topology of the BITNET in 1981 (partial map) The NSFNET infrastructure and topology in 1991. The Death Of Expertise I am (or at least think I am) an expert. Not on everything, but in a particular area of human knowledge, specifically social science and public policy. When I say something on those subjects, I expect that my opinion holds more weight than that of most other people. Silvia Tolisano- Langwitches Blog When using Copyrighted work with written permission from owner… Used with permission from “name” , URL link to original source and or owner online presence. Ex. Used with permission from Silvia Tolisano When using images licensed under Creative Commons…

Chapter 2: Survey Results Our informal digital curation survey, conducted between September 2013 and March 2014, was shared via library e-mail lists, Twitter hashtags, and blogs. The thirty-two-question survey generated 195 responses, offering a snapshot of digital curation practice, revealing how this particular sample of library professionals define and engage in social media curation. We understand that this self-selected sample likely opted to participate because of their own interests in curation. Thus, our results are not meant to be generalized across the larger population of librarians. A taxonomy of practice emerged from our data. Free curation tools have strong support, as does the commercial tool LibGuides, as the preferred platforms for curation work, while the academic community mentioned the use of a variety of open-source content management systems.

Humanize Your Data Normally when we think of data a series of “0s” and “1s” come to mind, or perhaps the twelve digits of an IP address come to mind. Let’s face it, when we normally think of data it’s normally viewed as a series of cold, hard facts. Jer Thorp wants us to change that. Auntie Dogma's Garden Spot Perennial, Viola Tricolor Johnny Jump Ups are a popular viola. They are called “old fashioned” favorites.