Thedianerehmshow. Hard-to-trace ‘gray money’ raises the stakes in big Colorado races. With the election only a month away and mail ballots due out in less than two weeks, “gray money” groups are pouring millions of dollars into Colorado’s most contentious state House and Senate races. 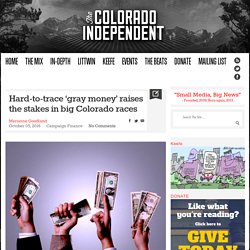 Four Republican committees have raised $3.5 million in the last two years, and spent more than $700,000 between September 15 and September 30, mostly on advertising. Three Democratic groups raised $6.6 million in the past two years, and between September 15 and September 30 spent $1.6 million, much of it on advertising. Committees working on behalf of candidates from both parties are far out-raising the campaigns themselves. Messenger explains how gray money is clouding campaign finance transparency in Missouri. Behind the curtain of ‘gray money’: Donors, motives hard to track in Washington legislative races. “Nesting doll” campaigns, in which one PAC gives to another to avoid disclosing donors, are increasingly common. 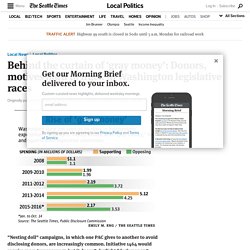 Initiative 1464 would require more transparency, but it doesn’t daylight “dark money,” another kind of opaque campaign money. Mark Mullet, a Democratic state senator from Issaquah, has been attacked time and again this year — Mullet says inaccurately — in hard-hitting campaign mailers by a group called Working Families. And who are these Working Families? Study finds difficulty tracing dark money in political ads. An Occupy Wall Street demonstrator holds a sign as others gather in New York’s Foley Square during a national day of action on January 20, 2012. 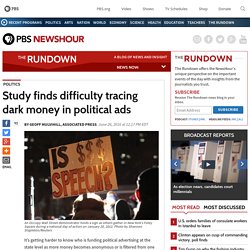 Photo by Shannon Stapleton/Reuters It’s getting harder to know who is funding political advertising at the state level as more money becomes anonymous or is filtered from one political action committee to another, a new study finds. ‘Gray money’ spending explodes in states. How Gray Money Is Creating a Transparency Problem in American Politics.

As dark money in elections—spending by groups that conceal their funders from the public—has boomed in recent years, advocates of transparency have had one area of grudging relief. 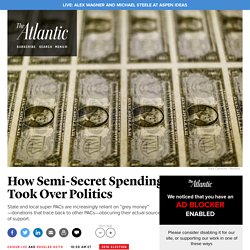 Super PACs, empowered by 2010’s Supreme Court rulings in Citizens United and SpeechNow to spend unlimited sums, typically are required to disclose their donors. The problem? They very often don’t—at least, not in a way that shows where their money really came from. In a new report looking at secret spending in state and local elections, we found that most of the nominally transparent outside spending in state races has become exceedingly difficult to trace, a phenomenon we’re calling “gray money.”