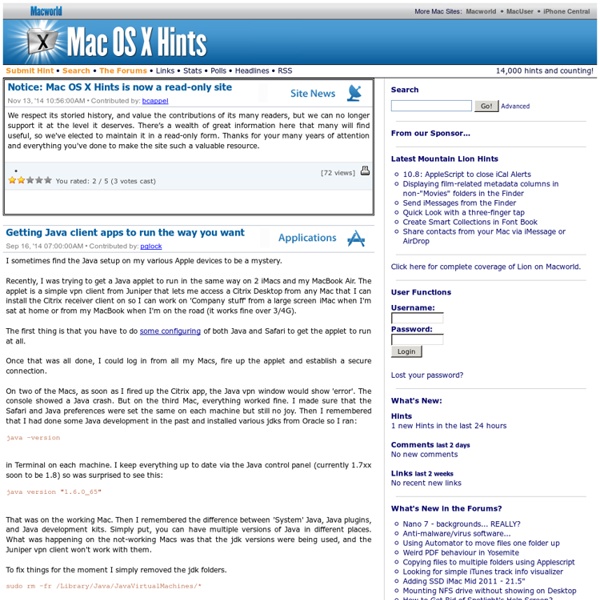 There is already an old hint about this topic, but it doesn't really explain it very clearly, only in the comments. Here's how you can change the margins in TextEdit to your favourite size, so that you can use, for example, the whole space on a sheet of paper when printing. First, save your document first as a Rich Text file (.rtf), if you have not already done this. To see the effect directly in your document, open it and enable under the Format menu the setting Wrap to Page for your document. Next open up the TextEdit preferences, switch to the tab Open and Save and check on the option Display RTF files as RTF code instead of formatted text. Open the document again and you will see the raw code that defines how the document look like.

How to upload iWeb 09 sites without a .mac account iWeb from 2009 onwards has the ability to publish your website directly to an ftp server. This means that you don’t need a .mac account to publish your iWeb site. If you have iWeb 08 or earlier it’s not built-in, but you can still do it, read this previous article on how to publish via ftp from iWeb 08. Firstly, you will need to purchase a web hosting account with FTP access where you can upload files to the internet. This will usually come for free from your ISP and be included with your normal internet access package, just like email is included. You will need to find out some technical details from you ISP or web provider before you progress. Raging Menace - MenuMeters Introduction MenuMeters is a set of CPU, memory, disk, and network monitoring tools for Mac OS X. Although there are numerous other programs which do the same thing, none had quite the feature set I was looking for. Most were windows that sat in a corner or on the desktop, which are inevitably obscured by document windows on a laptop's small screen. Those monitors which used the menubar mostly used the NSStatusItem API, which has the annoying tendency to totally reorder my menubar on every login. The MenuMeters monitors are true SystemUIServer plugins (also known as Menu Extras).

How to install and use Homebrew Updated for OS X 10.10 Yosemite! Should work on OS X 10.9 Mavericks too. If you’re doing any Ruby on Rails or other open source development on your Mac, you’re going to need Homebrew. What is Homebrew? 15 Favorite iPad Apps As Selected By Teachers Out of 125 responses from teachers indicating their top 3 apps, these are the apps that were listed most often. Over the last few weeks, we ran a survey asking teachers to tell us about two or three of their favorite iPad apps that they use in an education-related context. Today we share the apps that were listed most often, and include some feedback from teachers regarding why they like them so much. As it turns out, free apps really outweighed paid apps in our survey responses. Here I list eleven free apps that rose to the top of the list when ranked by numbers of votes, followed by four paid apps that performed as well as the lower ranking free apps. Evernote and Dropbox easily rose to the no. 1 & 2 spots in the ranked list, with about 1 out of 3 respondents recommending at least one of these two popular applications.

Example Workflows Learn by example. The best way to learn how to use Automator is by constructing and running the following example workflows yourself. Each example is described in step-by-step detail with related illustrations. You can do it, and... it's fun! Re-name Finder Items In this example, you'll use Automator to create a tool for easily renaming a group of Finder items.

Managing Windows networks using scripts, Part 6 In previous articles in this series we explored what we could do with the Win32_NetworkAdapterConfiguration class and getting over the "hump" that many Windows administrators face when learning how to script. Now let's go back to the script ChangeIPAddress.vbs that we developed to change the IP address of a network adapter: {*style:<i>Option Explicit Dim objWMIService Dim objNetAdapter Dim strComputer

ImAFish Articles » Blog Archive » 52 Ways to Speed Up OS X After Apple recently announced a delay to OS X 10.5 Leopard I had to delay my iMac upgrade until the Autumn. This led me to thinking about how to speed up Tiger to get the most out of my ageing G5. This is what I came up with: General System 1. Automator: Examples This example is easy-to-follow and useful. It's a great first workflow to introduce yourself to Automator. Click here to download the image files used in this demonstration. Let's begin. The group of image files pictured below are named in a manner typical to photos extracted from a digital camera or photo CD collection. Their numeric names do little to describe the content of the photos, making their identification more difficult.

TinkerTool: Description TinkerTool is an application that gives you access to additional preference settings Apple has built into OS X. This allows to activate hidden features in the operating system and in some of the applications delivered with the system. The tool makes sure that preference changes can only affect the current user.