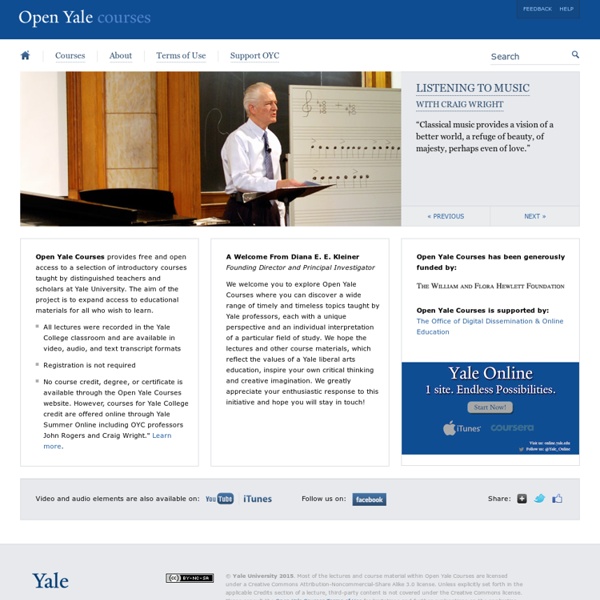 About The third is community. We believe learning should be as rich and varied as the world you're learning about. So with our community we're building a kind of multimedia wonderland of learning, where videos, audio, usage, mnemonics, etymologies and much more bring your learning to life. Open Harvard Courses for Free through the Open Learning Initiative At Harvard Extension School, free and open learning is hardly a new concept. In fact, the Extension School was founded with this mission in mind: to create an affordable way for any motivated student to take courses at Harvard. We stay true to this mission today, offering several free courses and nearly 800 for-credit courses at reasonable tuition rates.

Sequences A sequence is a series of multiple posts on Less Wrong on the same topic, to coherently and fully explore a particular thesis. Reading the sequences is the most systematic way to approach the Less Wrong archives. If you'd like an abridged index of the sequences, try XiXiDu's guide, or Academian's guide targeted at people who already have a science background. Benito's Guide aims to systematically fill the reader in on the most important ideas discussed on LessWrong (not just in the sequences).

Creative Commons Many Flickr users have chosen to offer their work under a Creative Commons license, and you can browse or search through content under each type of license. Here are some recently added bits and pieces: Attribution License » 87884386 photos (See more) Attribution-NoDerivs License

Take College And University Courses Online Completely Free In recent years massive open online courses (MOOCs) have become a trend in online education. The term was coined in 2008 by David Cormier, manager of web communications and innovations at the University of Prince Edward Island. The first MOOC was created the previous year, at Utah State University. Today, there are hundreds of thousands of courses available online at no cost. university lectures computer science Whether your goal is to earn a promotion, graduate at the top of your class, or just accelerate your life, lectures can help get you there. Our archives of lectures cover a huge range of topics and have all been handpicked and carefully designed by experienced instructors throughout the world who are dedicated to helping you take the next step toward meeting your career goals. Lifelong learns can turn their free time turn into self-improvement time. The online lectures on this list are more than lecture notes or a slideshow on a topic -- they were designed for audiences like you, with carefully sequenced themes and topics taught by veteran educators, and often with additional resources for your own independent study. The lectures are available to anybody, completely free of charge. Lecture courses are a valid and vital learning tool, and may be one of the best methods of learning available.

Enter an Archive of 6,000 Historical Children's Books, All Digitized and Free... We can learn much about how a historical period viewed the abilities of its children by studying its children's literature. Occupying a space somewhere between the purely didactic and the nonsensical, most children’s books published in the past few hundred years have attempted to find a line between the two poles, seeking a balance between entertainment and instruction. However, that line seems to move closer to one pole or another depending on the prevailing cultural sentiments of the time. And the very fact that children’s books were hardly published at all before the early 18th century tells us a lot about when and how modern ideas of childhood as a separate category of existence began.

Fisher's exact test of independence - Handbook of Biological Statistics Summary Use the Fisher's exact test of independence when you have two nominal variables and you want to see whether the proportions of one variable are different depending on the value of the other variable. Use it when the sample size is small. Main Page On August 26 2020, the Project Gutenberg website underwent some major changes. These changes had been previewed since early 2020, and visitors to the old site were invited to try the new site, including giving input via a brief survey. The old site is no longer available.

Philosophy Philosophy is the study of general and fundamental problems concerning matters such as existence, knowledge, values, reason, mind, and language.[1][2] The Ancient Greek word philosophia was probably coined by Pythagoras[3] and literally means "love of wisdom".[4][5][6][7][8] In the 19th century, philosophy became more professionalized as it began to be studied and taught in modern research universities.[13][14] Contemporary academic philosophers subdivide research areas in various ways. For example, topical divisions include major branches such as epistemology, logic, metaphysics, ethics, aesthetics, and other specialized branches.

101 Killer Open Courseware Projects from Around the World: Ivy L How will you obtain a higher education? Some major headlines in 2009 already play on the fears about how to pay for a higher education. Press releases from colleges want to quell those fears about monies for college, and politicians have introduced legislation to make education more affordable.

ArsDigita University Curriculum About the Curriculum The curriculum was modeled on the undergraduate CS program at MIT. Several of the courses were straightforward adoptions of MIT courses. A few were specifically designed for the program, which was roughly in line with the ACM's 2001 Model Curricula for Computing. The process of accreditation (ACM or CSAB/ABET) would have been pursued if the program had continued. Courses GRE Computer-delivered General Test Content and Structure (For Test Takers) The overall testing time for the computer-delivered GRE® General Test is about three hours and 45 minutes. There are six sections with a 10-minute break following the third section. Structure of the Computer-delivered Test

Take Any College Class for Free: 236 Open Courseware Collections Written by: Thomas Broderick Universities, colleges, and private organizations offer free online college courses to help students acquire new knowledge and skills. These courses cover a variety of traditional academic topics and other subjects that can lead to career advancement and personal enrichment. Courses occur online, allowing learners from all over the world to participate.