The Largest Vocabulary in Hip hop 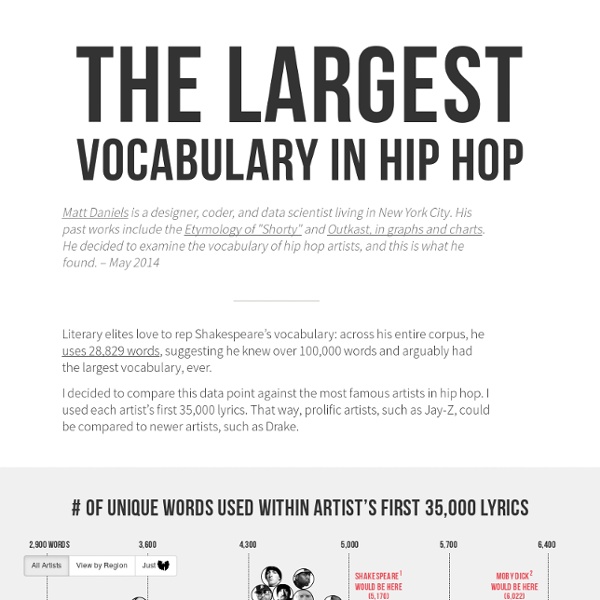 Notes/sources: (1)(2) I used the first 5,000 words for 7 of Shakespeare's works: Hamlet, Romeo and Juliet, Othello, Macbeth, As You Like It, Winter's Tale, and Troilus and Cressida. For Melville, I used the first 35,000 words of Moby Dick. All lyrics are provided by Rap Genius, but are only current to 2012. My lack of recent data prevented me from using quite a few current artists. This data viz uses code by Amelia Bellamy-Royds's in this jsfiddle.

Smart people listen to Radiohead and dumb people listen to Beyoncé, according to study How does a person’s intelligence relate to the type of music they listen to? For the last several years, a software application writer by the name of Virgil Griffith has charted musical tastes based on the average SAT scores of various college institutions. For example, students attending the California Institute of Technology have an average SAT score of 1520. By looking at Facebook to determine the most popular (or — “liked”) band of students at Cal Tech, Griffith was able to conclude that Radiohead really truly is music for smart people. A highly scientific study, I know. As Digital Inspiration points out, Griffith’s chart reveals Sufjan Stevens, Bob Dylan, The Shins, and — uh — Counting Crows as other favorite bands of smart people.

How to Survive a Lightning Strike: An Illustrated Guide The best way to survive a lightning strike is to avoid being outdoors in the first place. Use the 30/30 Rule: If, after seeing lightning, you can’t count to 30 before hearing thunder, get inside a building or car. Don’t go outside until 30 minutes after the last clap of thunder. 9 Overlooked Technologies That Could Transform The World What I've noticed is that most people don't really pay attention to "science" news, unless it's something that they can see immediately. I think this is at least partially because of the amount of news that comes out daily - whatever we may think about the quality of news, there is just a flood of it, which makes picking out "interesting" items difficult. When I talk about (just for example) the idea of gene therapy, most people think that it is still complete science fiction, as opposed to a very near-term product that will be available. Of course, CSP has been around for years, so it isn't really "new" to the average person. What they don't realize is the way that efficiencies have improved...

April 23rd, 1988 - You're Getting Old! Date of birth: April 23rd, 1988 You are 26 years, 1 month and 12 days old today. You are 9,539 days old. Or, to put that in perspective Voices from the Days of Slavery - Faces and Voices from the Presentation (American Memory from the Library of Congress) Approximately four million Americans enslaved in the United States were freed at the conclusion of the American Civil War. The stories of a few thousand have been passed on to future generations through word of mouth, diaries, letters, records, or written transcripts of interviews. Only twenty-six audio-recorded interviews of ex-slaves have been found. This collection captures the stories of former slaves in their own words and voices. Little biographical information about them is available.

Roar – Katy Perry – ESL lesson plan The song “Roar” perfectly fits the topic of gender roles/stereotypes, feminism. Besides, it’s a great source of idioms, set expressions and phrasal verbs. That’s how I would use it in class. 1. 88 (number) Eighty-Eight is a refactorable number, a primitive semiperfect number and an untouchable number. It is also an hexadecagonal number. Since it is possible to find sequences of 88 consecutive integers such that each inner member shares a factor with either the first or the last member, 88 is an Erdős–Woods number. In base 10, it is a palindromic number and a repdigit. 7 Scientific Reasons a Zombie Outbreak Would Fail (Quickly) They Can't Take the Heat It's generally accepted by zombie experts that they're going to continue to rot, even as they shamble around the streets. What the movies fail to convey, however, is the gruesome yet strangely hilarious effect the hot sun has on a rotting corpse. The first concern is putrefaction. Thanks to the plethora of bacteria we use in our colon for digesting plant matter, called gut flora, our bodies are ripe for decay the second our heart stops. Since heat speeds the growth of bacteria (which are plenty happy to start feasting on you once your immune system is no longer a concern) the zombie's got a looming expiration date the very second it turns.

Man goes out clubbing in Manchester and wakes up in a toilet in PARIS OOPS: Luke Harding found himself in Paris after a night out drinking [CAVENDISH PRESS] But party loving Luke Harding had the mother of all hangovers after getting steaming drunk in Manchester nightclub Tokyo's and waking up in PARIS. The 19-year-old was getting a cab home at 4am when he suddenly decided it was a good idea to head to the French capital after finding his passport in his pocket. He told the cabbie to change course to Manchester Airport, and booked a last minute flight for £100 at 6am using his iPhone. And when he woke up the next day in a TOILET at Charles De Gaulle Airport, he realised he'd made a bit of a detour - a 500-mile detour to be precise. PARIS: A 500-mile trip from Oldham saw Luke take in the French sights [CAVENDISH PRESS]

Glossary of BitTorrent terms Glossary[edit] Availability[edit] (Also known as distributed copies.) The number of full copies of a file (or set of files and directories) directly available to the client. Each seed adds 1.0 to this number, as they have one complete copy of the file. 7 of the Weirdest Human Enigmas MOST KIDS love reading the color funny papers on Sundays. As a kid, one of my favorite strips was "Ripley's Believe It or Not." It always featured some fantastic facts or coincidences. Often it would tell of people with unusual abilities, characteristics, or circumstances: a man with a birthmark in the shape of a perfect heart on his chest; a woman whose head was shaped like a Ming vase; twins with six ears between them. Stuff like that. It makes interesting reading and, of course, I'm still fascinated by such amazing tales.