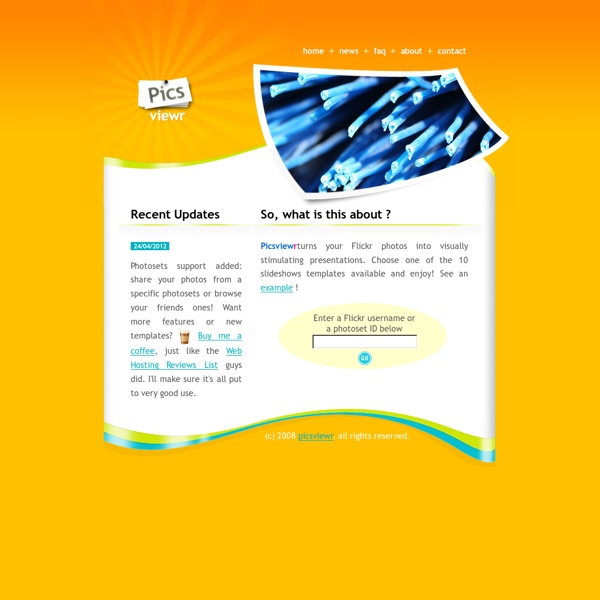 Get Muvizu When you download and install Muvizu:Play you are required to accept an End User Licence Agreement (EULA) which concisely outlines the dos and don’ts of the commercial exploitation of footage from Muvizu:Play. But in the interests of plain language, here’s a summary of the rules: Muvizu:Play is a free trial of our software. Muvizu:Play renders animations with a watermark in the bottom left of the image and is limited to SD output. This watermarked footage may be used for educational, non-commercial and personal projects. Wormhole A wormhole, also known as an Einstein–Rosen bridge, is a hypothetical topological feature of spacetime that would fundamentally be a "shortcut" through spacetime. A wormhole is much like a tunnel with two ends each in separate points in spacetime. For a simplified notion of a wormhole, visualize space as a two-dimensional (2D) surface.

Soo Meta - A Nice, New Way to Create Multimedia Presentations Soo Meta is a new digital presentation tool from the same people that developed the YouTube remixing tool Dragon Tape . Soo Meta allows you to combine videos from YouTube, pictures from the web or from your desktop, text, and voice recordings to create a presentation. You can also pull content in from Pinterest and Twitter to use in your final product. The Soo Meta editor is fairly easy to use.

simplebooklet.com Make in minutes, share online. Build a web booklet from your own content or convert an existing PDF. Our design tool is code free, drag and drop simple. New Wormhole Theory Uses Space Photon Energy “Fluid” A new theory expands on other theories and adds photon energy “fluid” as a way to support wormholes. The introduction to the paper states the following. Wormholes are hypothetical geometrical structures connecting two universes or two distant parts of the same universe. For a simple visual explanation of a wormhole, consider spacetime visualized as a two-dimensional (2D) surface. If this surface is folded along a third dimension, it allows one to picture a wormhole “bridge”. [1] “A possible cause of the late-time cosmic acceleration is an exotic ﬂuid with an equation of state lying within the phantom regime, i.e., w = p/ρ < −1.

99 Resources to Research & Mine the Invisible Web College researchers often need more than Google and Wikipedia to get the job done. To find what you're looking for, it may be necessary to tap into the invisible web, the sites that don't get indexed by broad search engines. The following resources were designed to help you do just that, offering specialized search engines, directories, and more places to find the complex and obscure. 5 Ways to View PowerPoint Presentation on iPad Have a pile of PowerPoint presentation files and wanna view them on your new iPad? Though playing PowerPoint presentation on iPad is wanted for most iPad users, Apple doesn't have a plan to develop any tool for it. The good news is that with some wordarounds, you can view PowerPoint on iPad freely. Below 5 ways are introduced for you to play PPT on iPad. Read on to learn the details. 1.

New data confirms: Neutrinos are still traveling faster than light "It is worth pointing out, however, that the latest arXiv preprint lists 179 authors, while the original lists 174. Would you ever classify five people as "most of" 15? To make things more confusing . . . "four new people" have decided not to sign, according to Science. Now, none of the above numbers may match up . . .." The original 174 include a duplicate " F.

Gravitational-wave finding causes 'spring cleaning' in physics Detlev van Ravenswaay/Science Photo Library Artist's rendering of 'bubble universes' within a greater multiverse — an idea that some experts say was bolstered with this week's discovery of gravitational waves. On 17 March, astronomer John Kovac of the Harvard-Smithsonian Center for Astrophysics presented long-awaited evidence of gravitational waves — ripples in the fabric of space — that originated from the Big Bang during a period of dramatic expansion known as inflation. By the time the Sun set that day in Cambridge, Massachusetts, the first paper detailing some of the discovery’s consequences had already been posted online1, by cosmologist David Marsh of the Perimeter Institute for Theoretical Physics in Waterloo, Canada, and his colleagues. Cosmologist Marc Kamionkowski of Johns Hopkins University in Baltimore, Maryland, agrees that some axion models no longer work, “because they require inflation to operate at a lower energy scale than the one indicated by BICEP2”.

Canvas: Teach More Effectively, Save Hours of Valuable Time LATEST COURSE UPDATE: November 05, 2014 Over 800 students enjoying this course! What is this course about? This course will show you how to use the Canvas Learning Management System, or Canvas LMS, thoroughly, and in depth, through step-by-step tutorials.