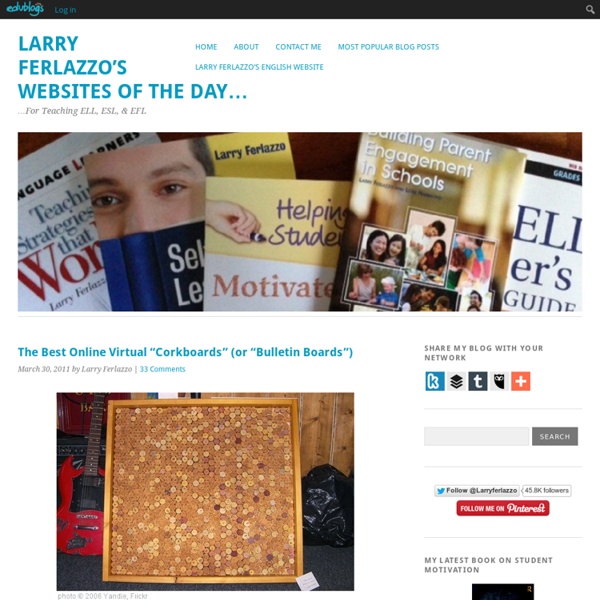 NOTE: First, Wallwisher, the popular virtual “corkboard” or “bulletin board” Web tool changed their name — they’re now known as Padlet (though all their old links using the Wallwisher name work fine). Now, Corkboard.Me, a similar tool, just announced they’re changing their name, too — they are now known as NoteApp. Wallwisher was the first online application that let you easily place virtual post-it notes on a virtual corkboard or bulletin board, and allow you to post text, images, and/or videos on them. This kinds of apps have many uses. Several similar sites have followed in Wallwisher’s wake, and they have been helped by periodic technical issues Wallwisher has seemed to have (recently, though, they seemed to have fixed them). Here are my choices for The Best Online Virtual “Corkboards” (or “Bulletin Boards”): Wallwisher, the granddaddy of this kinds of apps, lets you, with very, very minimal registration, create a “wall” where you can place virtual sticky-notes. Feedback is welcome. Related:  Distance Learning Resources

The Best Sites That Show Statistics By Reducing The World & The U.S. To 100 People Reducing statistics to “if _________ were 100 people, then __________” can make them very accessible, engaging, and thought-provoking. For example, there’s the well-known “If Twitter Was 100 People” infographic. There are also several sites that use “gimmick” to illustrate much more important data about the world around us. I thought they might make a useful “The Best…” list for English Language Learners and others. Here are my choices for The Best Sites That Show Statistics By Reducing The World & The U.S. Miniature Earth is a pretty amazing site. USA has an article about a book and school curriculum that portrays the United States as one hundred people. 100 People: A World Chart is also accessible. The World of 100 is a series of infographics highlighting various statistics. Here’s a site that uses Lego-like imagery to reduce the world to 100 people in different categories — weird, but, I think, effective. “If The World Were A Village Of 100 People” is a good infographic.

Dictation Is a Free, Easy-to-Use Speech-to-Text App for Chrome Recommended by Thorin Klosowski Clips Adds Tons of Copy and Paste Functionality to iOS "You Learn By Finishing Things" I Want to Write iOS Apps. Access Hyperlapse's Hidden Settings with Four-Finger Taps Watch for These Signs to Avoid Exercise Injuries Use "Hey Siri" without Being Plugged Into a Power Source The Fiddle Factor: How to Learn Enough to Fix Anything Figure Out What Song Is Playing with Shazam and Siri Chrome for iOS Now Downloads and Saves Files in Supported Applications Build Your Own Adobe Creative Suite with Free and Cheap Software Vidgets Adds Loads of Widgets to the iOS Notification Center The Kano Kit Teaches Kids to Build Computers and Learn to Code Another iOS Exploit Allows Untrusted Users to Access Siri The Design Student's Daily Bag Use a Sheet Protector to Scan In a Crumpled Check Master Adobe's Pen Tool with This Interactive Tutorial Hide App Store Purchases with a Left Swipe Street Sweep Alert Reminds You to Move Your Car Before You're Ticketed

Teaching the Brain to Learn -- THE Journal Research | Feature Teaching the Brain to Learn Here’s how educators can use the latest neurological research to help improve math and science instruction. By Greg Thompson06/02/14 Many educators have heard the old maxim, “If all learning is 0 to 10, then 0 to 1 is the most important.” Brain research backs up this nugget of wisdom, and neuroscientists such as Bruce E. Wexler makes it his business to keep up on the latest brain research, and his analysis suggests that the right kind of early interventions and techniques can change a child’s educational future. According to Wexler, “These systems are not wired at birth, and they’re not determined by our genetics. Wexler’s analysis supports the notion that kids who come to school without healthy cognitive stimulation may not be operating at their potential. Emotion and Learning The idea that the brain must be prepared to learn also applies to emotional states, because emotions influence cognitive abilities.

iLearn Technology Best of the web: 19 sites you shouldn't be without Groundbreaking websites are all around us, and if you believed every company that positioned itself as the latest, greatest thing, you'd have an awful lot of bookmarks in your browser. Sites come and sites go, but it's rare that one makes enough of an impact on your life to revolutionise how you use the internet. But occasionally sites come along that offer a genuinely new way of finding, storing or curating stuff on the web. We've put together a list of 20 websites we think could let you use the internet in a way you haven't done before, save you time, make you money and let you enjoy yourself in the process. We've found new sites that offer functionalities not found elsewhere, but we've also included a few that have been around for a while, but have really come into their own in recent years. What we do on our PCs is moving increasingly to the cloud, with free storage and utilities becoming the norm. 1. Wouldn't it be nice to cut through all that and make the internet work for you? 2.

Free printable mandala coloring pages New Padagogy Wheel Helps You Integrate Technology Using SAMR Model Sometimes a visual guide comes along and it just makes total sense. That’s how I felt about Allan Carrington’s clever ‘Padagogy Wheel‘ which we featured on Edudemic last week. Check out the previous version then view the one below to see the differences. From what I can tell, putting the wheel on this site has generated a bit of buzz and I’m glad we could help spread the knowledge. But I was quite amazed this morning when I saw that the Padagogy Wheel had been updated. This new Padagogy Wheel (which honestly is less about iPads and more about technology integration now) should encourage you to focus on redefining your current standards, the current role tech plays in your classroom, and just about everything else. Want to print out the poster? The Padagogy Wheel by Allan Carrington is licensed under a Creative Commons Attribution 3.0 Unported License.

2¢ Worth Listen A few weeks ago I worked and attended North Carolina's ISTE affiliate conference. I opened the NCTIES conference with a breakfast keynote address and Marc Prensky closed it with a luncheon keynote the next day. Sadly, I missed the second day of the conference. I would first offer some constructive criticism to NCTIES , and to all such ed-tech conferences across the nation and around the world. You do a fabulous job of offering dynamic learning experiences for teachers who are new to teaching or new to utilizing contemporary information and communication technologies in their classrooms. The only idea I can think of is to have one or two session rooms devoted to unconference topics. Now to the surprises It was in the student showcase, a part of most ed-tech conferences that I often miss, using it as an opportunity to visit the exhibitors or dash up to my room for something or other. “No software. After my hesitation, she continued, “..the game master.” And then, 1 Warlick, David.

The Best Teacher Resources For “Foldables” “Foldables” are basically 3 D graphic organizers. Graphic organizers are great tools to help English Language Learners (and all students) categorize content in a way to make it more accessible to them (you might also want to check-out Not “The Best,” But “A List” Of Mindmapping, Flow Chart Tools, & Graphic Organizers). I’ve found them particularly helpful in Social Studies classes, but they’re useful in all subjects. ”One-dimensional” graphic organizers are equally useful. Foldables, though, generally provide space for more content and are also good for a change-of-pace. Here are my choices for The Best Teacher Resources For “Foldables”: The Catawba County Schools have a great Foldables Page that includes many examples. ELL Classroom has several blog posts describing their use of foldables with English Language Learners. United States History has a number of examples of how foldables can be used to review…United States History. Foldables and Notebookables is from “TeachFine.”

How does Google work? Glenn invited two top executives to talk about how one of the biggest companies of the 21st century stays innovative Glenn has a love/hate relationship with technology. He loves the vision of the future and the freedom it gives people. However, the exponential growth of technology also creates the opportunity for giant companies to get so giant that they can crush the life out of you. Glenn isn’t sure where he stands on some of these big technology companies. Google, being number one in that category because they do some pretty scary things, but they also do some amazing things. GLENN: Hi, guys. SPEAKER: Hi, Glenn. GLENN: Very good. ROSENBERG: It’s Jonathan. GLENN: Thanks for being here. ERIC: Well, this is Eric. ROSENBERG: Glenn, we also point out in the book that there’s a new archetype, a new character that we’re defining, that’s sort of the hero of our book, which is the smart-creative. GLENN: Well, you say here, the culture stems from the founders, best reflected in the trusted team. Can you tell me about that list, and what you’re driving at here? ROSENBERG: Sure. GLENN: I know. GLENN: Okay.