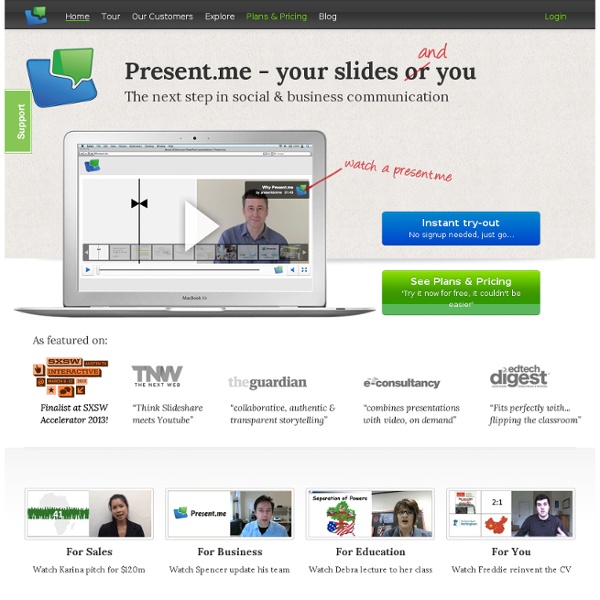 Present.me is SlideShare Meets YouTube Have you ever wondered what would happen if SlideShare and YouTube got hitched and had a child together? If you answered ‘yes’ to that, I’m a little concerned. But if that question has stirred your curiosity, let me introduce you to Present.me. Present.me lets individuals, groups, organisations…anyone…combine online presentations with video, and make them viewable ‘on demand’. “Imagine for a second you were with me in a room right now,” ponders co-founder Richard Garnett,” and I was your teacher, with some maths maybe.

15 Best Free Stock Photo Sites If you’re going to create your own website or slightly modify it then you will surely need quality images. And on this step you will face with dilemma: to buy these images or to download them for free. There are many good quality websites offering royalty free stock photos. 5 Ways to View PowerPoint Presentation on iPad Have a pile of PowerPoint presentation files and wanna view them on your new iPad? Though playing PowerPoint presentation on iPad is wanted for most iPad users, Apple doesn't have a plan to develop any tool for it. The good news is that with some wordarounds, you can view PowerPoint on iPad freely. Below 5 ways are introduced for you to play PPT on iPad. Read on to learn the details. 1. Beginner's Guide to the Inca Empire Overview of the Inca Empire The Inca Empire was the largest pre-hispanic society of South America when it was 'discovered' by the Spanish conquistadors led by Francisco Pizarro in the 16th century AD. At its height, the Inca empire controlled all of the western part of the South American continent between Ecuador and Chile. The Inca capital was at Cusco, Peru, and the Inca legends claimed they were descended from the great Tiwanaku civilization at Lake Titicaca. Origins of the Inca Empire Archaeologist Gordon McEwan has built an extensive study of archaeological, ethnographic, and historical sources of information on the Inca origins.

Pinterest Changes Improve Storytelling In a recent video from NBC Nightly News Ben Silbermann, the founder of Pinterest, shared that his childhood bug collection was part of the story that transformed his passion for nature and science into the third most popular site on the web. Ben developed Pinterest as a place for individuals to share their own stories, interests and passions in a digital sense, with the goal of connecting online inspiration with offline action. When it comes to Pinterest, a hobby as unique as bug collecting can be the start of a story that means so much more. Pinterest is grounded in the simplicity of collecting, sharing and discovering images of inspiration and passion.

Finding Your Peace in The Academy - National Center for Faculty Development & Diversity As the fall semester comes to a close, I find myself having lots of conversations about finding your peace in the Academy. I’ve been thinking about this a lot lately because so many people contact me with the same problem: they are passionate about their scholarship, but they're struggling to figure out how to be in the Ivory Tower. In other words, they love their work, but find themselves working 60-80 hours a week without making progress on the very writing projects they love and sensing they are sacrificing their health and relationships in the process. Trying to figure out how to make it all work is a common struggle for new faculty and trying to figure out if you want to make it work is a common question at every academic rank (from graduate student to endowed chairs). So as we head into the holiday break, it’s a great time to take a step back and think about some steps you can take to find your peace in the Academy.

simplebooklet.com Make in minutes, share online. Build a web booklet from your own content or convert an existing PDF. Our design tool is code free, drag and drop simple. Inca Architecture at Machu Picchu Inca architecture was among the finest prehistoric architecture in the world. Examples can be seen in Cuzco and Ollantaytambo, and of course here at Machu Picchu. The building style is characterized by exquisitely cut masonry, placed together completely without mortar. The raw material was granite, worked by stone and sand into irregular shapes that fit together like a gigantic puzzle. Some stones have as many as thirty facets worked into the surface, and as a result, the faces of the stone fit together so tightly that a needle won't fit between them.

projeqt: A Creative Storytelling Platform by Maria Popova The new language of the creative polyglot, or what tweets have to do with portfolios. Much has been said over the past few years about the future of publishing and content on the web. Terms like “transmedia storytelling” and “cross-platform publishing” are tossed around like giant balls of cotton candy — delicious, fluffy but, ultimately, without much substance. And while certain platforms have made multimedia storytelling possible for publishers and visual artists, none offers a truly holistic proposition.

First Day of Class Activities that Create a Climate for Learning January 9, 2013 By: Maryellen Weimer, PhD in Teaching Professor Blog There’s no discounting the importance of the first day of class. What happens that day sets the tone for the rest of the course. Outlined below are a few novel activities for using that first day of class to emphasize the importance of learning and the responsibility students share for shaping the classroom environment. Best and Worst Classes – I love this quick and easy activity.