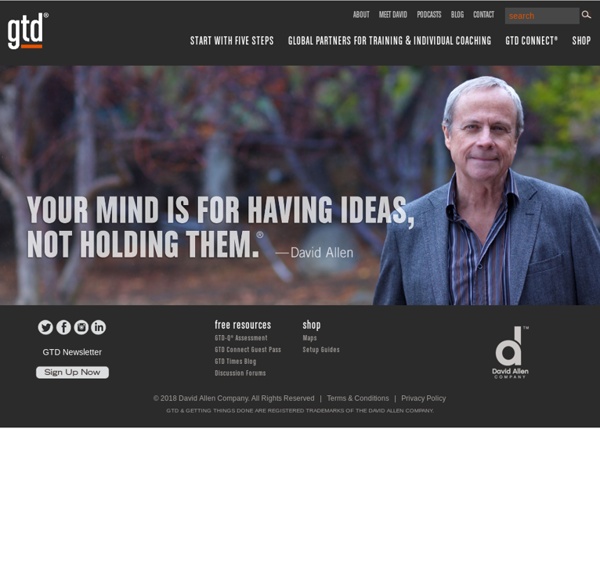 "Productive Living" is our free, educational newsletter. Each month you'll gain a wealth of valuable tips, tricks, and strategies from David Allen and the David Allen Company coaches to help you live a productive life—personally and professionally. Read some sample issues online: Your email address will not be sold or rented to any third parties. To change your address, please unsubscribe the old address and subscribe the new address.

8 challenges to overcome when adopting Holacracy A year and a half ago I first heard about Holacracy: “GTD for your organization”, or so I thought. We started adopting it at my company Springest, and have been learning the hard way ever since. Now that it’s becoming more popular, partly because of Zappos adopting it and the first books coming to market, I’d like to summarize some challenges we encountered. Actually, I thought Holacracy’s popularity would rise much faster. But it didn’t, and I think I know why… Emotional Fitness: How to Calm Yourself in 4 Easy Steps Whether you are aware of it or not, unmanaged emotions often hijack your energy and behavior. The limbic brain, considered the emotional brain, can quickly override rational thinking. The decisions we make determine our quality of life and our future. Try this simple, step-by-step practice to enhance your life and achieve emotional well-being.

Drop the mic: how to be an inspiring speaker Most of us hate public speaking, but for managers, it’s obviously an important skill to have. When you’re an inspiring speaker, it’s easier to sell your ideas internally, rally your team around a plan, talk to customers, present at external conferences, or simply give your team a status update without being super boring. So how can you brush up on your presentation skills and be an inspiring speaker? Attention, Whiny Complainers: NOW's The Time To Make A Diff! “I sort of what to punch you right now. Seriously.” So began an email I received in January of this year from one Unlost reader, Miss Jody Lamb. “But then I’d probably hug you and give you a big high five.

Pro AV news, analysis and comment from Europe’s leading Audio Visual title The extraordinary performances delivered by musical heavyweights in Montreux Jazz Festival’s auditoriums are more than deserving of being treasured in an archive. Zoe Mutter explored how the event is recorded and streamed for audiences around the globe to enjoy. Lady Gaga, Tony Bennett, The Chemical Brothers and Lionel Richie – festival line-ups don’t get much more eclectic. And this is the beauty of the world-renowned, musically diverse Montreux Jazz Festival (MJF).

Olive Oil: Lean Startup & Holacracy: How Do They Fit Together? I just finished a book: The Lean Startup. It's a model for building successful new products/startups extremely efficiently, developed by startup entrepreneur Eric Reis. No genius needed, just a method. I have to say I'm impressed: the theory and the case studies are very convincing. How to Get Hired By Anyone: 5 Foolproof Methods for Landing That J-O-B A few weeks back, I announced that I’d be hiring a HO (Homework Officer– getchyer head out of the gutter!) to help me out with my new project. After laughing for 45 minutes straight at the barrage of hilarious innuendos and email subject lines I received (“Why I’m Your HO”; “Is a HO that doesn’t get paid simply called a SLUT?”

Setting OKRs the Right Way – Step By Step Process Setting OKRs the Right Way – Step By Step Process Setting OKRs (Objectives & Key Results) is a relatively simple process. Here’s a step by step breakdown to show how easy it is to get started on setting your own OKRs. Why It’s OK to be Lost And Confused In the fall of 2007, I was confused as hell. I had recently graduated from college but still had no clue what I wanted to “be when I grew up.” I’d jumped from mediocre job to mediocre job… from a psychosocial therapist to an insurance salesperson to a nanny to a cocktail waitress to a retail manager. After years of having been in a steady relationship, I suddenly found myself single and bombarded by d-bag after d-bag… each of whom I seemed to fall for. And to top it all off, I had no established hobbies or interests aside from partying and trying to impress said d-bags. To say that I was lost would be an understatement.