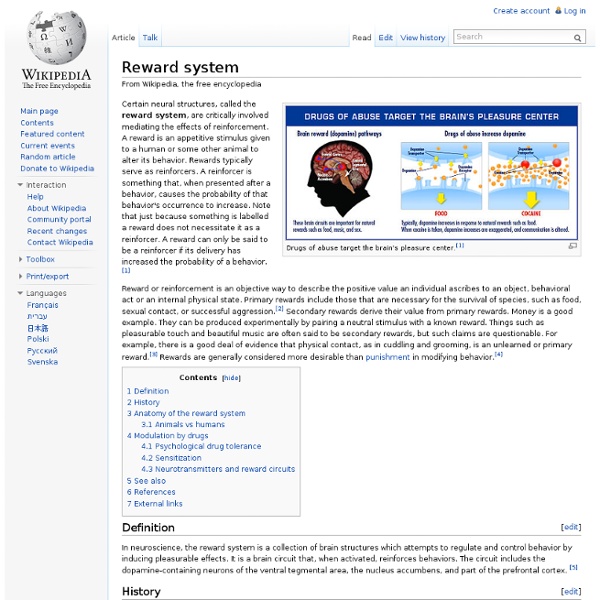 Drugs of abuse target the brain's pleasure center.[1] Certain neural structures, called the reward system, are critically involved in mediating the effects of reinforcement. A reward is an appetitive stimulus given to a human or some other animal to alter its behavior. Rewards typically serve as reinforcers. A reinforcer is something that, when presented after a behavior, causes the probability of that behavior's occurrence to increase. Note that, just because something is labelled as a reward, it does not necessarily imply that it is a reinforcer. Reward or reinforcement is an objective way to describe the positive value that an individual ascribes to an object, behavioral act or an internal physical state. Definition[edit] In neuroscience, the reward system is a collection of brain structures that attempts to regulate and control behavior by inducing pleasurable effects. History[edit] James Olds and Peter Milner were researchers who found the reward system in 1954. Skinner box

7 Ways to Reward Yourself for Greater Productivity Rewards are a powerful way to motivate yourself to get things done. These “carrots” are the entire foundation of my productivity system because they encourage you to delay gratification until you’ve made significant progress with your most important tasks, goals, and daily habits. But in order to make a personal rewards system effective, you’ve got to be creative and you’ve got to customize your rewards list to give YOU incentive. Nobody knows what motivates you as well as you do, so it’s critical to spend time thinking about (even dreaming about) your pots of gold at the end of the rainbow. Here are 7 quick ideas to help make your Personal Rewards list that much more encticing… Nathaniel Branden Early life and education[edit] Nathaniel Branden was born Nathan Blumenthal in Brampton, Ontario, and grew up alongside three sisters, two older and one younger. A gifted student, he became impatient with his studies during his first year of high school and skipped school often in favor of the library.

21 Frugal Ways to Reward Yourself Right Now Wise Bread Picks Like many of you, I’m busy. I have a full-time career, a husband and a home to take care of, and I play daddy to two adorable dogs. I don’t know how I do it, but I do. Sometimes, though, I need a break — a little reward for staying semi-sane. You probably do, too. Stone Age Temple May Be Birthplace of Civilization It's more than twice as old as the Pyramids, or even the written word. When it was built, saber-toothed tigers and woolly mammoths still roamed, and the Ice Age had just ended. The elaborate temple at Gobelki Tepe in southeastern Turkey, near the Syrian border, is staggeringly ancient: 11,500 years old, from a time just before humans learned to farm grains and domesticate animals. According to the German archaeologist in charge of excavations at the site, it might be the birthplace of agriculture, of organized religion — of civilization itself. "This is the first human-built holy place," Klaus Schmidt of the German Archaeological Institute says in the November issue of Smithsonian magazine. • Click here to visit FOXNews.com's Archaeology Center.

50 Tips to Maximize Productivity Here are commonsense yet practical tips on how we can maximize productivity in our daily lives. Try out some of these for yourself and discover which ones work best for you. 1. Write a list of the main tasks you want to complete throughout the day. 2. Start with the most important task first, so you can get it out of the way early and while your mind is most fresh. The Great Debate Contributors: Matt Ridley The Rational Optimist: How Prosperity Evolves Matt Ridley turns from investigating human nature to investigating human progress. In The Rational Optimist Ridley offers a counterblast to the prevailing pessimism of our age, and proves, however much we like to think to the contrary, that things are getting better. Over 10,000 years ago there were fewer than 10 million people on the planet. Today there are more than 6 billion, 99 per cent of whom are better fed, better sheltered, better entertained and better protected against disease than their Stone Age ancestors. The availability of almost everything a person could want or need has been going erratically upwards for 10,000 years and has rapidly accelerated over the last 200 years: calories; vitamins; clean water; machines; privacy; the means to travel faster than we can run, and the ability to communicate over longer distances than we can shout.

7 Secrets of the Super Organized A few years ago, my life was a mess. So was my house, my desk, my mind. Then I learned, one by one, a few habits that got me completely organized. Am I perfect? Of course not, and I don’t aim to be. But I know where everything is, I know what I need to do today, I don’t forget things most of the time, and my house is uncluttered and relatively clean (well, as clean as you can get when you have toddlers and big kids running around). Marc Tessier-Lavigne Marc Trevor Tessier-Lavigne (born c. 1960) is a neuroscientist who is president of The Rockefeller University in New York City. He was formerly executive vice president for research and the chief scientific officer at Genentech. Tessier-Lavigne succeeded Nobel laureate Paul Nurse. He is the first industry executive to assume the Rockefeller presidency.[1]

Time management Time management is the act or process of planning and exercising conscious control over the amount of time spent on specific activities, especially to increase effectiveness, efficiency or productivity. It is a meta-activity with the goal to maximize the overall benefit of a set of other activities within the boundary condition of a limited amount of time. Time management may be aided by a range of skills, tools, and techniques used to manage time when accomplishing specific tasks, projects, and goals complying with a due date. Initially, time management referred to just business or work activities, but eventually the term broadened to include personal activities as well. A time management system is a designed combination of processes, tools, techniques, and methods.

The Henry G. Friesen International Prize in Health Research The 2012 Henry G. Friesen International Prize is awarded to Canadian Neuroscientist Marc Tessier-Lavigne, President of Rockefeller University. The Prize, established by the Friends of Canadian Institutes of Health Research (FCIHR) in collaboration with the Canadian Academy of Health Sciences, recognizes exceptional innovation by a visionary health leader of international stature. President Tessier-Lavigne will receive the Prize and deliver a public lecture on September 19, 2012 in Ottawa. A quintessential translational scientist in the study of brain development, Dr.

Knowledge Management Knowledge management (KM) is the process of capturing, developing, sharing, and effectively using organizational knowledge.[1] It refers to a multi-disciplined approach to achieving organisational objectives by making the best use of knowledge.[2] An established discipline since 1991 (see Nonaka 1991), KM includes courses taught in the fields of business administration, information systems, management, and library and information sciences.[3][4] More recently, other fields have started contributing to KM research; these include information and media, computer science, public health, and public policy.[5] Columbia University and Kent State University offer dedicated Master of Science degrees in Knowledge Management.[6][7][8] History[edit] In 1999, the term personal knowledge management was introduced; it refers to the management of knowledge at the individual level.[14] Research[edit] Dimensions[edit]