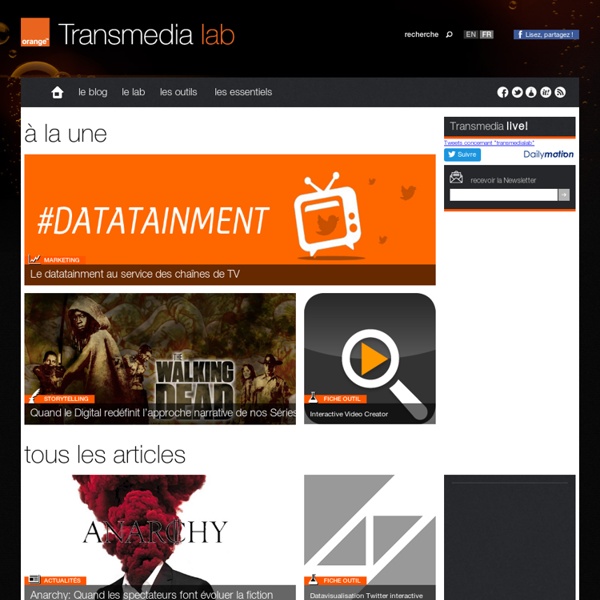 Game of Thrones is Transmedia Gold « Tyrion Lannister: Little Man, Big Plans (via Frank Rose) Unless you’ve been hiding out on the moon or under a very large , heavy object for some time, you might have well heard of the big chunk of fantastical fun that is HBO’s Game of Thrones series. Behold, those in the know: the fun hasn’t stopped with the book series turned television series– ho ho, NO — as Campfire NYC has deftly wielded its mighty storytelling skills to transcend the traditional with a transmedia campaign at the core of its marketing push. Marketing agency Campfire gave Steve Coulson and their resident band of brainiac’s the mission of creating a transmedia campaign for HBO’s epic series Game of Thrones. Brilliant move, pulling in audiences old and new to the series, its stories and characters all the while providing deep, immersive experiences to those keen to play along.

Starved for Attention Blog NEW YORK, JULY 24, 2012—A groundbreaking multimedia documentary series exposing global childhood malnutrition, a collaboration between the international medical humanitarian organization Doctors Without Borders/Médecins Sans Frontières (MSF) and the renowned VII photojournalism and media company, has been nominated for a News and Documentary Emmy Award, a milestone recognition of an innovative form of advocacy journalism. The joint project, Starved for Attention, is composed of eight short multimedia documentaries, spanning reportage in nine countries. Collectively, they present a multi-faceted perspective of childhood malnutrition, a preventable and treatable condition that nonetheless claims the lives of millions of children every year. “The nomination is a notable validation of a highly collaborative and innovative story telling model,” said Stephen Mayes, managing director of VII Photo and co-executive producer of Starved for Attention.

Movies and video games: Watch a great video essay on transmedia. (VIDEO) Matthias Stork Movies and video games have been closely linked for some time now, from cinematic adaptations to promotional tie-ins, and it’s no secret that the two media have increasingly come to resemble each other over the last 20 years. With a great video essay posted on UCLA’s film studies site Mediascape, M.A. student Matthias Stork takes these simple facts and creates a compelling visual argument as to how each medium continues to inform the other. “Transmedia Synergies: Remediating Films and Video Games” is as scholarly as it sounds—but it's also entirely accessible thanks to the straightforward narration and, especially, Stork’s visual storytelling.

20 Creative Ways to Upcycle Pallets in your Garden Inspiring Pallet Gardening Ideas Recently I upcycled a pallet and large square wooden crate lying around a local landscaping yard into a mini garden shed for $7. I was so pleased with the result it made me consider other ways to reuse materials for my garden needs. With more of us conscious of repurposing rather than impacting on landfill with unnecessary waste, I thought I’d share these DIY creative ideas to upcycle free wood pallets.

. . . And the Final Lesson from Game of Thrones Is, "Always Support the Bottom" When Campfire's Steve Coulson set out to create an immersive experience around the HBO production of George R. R. Martin's Game of Thrones, he faced a now-familiar problem: How to simultaneously generate buzz for the show, introduce the story to a new audience, and provide a deeper level of engagement for fans of the book. In this case, the task was complicated by the fact that HBO audiences weren't expecting a fantasy series and that Martin fans were fiercely protective of his work.

Transmedia 202: Further Reflections The above video was shot by Scott Walker during one of my presentations at San Diego Comic-Con, during which I spoke about some of the controversy which has surrounded the definition of transmedia over the past six months or so. I’ve largely stayed out of these conversations, though you can find a very good summary of the debates here. I’ve been focusing on other projects and also I’ve been more interested in the shapes these discussions take than seeking to intervene in them directly, but over the summer, in a range of venues, I’ve been pushing and proding at my own definitions to see if I can capture some of my own shifting understandings of transmedia, especially as I am preparing to teach a revamped transmedia entertainment class at USC. Today, I am going to try to put some of this still evolving thinking into writing in hopes that it helps others sort through these issues. So, consider what follows Transmedia 202, to compliment my earlier Transmedia 101 post.

Transmedia Resources DRAFT - this is a no-profit site that is a continuous work in progress - short quotes from the collected resources are included, if you do not wish any of your resource quoted, let me know and I'll remove the quote docwho2100@gmail.com UPDATE - April 6, 2014 - It has been awhile - but I still am around, still have been collecting sources and still intend to continue plugging things in. Hope to start adding more again within the month - ahhh the life of an archivist!!! Transmedia is used in many different ways leading to the need to use the surrounding context to determine full meaning (in a way, the very definition of transmedia has a transmedial property to it ;)