The Art of Alejandro Burdisio. Pakistani Artist's Concept Art Of A Sci-Fi Pakistan Will Blow You Away - Trending Pakistan. Sci-Fi and Fantasy fans get ready to be blown away by what you are about to see. 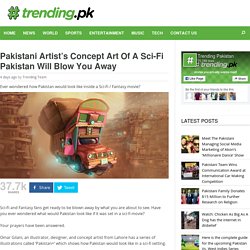 Plutchik's Color Wheel Of Emotion. An open drawing project. Pencils, Pixels and the pursuit of Awesomeness. By Bryan Tillman Now I want to talk about shapes. 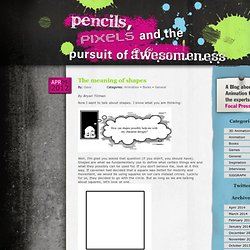 I know what you are thinking: Well, I’m glad you asked that question (if you didn’t, you should have). Shapes are what we fundamentally use to define what certain things are and what they possibly can be used for. If you don’t believe me, look at it this way. The use of Silhouettes in Concept Design. Silhouette thumbnails are among the most helpful and productive methods of design when it's necessary to produce a large quantity of variations of concepts within a short period of time. 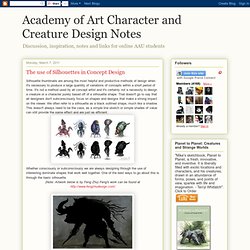 It's not a method used by all concept artist and it's certainly not a necessity to design a creature or a character purely based off of a silhouette shape. That doesn't go to say that all designers don't subconsciously focus on shapes and designs that make a strong impact on the viewer. We often refer to a silhouette as a black outlined shape, much like a shadow. This doesn't always need to be the case, as a simple line sketch or simple shades of value can still provide the same effect and are just as efficient.

Whether consciously or subconsciously we are always designing through the use of interesting dominate shapes that work well together. (Note: Designs by Ben Mauro, copyright Sony Pictures Animation) Ben's work can be found at The Art of Ben Mauro (Note: Artwork below is by Feng Zhu) Www.imaginefx.com/02287754331827093439/tutorial.pdf. Digital Painting 101: The Complete Guide. Character Design 2: Primer. Animation character development. Character Design References (characterdesigh) on Pinterest. Creating Hero Versus Villain Character Archetypes – Vector Premium Tutorial. Little girls R better at designing heroes than you. Little Girls Are Better At Designing Superheroes Than You is a project where superheroes are drawn based on the costumes of young girls. 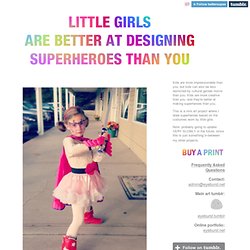 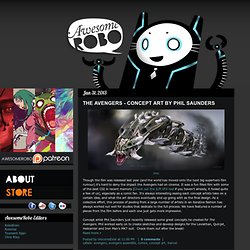 The concept for the game is solid, with a plotline spanning between the events of Aliens and Alien 3 regarding a search team with orders to investigate the U.S.S. Sulaco and figure out what happened to Ripley, Colonel Hicks and the rest of the team dispatched to LV-246. From a story sense, the game is so canon that the title is officially a part of the Aliens franchise. But then came this 'Kickass trailer,' which has raised quite a few eyebrows among fans and even Gearbox employees alike. The trailer brings us dubstep, awful voice overs contradicting earlier trailers with a macho marine spouting out the types of phrases you'd expect from the latest Call Of Duty trailer. Compare the above trailer to the actual story trailer released a few weeks earlier, above. 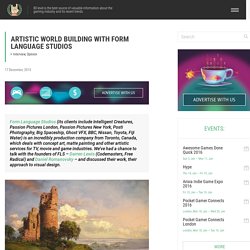 We’ve had a chance to talk with the founders of FLS – Darren Lewis (Codemasters, Free Radical) and Daniel Romanovsky – and discussed their work, their approach to visual design. © Form Language Studios, 2015-2016 Could you introduce yourself and talk a little about your company?