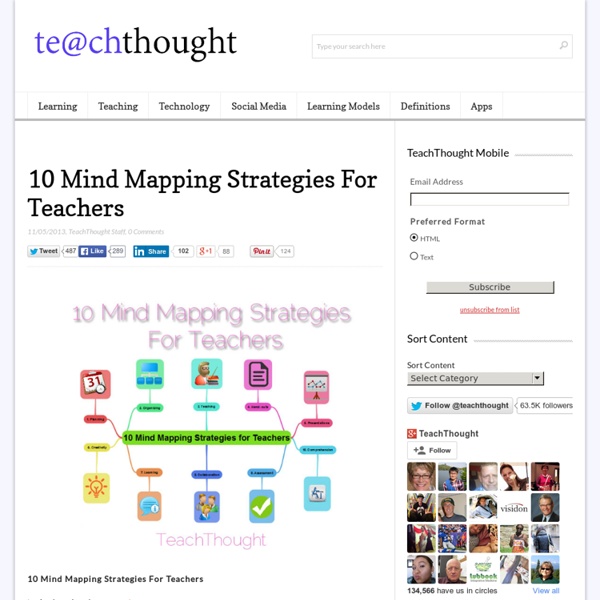 10 Mind Mapping Strategies For Teachers by Andrea Leyden, examtime.com The adoption of Mind Maps in teaching has grown recently due to the benefits of using Mind Maps to learn and the availability of free online mind mapping software. Teachers have recognized the value of using Mind Maps to engage students, encourage creativity and, most importantly, teaching how to learn rather simply memorizing content. How do teachers harness the full power of Mind Mapping? Mind Mapping Strategies for Teachers Pre-class: Planning: Whether its lesson plans, design of your class curriculum for the school year or planning an assignment timeline, Mind Maps give you a clear and visual overview of what needs to be covered.Organizing: If you’re the type of person who regularly jots down ideas and thoughts, Mind Maps are the perfect tool to create structure and organization of a topic. In-class: Teaching: Online Mind Maps can be used in class to brainstorm and generate discussions. Outside class:

Common Core in Action: Writing for an Audience What is new and different in the Common Core? When it comes to the writing standards, a heavy emphasis on audience for one thing, and this is very good news. The "audience" for student writing was once the lone teacher sitting after school with her cup of coffee, a red pen, and a stack of essays or other writing projects. Let's take a look at the Common Core Anchor Standard in Writing that highlights audience. CCSS.ELA-Literacy.CCRA.W.4: Produces clear and coherent writing in which the development, organization, and style are appropriate to task, purpose, and audience. When asked, many kids, and even adults, might tell you the main difference between "school" writing and real-life writing is that the latter has an audience and the other does not. Keeping It Real Back to anchor writing standard 4. So let's consider then some ways to engage students in real-life writing, starting in second grade: Second grade: Ask the children to write about one of their favorites (person, pet, place).

Mind Mapping in My Classroom with MindMeister Editor’s note: Winners of the MindMeister giveaway are announced in the Comments! Mind Mapping is one of the hot buzzwords being thrown around in the world of pedagogy. What exactly are Mind Maps? Well, in simple terms, they’re those old bubble brainstorming maps that we were all forced to draw in the 8th grade. Personally, mine were always much less colorful and dynamic! However, Mind Mapping has come a very long way in recent years, especially with the assistance of technology. In this post I want to highlight my favorite Mind Mapping program – MindMeister — and talk about several ways I use mind maps in my classroom. There are many similar products out on the market today (both free and fee-based), but what sets MindMeister apart (in my mind) is that it provides simultaneously collaborative brainstorming and visualization tools using cloud technology. As you can see, MindMeister has numerous features and allows a great deal of flexibility and creativity. MindMeister in the Classroom

360 Degree Aerial Panorama | 3D Virtual Tours Around the World | Photos of the Most Interesting Places on the Earth | AirPano.com Concept Maps Classroom Strategies Download a Graphic Organizer Word Doc (111 KB)PDF (127 KB) Background A concept map help students visualize various connections between words or phrases and a main idea. Most are comprised of words or phrases surrounded by a circle or square that connect to one another and ultimately back to the main idea through graphic lines. Benefits Concept maps have been shown to support struggling readers (Lovitt & Horton, 1994) by building off of students' prior knowledge and asking them to reflect on their understanding while reading. Create and use the strategy There are several ways to construct concept maps for middle and high school students. Model for your students how you identify the major ideas presented in a reading as you read.Organize your ideas into categories if applicable to the type of concept map you chose. You can use concept maps as a pre-reading strategy by inviting students to share what they already know about a particular concept. References

Using the iDiary for Kids App As A Thinking Book My classroom, for the most part is paperless. My students do not have notebooks, or binders, or folders that contain copious amounts of paper that will end up in the recycle bin as soon as they are able to bring it home. My students sit at desks, however, they rarely use the inside of them. Once students have filled out the preferences page and saved it, they can enter the app, and choose the book they want to work in (if you have more than one student using the iPad or the student has more than 1 book you can have multiple books on this page). The student chooses their book and enters their password. A great addition to this app is when the student starts to type, the book automatically enters a time stamp to the page in the column. How did I introduce this book to my students, you ask?

Concept map An Electricity Concept Map, an example of a concept map A concept map or conceptual diagram is a diagram that depicts suggested relationships between concepts.[1] It is a graphical tool that designers, engineers, technical writers, and others use to organize and structure knowledge. A concept map typically represents ideas and information as boxes or circles, which it connects with labeled arrows in a downward-branching hierarchical structure. The relationship between concepts can be articulated in linking phrases such as causes, requires, or contributes to.[2] Overview[edit] A concept map is a way of representing relationships between ideas, images, or words in the same way that a sentence diagram represents the grammar of a sentence, a road map represents the locations of highways and towns, and a circuit diagram represents the workings of an electrical appliance. Concept maps were developed to enhance meaningful learning in the sciences. Differences from other visualizations[edit]

Concept Maps at the Beginning, Middle, and End I’ve been collecting links to resources on the use of visual thinking in teaching and learning. Here are three resources that go well together. Each is an example of the use of concept maps in a physics class. At the Beginning – “Physics 292: The Big Picture” is a Prezi that Ian Beatty (UNC-Greensboro) shared with his physics class last August. Mind Mapping Software - Create Mind Maps online Concept Maps Concept maps are graphical tools for organizing and representing knowledge. They include concepts, usually enclosed in circles or boxes of some type, and relationships between concepts indicated by a connecting line linking two concepts. Words on the line, referred to as linking words or linking phrases, specify the relationship between the two concepts. We define concept as a perceived regularity in events or objects, or records of events or objects, designated by a label. A concept map is a 2-dimensional node-link representation that depicts the most important concepts and relationships. Another characteristic of concept maps is that the concepts are represented in a hierarchical fashion with the most inclusive, most general concepts at the top of the map and the more specific, less general concepts arranged hierarchically below. Another important characteristic of concept maps is the inclusion of cross-links. Identify, list and rank order 15 to 25 key concepts