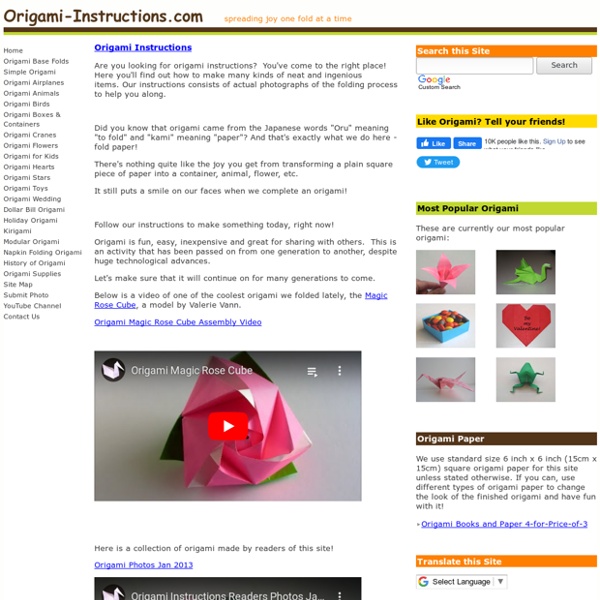 Are you looking for origami instructions? You've come to the right place! Here you'll find out how to make many kinds of neat and ingenious items. Our instructions consists of actual photographs of the folding process to help you along. Did you know that origami came from the Japanese words "Oru" meaning "to fold" and "kami" meaning "paper"? And that's exactly what we do here - fold paper!

robert lang - origami Background In 1989, I wrote an article for the magazine Engineering & Science about the state of technical folding, which, even then, seemed to be progressing by leaps and bounds due to an infusion of scientific and mathematical principles. In recounting some of the connections between origami, math, and technology, I wrote: Computing succumbed to the appeal of folded paper when, in 1971, Arthur Appel programmed an IBM System 360 computer to print out simple geometric configurations at the rate of more than one hundred a minute.

FREE EASY ORIGAMI FLOWERS « EMBROIDERY & ORIGAMI Origami Money Flowers: Origami Money Flowers | Simple Design Learn how to make free simple origami money flowers from US dollar bill or any other currency that you have. Currently providing step by step origami Easy Origami Folding Instructions : How to Make an Origami Flower Origami Dragon Folding Instructions - How to Make Origami Dragon - How to fold Origami Dragon The origami dragon is challenging but fun to make. It is not for begineers, but if you have made the origami bird base and the origami flapping bird, then you should be able to follow the steps below. Made this origami? Submit your photo to us!

Book Page Corner Heart Origami Bookmark This is another heart tutorial. Is the 'book page' trend over yet? I sure hope not, because I just love the look of this corner bookmark folded from a book page. The great thing about origami is that it is cheap and anyone can do it - with the proper instructions. When I was a kid, my parents bought me an origami book (from Thailand, all in Thai!). I was so excited to get it until I started to attempt to make the figures. How to Make Paper Lanterns - Cute Round Oriental Style Looking for instructions on how to make paper lanterns? My husband designed an easy template for making paper lanterns in a cute round shape. They look a bit oriental, don’t you think? These “lanterns” are purely decorative and aren’t designed to have a lamp inside them, but they do make great festive decorations.

animal origami cat animal origami cat l origami-how to make a origami flower,origami flower instructions animal origami cat 40 Amazing Papercraft Templates for the Geek Inside You - Speckyboy Web Design Magazine When considering papercraft, your first thought will most likely be of all that boring stuff you made in school, like paper flowers, printable seasonal cards or even scrap-booking. It doesn’t exactly sound like a hobby that stimulates much excitement, for the most of us anyway. How wrong you are. In actual fact, papercraft can be really cool and loads of fun, especially when you build one of the geeky printable templates we have for you in this post. Can’t afford a Mac? Build your own paper version.

R2-D2 Star Wars Papercraft Friday, 29 July 2011 12:59 Julius Perdana Star Wars I want to replace an astronaut papercraft figurine that has been on my car dashboard for almost a year. I know there is already R2D2 papercraft model kit out there, made by a japanese papercraft designer, but I want to make it my own version, Paper Replika version :). My templates are a lot simpler compare to the existing one and I need a quick build but still looking good. So here it is 5 pages templates of Artoo droid papercraft model kit.