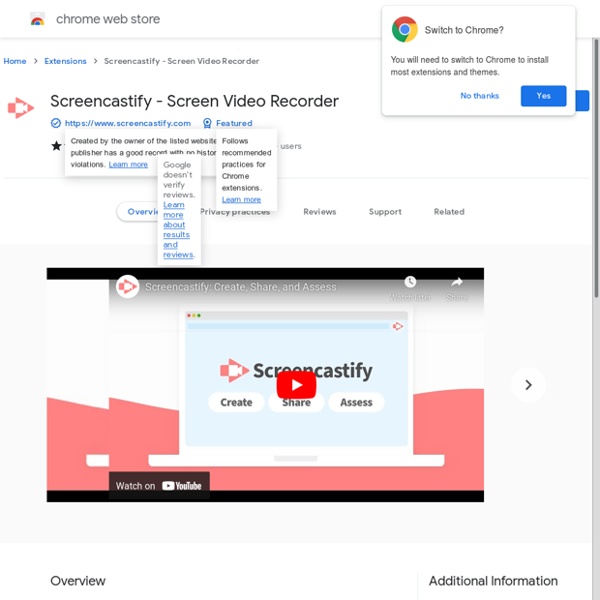 100 Best Chromebook Tips, Tricks and Time Savers Getting started with a Google Chromebook is very easy so is being a normal Google Chromebook user. But to be a power user, you need to know some tips, tricks and secrets. Here is a few to get you started! 免費線上錄音, 5分鐘內免費. 免安裝, 只要用web 即可 Microphone access error You have denied access to your microphone. Allow access to your microphone Click "Share Selected Device" in the Firefox permission dialog. It's usually located in the left upper side of the window (See an example). AirPlay/DLNA Receiver (PRO) - Google Play Android 應用程式 This is the re-publishing of "AirPlay/DLNA Receiver(PRO)" which was first released on Google Play in Oct. 2012 and used to be downloaded for about 8000 times.If the version(2.4.7 or earlier) you purchased in the past can't be upgraded or can not be found in your account after being uninstalled or "unauthorized" message pops out, please do contact us. NOTE: This is a receiver installed on Android devices such as Boxes or TVs to receive media sent from your Apple devices, PC, and Android devices via AirPlay or DLNA protocol. It's not a sender. If the app doesn't work perfectly on your device, please CONTACT us via email(waxraindev@gmail.com), and we will try our best to solve it. Whether we could solve the problem, we can make a REFUND.NOTE: You should uninstall other AirPin versions before installing this one.

指定看Youtube的開始時間與結束時間 This is a tutorial on how to link to only a certain Part of Youtube video from a specific starting point to end point. You may ask why should I link to only a part of a Youtube video? Let’s say you were watching a Youtube and found a particular scene amusing and wanted to share just that scene with your friends. Usually, when you share a link, your friends will be forced to see the whole video from beginning to end and they may not have the patience to go to the scene. Sometimes in your blog, you may want to redirect your viewers only to a certain part of a video. You can do all these things using the below method. 60 Smarter Ways To Use Google Classroom 60 Smarter Ways To Use Google Classroom by TeachThought Staff Google Classroom is quietly becoming the most powerful tool in education technology.

What to do When Your Chromebook is Offline Chromebooks are designed for a connected world. But what happens when you are offline? Is your Chromebook still useful? Can I work from a Chromebook when it is offline? By default, Chromebooks are useful to some extend even without a working internet connection. 微軟免費 Office 整合 Google 瀏覽器，雲端管理文件更方便 以往如果要開啟或編輯 Office 文件，必須在電腦上安裝 Office 相關軟體，不過微軟去年推出 Office Mobile 應用程式後，已經能從手機、平板電腦來編輯文件，甚至在沒有安裝 Office 的情況下，也能直接從雲端開啟 Word、Excel、PowerPoint。目前支援的管道越來越多樣，這也表示使用者無論在任何情境、任何裝置下，皆能用 Office 來編輯文件，與你的工作或生活完全整合。 今天，微軟於 Chrome 線上商店推出 Office Online for Chrome 擴充功能，嚴格來說它並不是一個獨立應用程式，比較像是 Google 的「Office Editing for Docs, Sheets & Slides」擴充功能，將現有的雲端服務整合到瀏覽器中。

AirPlay/DLNA Receiver (LITE) - Google Play Android 應用程式 NOTE: "AirPlay/DLNA Receiver (LITE)" is a free version of "AirPlay/DLNA Receiver" and supports iOS6/7/8/9/10 without screen mirroring. The professional version is "AirPlay/DLNA Receiver (PRO)" which fully supports iOS6/7/8/9/10, works more stably and gives you more features and much better experience. NOTE: If you install it on Android 3.1 or greater, please do run this app at least once after installation or update, then the AirPin auto boot service can be registered to the Android system. Forget AppleTV. Use your Android device or phone (Android TV/Set-Top Box/Mini PC are preferred) to receive videos, pictures, and music wirelessly from multiple devices. Once the app is installed (and you've run it after installation) it runs in the background waiting to receive the media you send to it from another device.