District 1:1 Programs - iPad vs. Chromebook (or Both?) 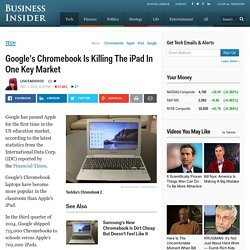 Google has passed Apple for the first time in the US education market, according to the latest statistics from the International Data Corp. (IDC) reported by the Financial Times. Google's Chromebook laptops have become more popular in the classroom than Apple's iPad. In the third quarter of 2014, Google shipped 715,000 Chromebooks to schools versus Apple's 702,000 iPads. Experts say the Chromebook has potential to dominate the education market. Why Google's Chromebooks are beating Apple's iPads in the classroom. For several months earlier this year, our family toured various middle schools in Oakland, trying to figure out where to enroll our oldest son. 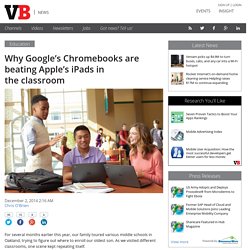 Six Reasons Educators Say They Are Choosing Chromebooks Over iPads, Netbooks And PCs. Schools lament shortcomings of Apple's iPad as some opt instead for Chromebooks. By Sam Oliver Even as Apple's education sales boom, some schools have begun to transition students and classrooms away from the iPad in favor of laptops — including Google's cheap cloud-based Chromebooks — as weaknesses have begun to emerge with the tablet form factor. 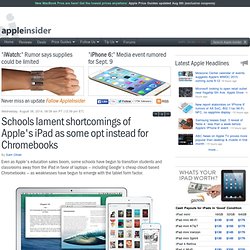 Some teachers and administrators — such as those in Hillsborough, New Jersey — cite the lack of a physical keyboard on the iPad as a major drawback, according to The Atlantic. Hillsborough chose Google's Chromebooks following a year-long trial of both devices. 3 Reasons Why Chromebook Beats iPad in 1:1 Programs. The Chromebook vs. iPad debate may be one that we never resolve. 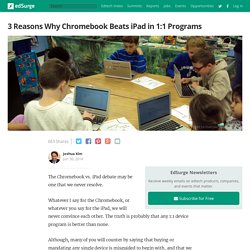 Whatever I say for the Chromebook, or whatever you say for the iPad, we will never convince each other. The truth is probably that any 1:1 device program is better than none. Although, many of you will counter by saying that buying or mandating any single device is misguided to begin with, and that we should be focusing on a BYOD (bring your own device) structure and diving deeply into the world of VDI (virtual desktop infrastructure).

3 Reasons Why Chromebook Beats iPad in 1:1 Programs. iPad vs. Chromebook For Students. As popular as the iPad has been for end consumers, schools have also been a major part of the tablet’s success. 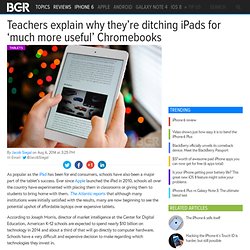 Ever since Apple launched the iPad in 2010, schools all over the country have experimented with placing them in classrooms or giving them to students to bring home with them. The Atlantic reports that although many institutions were initially satisfied with the results, many are now beginning to see the potential upshot of affordable laptops over expensive tablets. According to Joseph Morris, director of market intelligence at the Center for Digital Education, American K-12 schools are expected to spend nearly $10 billion on technology in 2014 and about a third of that will go directly to computer hardware. Schools have a very difficult and expensive decision to make regarding which technologies they invest in. Shortly after tablets had swept the nation, many schools began rethinking their decisions.

The Great Debate: iPads vs. Chromebooks. The iPad vs. 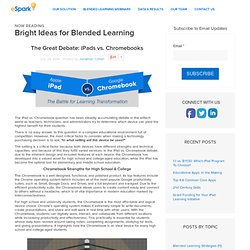 Chromebook question has been steadily accumulating debate in the edtech world as teachers, technicians, and administrators try to determine which device can yield the highest benefit for their students. There is no easy answer to this question in a complex educational environment full of competition. However, the most critical factor to consider when making a technology purchasing decision is to ask, "In what setting will this device be used? " The setting is a critical factor because both devices have different strengths and technical capacities, and because of this they fulfill varied services.

In the iPad vs. iPads vs. Chromebooks in a 1:1 Environment. Many schools are looking into 1:1 programs and the specific devices that can make up the foundation of these programs. 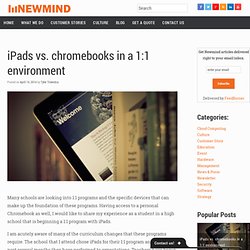 Having access to a personal Chromebook as well, I would like to share my experience as a student in a high school that is beginning a 1:1 program with iPads. I am acutely aware of many of the curriculum changes that these programs require. Why We Are Misunderstanding the Chromebook iPad Debate. EdSurge Newsletters Receive weekly emails on edtech products, companies, and events that matter. 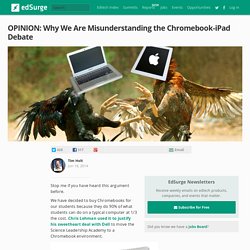 Stop me if you have heard this argument before. We have decided to buy Chromebooks for our students because they do 90% of what students can do on a typical computer at 1/3 the cost. Chris Lehman used it to justify his sweetheart deal with Dell to move the Science Leadership Academy to a Chromebook environment. Okay, I get it. I get it. The Chromebook vs. iPad Debate. Tim Holt is the director of technology for the El Paso school district. 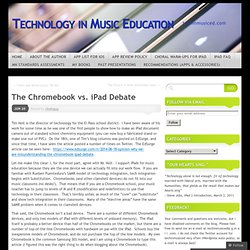 I have been aware of his work for some time as he was one of the first people to show how to make an iPad document camera out of standard school chemistry equipment (you can now buy a fabricated stand or make one out of PVC). On the 18th, one of Tim’s blog columns was posted on EdSurge, and since that time, I have seen the article posted a number of times on Twitter. The EdSurge article can be seen here: Let me make this clear: I, for the most part, agree with Mr. MacBook, Chromebook, iPads: Why Schools Should Think Beyond Platforms. iPad or Chromebook: 4 Questions To Ask Before Choosing. Crude mashup for your enjoyment. 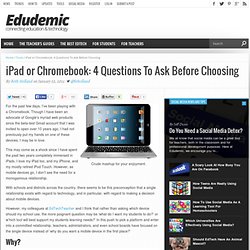 For the past few days, I’ve been playing with a Chromebook. Though I have been an advocate of Google’s myriad web products since the beta-test Gmail account that I was invited to open over 10 years ago, I had not previously put my hands on one of these devices. I may be in love. This may come as a shock since I have spent the past two years completely immersed in iPads. I love my iPad too, and my iPhone, and my mostly retired iPod Touch. Debating iPads or Chromebooks for 1:1? Why not both? Mobile Computing | Feature Debating iPads or Chromebooks for 1:1? Why not both? As more school districts consider 1:1 initiatives, they are faced with the decision of which device to roll out. Chromebooks and iPads are two popular choices, but instead of choosing between them, some innovative school districts are deploying both.

Spring Lake Public Schools in Michigan, Sioux Falls School District in South Dakota, Winneconne Community School District in Wisconsin, and the Academy for Urban School Leadership (AUSL), a nonprofit organization that manages 25 Chicago Public Schools, have implemented or plan to implement both iPads and Chromebooks in the classroom. The Great Device Debate: iPad Vs. Chromebook. Editor’s Note: In December of 2012, Help Desk blogger Tyler Desharnais authored an excellent post titled “The New Chromebook v. the iPad” which was quite popular. The post was shared via Twitter 126 times, Facebook 18 times, LinkedIn 5 times, and has had 4,062 views (and climbing) since it was first published, making it the second most popular Help Desk post to date; not bad for a high school student! Hard to believe there are schools across the country that still don’t believe and/or understand why students should be blogging…anyway… Chromebooks and iPads: Rivals No More. Whether you’re a teacher or an administrator, you may be asking yourself, “Chromebooks or iPads for my classroom?”

If a school is looking to go 1:1, which one is the better choice? This hotly-debated question peppers the educational landscape as districts seek to invest money in devices that will engage and enhance student learning. Although iPads and Chromebooks target the same industry, they are marketed in different ways. iPads are positioned as recreational tools with a variety of apps, while Chromebooks boast a professional appeal with business-oriented programs. Chromebook vs. iPad - Chromebook Classroom. Why Some Schools Are Selling All Their iPads. For an entire school year Hillsborough, New Jersey, educators undertook an experiment, asking: Is the iPad really the best device for interactive learning? It’s a question that has been on many minds since 2010, when Apple released the iPad and schools began experimenting with it. The devices came along at a time when many school reformers were advocating to replace textbooks with online curricula and add creative apps to lessons.

Some teachers welcomed the shift, which allowed their students to replace old poster-board presentations with narrated screencasts and review teacher-produced video lessons at any time. Four years later, however, it's still unclear whether the iPad is the device best suited to the classroom. Meanwhile, the cost of equipment is going down, software is improving, and state policies are driving expectations for technology access. However, the L.A. district quickly recalled about 2,100 iPads from students. Hillsborough took a different approach.