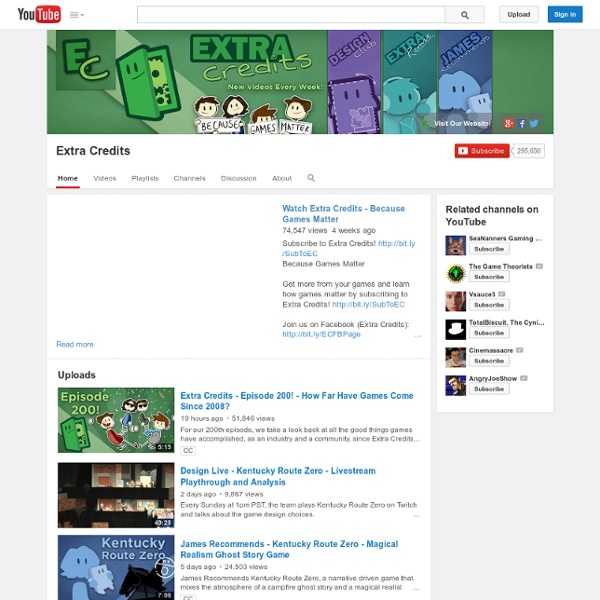 Five Best Practices for the Flipped Classroom Ok, I'll be honest. I get very nervous when I hear education reformists and politicians tout how "incredible" the flipped-classroom model, or how it will "solve" many of the problems of education. It doesn't solve anything. It is a great first step in reframing the role of the teacher in the classroom. How we Built an iOS game on PC: Part 2/4 Building the Core This series chronicles Catch the Monkey from ideation to sale worldwide in the App Store.You can read other articles in this series here:Part 1: Design & PrototypingPart 3: Balancing & PolishingPart 4: Testing, Release, and Marketing Intro In the first article, we covered how Catch the Monkey started from initial simple concept, to the technology we chose, through the prototyping phase. At the end of prototyping we had a greatly increased design, but despite knowing better, we didn’t document it thoroughly.

List of Wilfred Episodes Each episode of the series typically revolves around Wilfred helping Ryan to some achievement, the object of which serves as the title of the episode. For example, the first three episodes of the series are titled "Happiness", "Trust", and "Fear". Each also opens with a quote concerning the title, after which every word but the title disappears.[1][2] Geek & Sundry Welcome to Spellslingers, a show based on the phenomenally popular card game, Magic: The Gathering. Presented by Sean Plott of Day9TV, prepare to experience fun-filled, fast-talking and adrenaline-paced battles that highlight the latest MTG cards. This week's challenger is Greg Miller from IGN!

Coursera.org About the Course Gamification is the application of digital game design techniques to non-game contexts, such as business, education, and social impact challenges. Video games are the dominant entertainment form of modern times because they powerfully motivate behavior. Game mechanics can be applied outside the immersive environments of games themselves, to create engaging experiences as well as assign rewards and recognition. Kongregate talks about making money from online games Unlike most talks on the subject, Kongregate used real world numbers and lots of them. The idea is simple, if you are making a game for online play, there are several options on how to generate income from it, some of which work better than others. Many work well, others fall flat, and once again, tried and true wisdom doesn’t come close to some of the things Kongregate was seeing.

Smallville HD video codec is missing: Watch Featured Movies Smallville Smallville Links Season 1 How to Make Your Video Go Viral And, let’s be honest, most of it is cringe-worthy. While the vagaries of taste and timing determine which videos go viral and which YouTube channels develop large and loyal followings, it’s easier to tell which videos will make viewers feel as if they can’t click away fast enough. It boils down to narcissism.

The "Invent with Python" Blog — “I Need Practice Programming”: 49 Ideas for Game Clones to Code So you know a little bit about programming (perhaps you've read the free book, "Invent Your Own Computer Games with Python", a free programming book for beginners whose author shamelessly plugs at every chance) but you want to get better at coding. You can't seem to find any open source projects that are at your level or easy for new people to contribute to. You've gone through a few of the practice problems at Project Euler but you want to create something more substantial, or at least a cool thing you can show your friends. (Not that finding the 31337th prime number isn't cool.) Here's a list of game clone ideas for you to implement. Each has a short description of the game, links to videos of the game, and descriptions of what kind of algorithms you'll need to know in order to implement them.

Season 2 and Episode 12 Bones: Brennan and Booth are called to the scene of a deadly fire at a D.C. prison to investigate what they believe is the death of Brennans incarcerated adversary, serial killer Howard Epps, whose body was found burned beyond recognition. But Brennans examination leads to the chilling realization that the charred body is not Epps, but that of a D.C. fireman Epps killed in order to fake his own death and escape from a maximum security prison amid the commotion of the fire. After paying a visit to Epps former wife, Caroline, to determine if she has any clue as to his whereabouts, Brennan and Booth leave empty-handed, but are concerned for Carolines safety with her ex-husband on the loose.