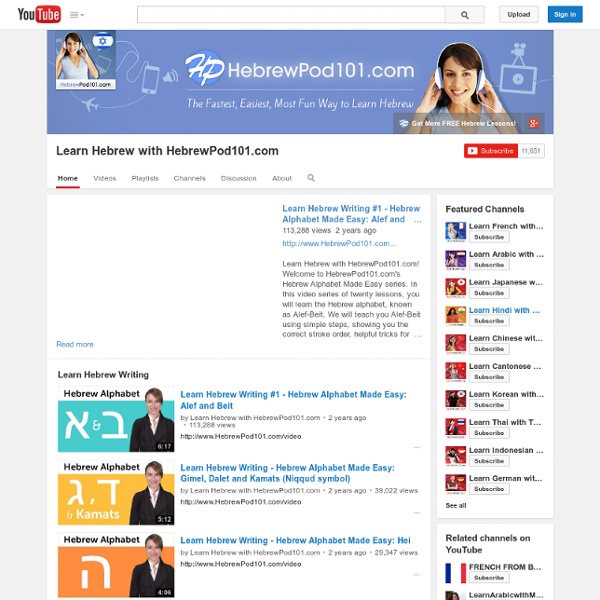 Learn Hebrew with HebrewPod101.com! Welcome to HebrewPod101.com's Hebrew Alphabet Made Easy series. In this video series of twenty lessons, you will learn the Hebrew alphabet, known as Alef-Beit. We will teach you Alef-Beit using simple steps, showing you the correct stroke order, helpful tricks for memorization, and proper usage in common Hebrew words. If you want to get started reading and writing Hebrew, this is THE place to start. You'll learn Hebrew in mere minutes with these audio and video lessons, so join us for Hebrew Alphabet Made Easy from HebrewPod101.com! In this lesson, we'll show you how to write two letters in Hebrew: alef, and beit, and we'll teach you a few words you can write with these letters. For more info, go to: Show less

The Letter Nun In the Talmud (Shabbat 115b, 116a) it is stated that any part of the Torah with 85 or more letters is itself considered a "book," and therefore, according to some of the Jewish sages, this passage of Scripture actually demarcates a separate book of the Torah! If so, instead of the five books of Moses, we would have seven: 1. Genesis2. Clep Exams - Free CLEP Study Guides at Free-Clep-Prep.com A few words about clep exams and the free clep study guides you'll find on this page: First of all, CLEP examinations are considered Lower Level credit in most colleges. For the majority of the 120-credit degree plans, 90 of those credits will be lower level, with the remaining 30 (Usually your senior year) being upper level credit. If you're in need of upper level credit, DANTES and ECE's are probably what you're looking for. If this is your first CLEP and you're still feeling nervous, I've put together a list of CLEPs rated by difficulty which you can find here - **Clep Difficulty List** Go ahead and pick one of the easier ones to start off with if it doesn't matter which exam you take.

The Letter Mem The letter Mem is the 13th letter of the Aleph-Bet, having the numeric value of 40. The pictograph for Mem looks like a wave of water, whereas the classical Hebrew script (Ketav Ashurit) is constructed of a Kaf with a Vav beside it: Note that the gematria for these components equals the value for the Divine Name. Ten of the greatest: Philosophical principles From John Stuart Mill's On Liberty, Aristotle's 'mean' philosophy to the principle of charity, here are the greatest principles of philosophy By JULIAN BAGGINI, Editor of The Philosopher's Magazine Updated: 21:00 GMT, 22 May 2010 by JOHN STUART MILL, 1806-1873 Whenever legislation is proposed that limits our freedoms, someone will reach for Mill's On Liberty and point to the passage that says, 'The sole end for which mankind are warranted, individually or collectively, in interfering with the liberty of action of any of their number, is self-protection.

The Letter Lamed The Uniqueness of LamedThe letter Lamed is unique in the Hebrew alphabet since it is the tallest letter (it is the only letter that rises above the baseline) and, as the 12th letter, it is considered the central letter (or "heart") of the Hebrew alphabet: Since Lamed towers over the other letters from its central position, it is said to represent melekh hamelakhim, the King of Kings. This idea is supported by the idea that the preceding letter stands for kisei hakavod, "the throne of Glory," and the following letter stands for malkhut, "kingdom." The sages also point out that the three central letters can spell the word melekh, King. The Meaning of LamedThe original meaning of Lamed probably was "to prick, sting, incite, goad," as a shepherd might prod cattle to perform some action.

The Letter Kaf / Khaf The letter Kaf is the 11th letter of the Aleph-Bet, having the numeric value of 20. The pictograph for Kaf looks like a palm of a hand, whereas the classical Hebrew script is constructed of a bent line that appears somewhat like a crown on the head of a prostrating king. Kaf is the first of the “double letters” in Hebrew, having both a “medial” form and an ending form (sofit). The Mystery of KafIn Jewish Mysticism, the two letters of the word “kaf” are the initial letters of the two Hebrew words: koach (“potential”) and poel (“actual”), suggesting that Kaf enables the latent power of the spiritual (the potential) to be made actual in the physical: The literal meaning of Kaf is “palm” which is considered the location where potential of the Yod (hand) is actualized (interestingly, the gematria for the word Yod is the same for the letter Kaf).

Psychology 101 at AllPsych Online Introduction and Authorship Welcome to Psychology 101. Have a seat and make yourself comfortable, we are about to start class. Psych 101 is a general psychology text adapted to an online guided format.