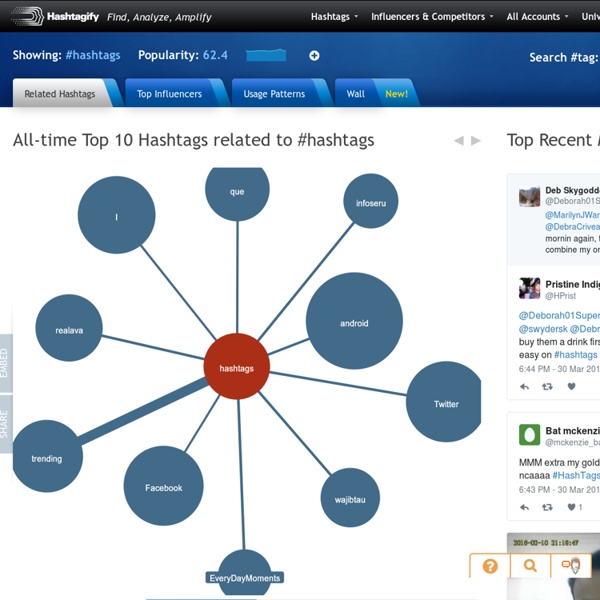 A good analysis of data is fundamental to devise, monitor and evaluate any social media strategy. Hashtag Intelligence is the most specialized service for analyzing Twitter hashtags. Don't miss a single tweet - without breaking a sweat Drill down into the influencers data directly on our website Export the raw data to analyze it further Create better reports with the top influencers' real tweets See Our Plans and Pricing Risk-Free 14-day trial. Cancel anytime.

99 Resources To Research & Mine The Invisible Web College researchers often need more than Google and Wikipedia to get the job done. To find what you're looking for, it may be necessary to tap into the invisible web, the sites that don't get indexed by broad search engines. The following resources were designed to help you do just that, offering specialized search engines, directories, and more places to find the complex and obscure. Search Engines Whether you're looking for specific science research or business data, these search engines will point you in the right direction. Google Obtains IBM Technology for Assessing Social Users' Interests Among a handful of patents transferred last December 31 from IBM's portfolio to that of Google, as first discovered by Bill Slawski of SEO By the Sea, is a system for processing text compiled by users of social networks, and ascertaining their common interests. We've already seen the rise of tools such as Radian6 for ascertaining social net users' individual interests; this new technology, which received a U.S. patent only one year ago, would judge what concepts they share with one another. The goal of this technology, as IBM originally stated, is to literally to filter out irrelevant links to articles that may not pertain to users' search intentions. What we don't know yet is whether Google intends to use this technology, or simply keep others from using it first.

You’ve seen them before, even if you didn’t know what you were seeing: #hashtags have become much of a trend on the Internet within the past few years. Starting on the social networking website Twitter, other social media sites have picked up on using them as well.These include the hot social media sites such as Pinterest and Instagram. While the use of the hashtags is used by Twitter users from all over the world to talk about a wide range of topics, you can even use it to help your business and increase exposure. If you are not familiar with the hashtag, it is actually used on Twitter as a representation of specific topics that people are talking about on Twitter in their Tweets. The tweets are short messages that Twitter users can type in throughout the day, talking about anything and everything that they want to. For example, if you were tweeting about a recent news event, you might tweet something like this:

Journey Into The Hidden Web: A Guide For New Researchers Table Of Contents 1. What is the Deep Web? In a networked world, why is the geography of knowledge still uneven? Children in an internet shop in Jakarta. The distribution of online knowledge is heavily weighted towards the global north. Photograph: Romeo Gacad/AFP/Getty Images Digital information – photographs, blogs, videos, tweets, Wikipedia articles, reviews, descriptions, stories, and myriad other types of content – surrounds us. Batch reverse geocoding This page will let you convert a large number of latitude/longitude pairs to their approximate address. Paste them into the left box (in the form Latitude,Longitude separated by either tabs or commas followed by new lines) and hit the 'Reverse geocode' button. Then go and make a cup of tea and when you return the box below should have the approximate addresses. Selecting Address components below will split the address into its parts (street name, postcode etc). Copy the output into a CSV file for easier manipulation.

Companies in Social Media Analysis A global reference to the hundreds of companies that offer products and services for listening to what people are saying in social media Navigating the directory The search box (above and at the top right of every entry) is your friend; the directory contains 508 listings. If you prefer to browse the company listings, visit the complete list. Tip: Search operates on the full text of company listings.

8 Tips To Building Quality Twitter Followers Ok, so you're on Twitter. But you're not Lady Gaga. Let's say you have a business as mundane as making signs. How do you build your following? Building a following is critical to marketing success not only because your customers are spending more of time on social sites than search engines but also because a strong following gives you a new channel of constant communication to a group of opted-in influencers.