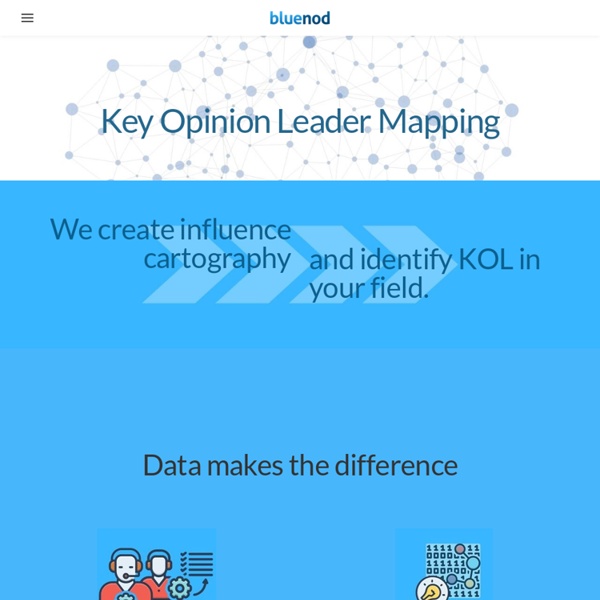 Interactive: Mapping the World's Friendships Technology bridges distance and borders. Individuals today can keep in touch with their friends and family in completely new ways — regardless of where they live. We explored these international connections through Facebook and found some trends — some predictable, some wholly unexpected, and some still inexplicable. Who can explain the strong link between the Democratic Republic of Congo, one of the poorest countries in the heart of Africa, and Ecuador? The reason the Central African Republic might be good friends with Kazakhstan is likewise mysterious to us. But as we did a little research, some unusual connections become surprisingly clear. Denise Searle: Blogging or flogging? Why NGOs face challenges in embracing the Internet’s potential [The Internet opens up new means of communications for major NGOs. But does it also make their position vulnerable to a new breed of web-native upstarts, who understand the power of technology more fully? Denise Searle, who has worked with some of the world's best known NGOs, explores that in this, the final part of our series on NGOs and the news. —Josh] At the offices of the Daily and Sunday Telegraph in London during December 2008, the customary Christmas and New Year parties were supplemented by a round of often tearful farewell drinks as staff at the respected broadsheet newspapers reeled from the third round of redundancies in two years.

Mohiomap - Visualize Evernote and Dropbox Mohiomap lets you search across several Cloud platforms at once, rendering the results as a dynamic Mind Map. Connect your Box, Twitter Search, Monitoring, & Analytics With iOS 9, Search lets you look for content from the web, your contacts, apps, nearby places, and more. Powered by Siri, Search offers suggestions and updates results as you type. There are two ways to use Search on your iOS device. Quick Search RelFinder - Visual Data Web Are you interested in how things are related with each other? The RelFinder helps to get an overview: It extracts and visualizes relationships between given objects in RDF data and makes these relationships interactively explorable. Highlighting and filtering features support visual analysis both on a global and detailed level. The RelFinder is based on the open source framework Adobe Flex, easy-to-use and works with any RDF dataset that provides standardized SPARQL access. Check out the following links for some examples: The RelFinder can easily be configured to work with different RDF datasets.

How to value big data ? Methodological issues and a glance at the future « Martin Pasquier Everyone has data, and we’re many to talk about them. But how can we monetize, or at least value social media data ? Here’s a few ideas given by companies as well as researchers during a brilliant conference hosted in Paris by the Social Media Club. On the panel : Franck Rebillard (a Professor at Université Paris III, working on IPRI project that I suggest to follow), Adrien Schmidt (CEO and founder at Squid Solutions), Sébastien Lefebvre (co-founder at Mesagraph) and Valérie Peugeot (Future Studies Project Manager at Orange Labs). Data needs a context One big issue with data is its context.

Navicrawler UPDATE: There now a portable version of Firefox with Navicrawler included: More information on these: These folders are zipped. Unzip and run “Firefox Portable”. You might have some obvious messages, and after that you have a fully functionnal Firefox 3.6 with Navicrawler installed.These are portable apps, it means that they do not interfere with other versions of Firefox that you might have. Hashtagify - Recherche # - Influenceurs - # relatifs mur tous MS Last 2 months: 1 Week Trend 1 Month Trend Comparison Controls

Chicago Lobbyists Force-Directed Graph Visualization Created by Christopher Manning Summary This visualization includes the 50 highest paid lobbyists in Chicago, their clients, and the agencies they lobby. The data was compiled from ChicagoLobbyists.org in 2010. Blue Nodes: LobbyistsGrey Nodes: ClientsGreen Nodes: Agencies The radius of the Blue(Lobbyist) and Grey(Client) nodes is relative to the amount of money associated with them. 10 Ways to Create Social Media Content That Succeeds Working in social media is a blast but what's even more exciting is sharing my passion for content marketing. At Dreamforce 2012, Dave Thomas and I teamed up at the Advanced Content Strategies session to share these 10 ways to create successful content. They succeed, you succeed, right? Tell a customer story in a way that makes them look like they saved the day, came up with a solution, and reaped the reward.

NameBase NameBase is a web-based cross-indexed database of names that focuses on individuals involved in the international intelligence community, U.S. foreign policy, crime, and business. The focus is on the post-World War II era and on left of center, conspiracy theory, and espionage activities.[1] In the 1980s, through his company Micro Associates, he sold subscriptions to this computerized database, under its original name, Public Information Research, Inc (PIR). At PIR's onset, Brandt was President of the newly formed non-profit corporation and investigative researcher, Peggy Adler, served as its Vice President. The material was described as "information on all sorts of spooks, military officials, political operators and other cloak-and-dagger types

21 Actionable Growth Hacking Tactics Update: Interested in even more Growth Hacking tactics? Buy my book of 100 practical growth hacking tactics! In this deck you will find 21 different areas of startup marketing where you can employ growth hacking tactics. Little tricks of automation or hackery that help you squeeze more out of your customer / user acquisition strategy. It's an extension of a previous deck I created, with a bunch of new content and has been well received at startup events I've presented it at. I enjoy presentations with lots of actionable content so that's all this is.