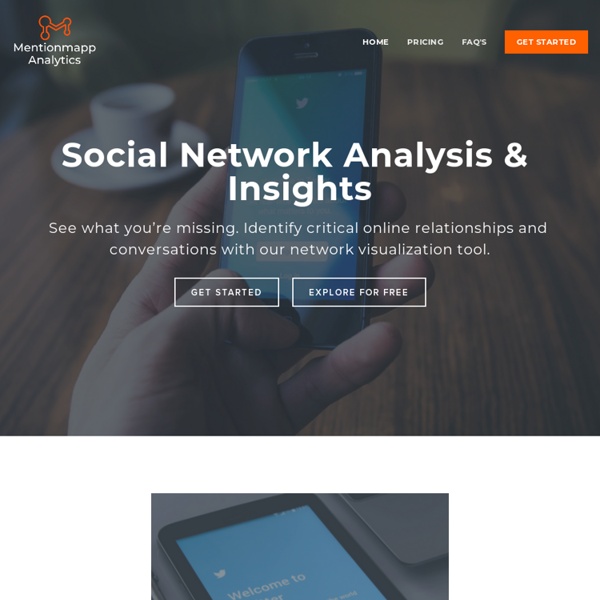 10 Killer Twitter Tools To Get You Advantage Over Others Getting hooked on Twitter isn’t that easy. Yet, once you have seen what value the Social Network can deliver, sticking with it and exploring it further becomes very powerful. Personally, I am using Twitter daily to stay in touch with a wide range of people and for building a network around the topics that interest me. I also found it to be a great amplifier of my thoughts.

MindMapping: Mind Maps, PDF Management and Reference Management Are you using mind mapping tools such as MindManager, FreeMind or XMind? And reference management tools such as JabRef, Endnote, or Zotero? And do you sometimes even create bookmark in PDFs? Internet Future Driven by User Reputation Scores by Hutch Carpenter In a recent interview with EMC's Stu Miniman about the future of the web, I predicted that in 20 years, we'll all have online reputation scores. Little badges, numbers that communicate our level of authority, this sort of thing.

The Twitterverse by Brian Solis and JESS3 - oneforty A 2010 Edison research study showed that 42% of respondents hear about products and services through Twitter. In response to this dynamic businesses are increasingly using Twitter to engage with customers, reach the media directly, and further establish themselves as thought leaders in their industry. You can even use Twitter for lead management or marketing automation. IRL Connect The first visual social network Broadcast your life Chat live with people around the world by location The 11 Twitter Tools and Apps I Use Every Day in 2011 The secret to success in utilizing Twitter for social media marketing in 2011 is in taking advantage of all of the 3rd party apps that exist for the platform. If you go to a Twitter application directory site you will literally find hundreds if not thousands of these apps available for you to use for free. The problem in 2011 is that many of these applications are old or just plain old don’t work as advertised. I’ve already blogged about the most popular Twitter applications that exist according to their Alexa rank, and some of the apps on this list I have already mentioned as well. But I wanted to give you a comprehensive look at the many different applications that exist in hopes that it may help you discover some new apps that you can use or maybe you can add to the comments by providing details on an app that you feel is superior than to what I recommend. 1.

5 Best Data Visualization Projects of the Year – 2009 It was a huge year for data. There's no denying it. Data is about to explode. Applications sprung up left and right that help you understand your data - your Web traffic, your finances, and your life. There are now online marketplaces that sell data as files or via API. 10 Awesome Free Tools To Make Infographics Advertisement Who can resist a colourful, thoughtful venn diagram anyway? In terms of blogging success, infographics are far more likely to be shared than your average blog post. This means more eyeballs on your important information, more people rallying for your cause, more backlinks and more visits to your blog. In short, a quality infographic done well could be what your blog needs right now.

Twitter Unfollower Tracker Free to Join For users with up to 25k friends/followers, Who Unfollowed Me provides a limited functionality 'Lite' version. There is a paid 'Pro' version that has more features and can accommodate users with up to 75k friends/followers. Check Unfollowers FP Twitterati 100 These days, everyone from the Dalai Lama to Bill Gates is on Twitter, the microblogging platform founded in 2006. During breaking news events like the death of Osama bin Laden or for following the Arab uprisings, it's become an invaluable tool for keeping up to speed. But for many, it's still just another place to promote their own work, rather than engaging in a more natural give-and-take. So how do you tell who's really worth following?