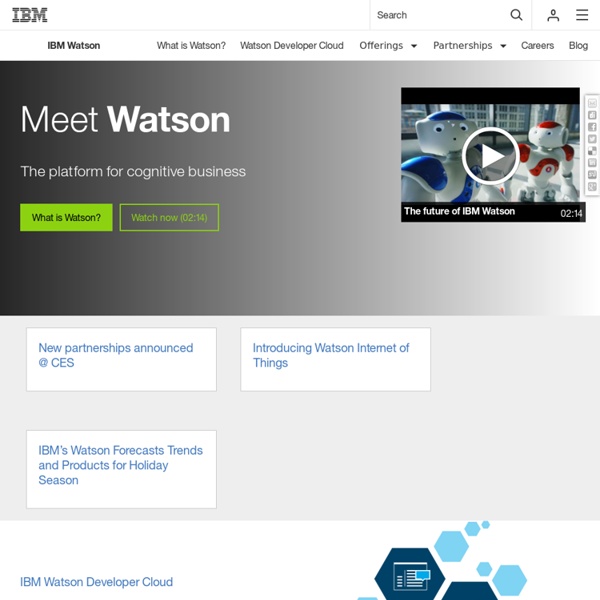 Artificial intelligence: two common misconceptions Recent comments by Elon Musk and Stephen Hawking, as well as a new book on machine superintelligence by Oxford professor Nick Bostrom, have the media buzzing with concerns that artificial intelligence (AI) might one day pose an existential threat to humanity. Should we be worried? Let’s start with expert opinion. The AI Revolution: Road to Superintelligence PDF: We made a fancy PDF of this post for printing and offline viewing. Buy it here. (Or see a preview.) Note: The reason this post took three weeks to finish is that as I dug into research on Artificial Intelligence, I could not believe what I was reading. It hit me pretty quickly that what’s happening in the world of AI is not just an important topic, but by far THE most important topic for our future.

Google+'s Best New Unadvertised Feature: Photo Search With Visual Recognition - Try It On Your Own Pictures And Be Amazed Unless you've been living under a rock, you are probably aware of the recent improvements and updates to the Google+ experience, both on the web and in mobile apps. While Auto Awesome, Auto Enhance, Auto Highlight, Auto Backup, and other widely discussed features are certainly exciting, one subtle nicety managed to fly under our radar until a post by Google's +Tor Norbye pointed out just how awesome it is. Visual Recognition The feature I'm talking about is visual recognition in Google+ photo search. Remember when +Vic Gundotra mentioned during the I/O 2013 keynote that Google+ will now attempt to guess what you're talking about and auto-tag posts based on, among other things, attached pictures? Turns out auto-tagging posts isn't the only way this visual analysis has surfaced, as there's now an option to Search photos under Photos in Google+ on the web and in the Android app:

Peering into the Future: AI and Robot brains In Singularity or Transhumanism: What Word Should We Use to Discuss the Future? on Slate, Zoltan Istvan writes: "The singularity people (many at Singularity University) don't like the term transhumanism. Transhumanists don't like posthumanism. Posthumanists don’t like cyborgism. And cyborgism advocates don't like the life extension tag. Stephen Hawking, Elon Musk, and Bill Gates Warn About Artificial Intelligence Hillary Clinton at the Iowa State Fair on August 15, 2015 in Des Moines, Iowa. (Photo by Win McNamee/Getty Images) The meme that now seems to be dominating much of the media coverage of the Democratic Primary is that pundits and experts are underestimating Bernie Sanders’s chances of winning the Democratic nomination for president. Currently, Mr. Sanders is receiving so much press for being underrated that he has become overrated.

Near-Living Crystal Three billion years after inanimate chemistry first became animate life, a newly synthesized laboratory compound is behaving in uncannily lifelike ways. The particles aren’t truly alive — but they’re not far off, either. Exposed to light and fed by chemicals, they form crystals that move, break apart and form again. Stanford to Research the effects of Artificial Intelligence What will intelligent machines mean for society and the economy in 30, 50 or even 100 years from now? That’s the question that Stanford University scientists are hoping to take on with a new project, the One Hundred Year Study on Artificial Intelligence (AI100). “If your goal is to create a process that looks ahead 30 to 50 to 70 years, it’s not altogether clear what artificial intelligence will mean, or how you would study it,” said Russ Altman, a professor of bioengineering and computer science at Stanford.

Digital version of piece of rat brain fires like the real thing The brain is going digital. A tiny piece of a rat’s brain has been reconstructed in minute detail in a computer. The digital piece of brain, which includes 31,000 neurons and their 37 million synapses, fires like the real thing, and is already revealing fresh clues as to how the brain works. The simulation is the first significant achievement of the Blue Brain project, which was launched 10 years ago by Henry Markram at the Swiss Federal Institute of Technology in Lausanne, Switzerland. Today’s breakthrough represents the first step to a larger goal – creating a digital model of the entire human brain to probe consciousness itself.

Captcha FAIL: Researchers Crack the Web's Most Popular Turing Test Captcha is the the gold standard for Turing tests on the web: Whenever an online form wants to check if you're a human being and not a spambot, it asks you to decipher one or two distorted words, presented as images. But what if there was a way for machines to defeat it? That's exactly what researchers at Vicarious AI say they've done.

This is an amazing technology innovation by philtian Dec 17