Age of Aritificial Intelligence: How We’re Already Living In a Sci-Fi Future. Augmented Reality: Top 100 Influencers and Brands. Augmented reality (AR) is a live direct or indirect view of a physical, real-world environment whose elements are augmented (or supplemented) by computer-generated sensory input such as sound, video, graphics or GPS data. 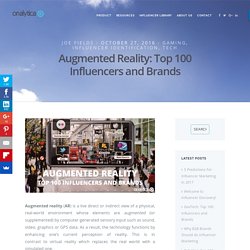 As a result, the technology functions by enhancing one’s current perception of reality. This is in contrast to virtual reality which replaces the real world with a simulated one. AR is in the early stages of an explosive growth cycle. The Pokemon Go phenomenon raised awareness and expectation for the vision of AR. Worldwide AR markets are poised to achieve significant growth with the use of smartphone apps and headsets or glasses to project digital information as images onto a game image or a work situation. Deep Learning Race: A Survey of Industry Players’ Strategies. This is Amazon's Biggest Contribution to Artificial Intelligence So Far - 1re... Amazon recently announced three major services that are aimed at making things easier for developers to exploit Artificial Intelligence (AI) capabilities. 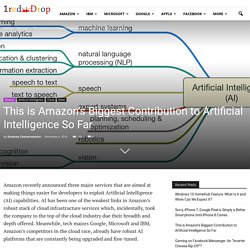 AI has been one of the weakest links in Amazon’s robust stack of cloud infrastructure services which, incidentally, took the company to the top of the cloud industry due their breadth and depth offered. Meanwhile, tech majors Google, Microsoft and IBM, Amazon’s competitors in the cloud race, already have robust AI platforms that are constantly being upgraded and fine-tuned. Google, for example, has been working on AI for a very long time, and even acquired DeepMind in 2014 to extend their capabilities in a big way. IBM’s strong push into the cloud segment is actually built around Watson, which goes much further and deeper than any of the traditional AI applications we have seen. Microsoft has been working on its own AI platform for many years – can anyone forget the meltdown their chatbot Tay had on Twitter? Amazon Lex Amazon Polly.

What the AI Behind AlphaGo Can Teach Us About Being Human. By Cade Metz 05.19.16 Aja Huang dips his hand into a wooden bowl of polished black stones and, without looking, thumbs one between his middle and index finger. 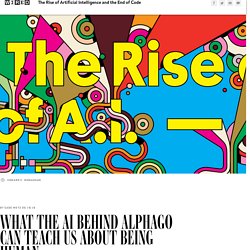 Peering through wire-rim glasses, he places the black stone on the board, in a mostly empty zone, just below and to the left of a single white stone. In Go parlance it is a “shoulder hit,” in from the side, far away from most of the game’s other action. Across the table, Lee Sedol, the best Go player of the past decade, freezes.

He looks at the 37 stones fanned out across the board, then stands up and leaves. In the commentary room, about 50 feet away, Michael Redmond is watching the game via closed-circuit. “I thought it was a mistake,” says the other English-language commentator, Chris Garlock, vice president of communications for the American Go Association. A few minutes later, Lee walks back into the match room. Forbes Welcome. Take the Poll: What Is AI’s Role in Your Organization? - CIO Journal. The use of artificial intelligence, which has been growing in fits and starts for years, is starting to play a much bigger role in business. 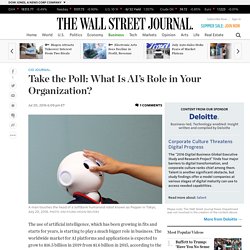 The worldwide market for AI platforms and applications is expected to grow to $16.5 billion in 2019 from $1.6 billion in 2015, according to the International Data Corp. Rob Thomas: A Practical Guide to Machine Learning: Understand, Differentiate, and Apply. Co-authored by Jean-Francois Puget (@JFPuget) Machine Learning represents the new frontier in analytics, and is the answer of how many companies can capitalize on the data opportunity. 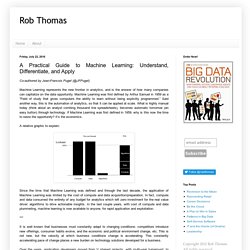 Toyota Invests $1 Billion in AI and Robots, Will Open R&D Lab in Silicon Valley. Today in Tokyo, Toyota announced that it is investing US $1 billion over the next five years to establish a new R&D arm headquartered in Silicon Valley and focused on artificial intelligence and robotics.

The Toyota Research Institute (TRI) plans to hire hundreds of engineers to staff a main facility in Palo Alto, Calif., near Stanford University, and a second facility located near MIT in Cambridge, Mass. Former DARPA program manager Dr. Gill Pratt, an executive technical advisor at Toyota, was named CEO of TRI, which will begin operations in January. Toyota president Akio Toyoda said in a press conference that the company pursues innovation and new technologies “to make life better for our customers and society as a whole,” adding that he wanted to “work with Gill not just because he’s an amazing researcher and engineer, but because I believe his goals and motivations are the same as ours.”

We spoke to Dr. TRI’s initial focus is AI for cars and robots, Dr. Dr. The ultimate guide to AI. What does artificial intelligence mean to you? 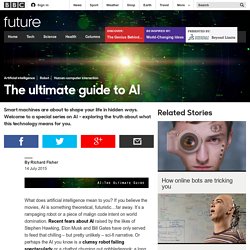