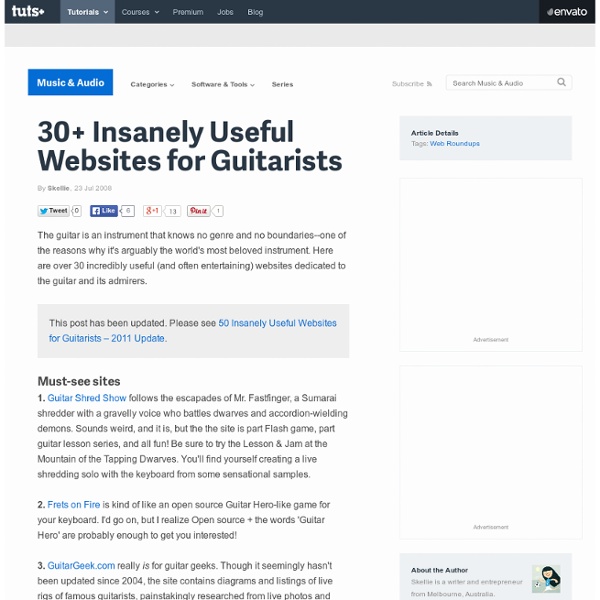 The guitar is an instrument that knows no genre and no boundaries--one of the reasons why it's arguably the world's most beloved instrument. Here are over 30 incredibly useful (and often entertaining) websites dedicated to the guitar and its admirers. Must-see sites 1. Guitar Shred Show follows the escapades of Mr. Fastfinger, a Sumarai shredder with a gravelly voice who battles dwarves and accordion-wielding demons. 2. 3. 4. 5. Soloing 6. 100 Greatest Guitar Solos is a ranked list of the greatest guitar solos of all time with included tablature for each. 7. 20 Greatest Guitar Solos Ever resembles the beginning of the above list, but with crispy and delicious YouTube videos for each entry. 8. Inspirational articles 9. 10. 99 Tips to Help You Play Better features 99 pearls of wisdom from guitar wizards like Steve Vai, Joe Satriani and Jimmi Page. “Your sound is in your hands as much as anything. 11. Free guitar tabs and guitar chords 12. 13. 14. 15. 17. Free guitar lessons 18. 19. 20. 21. 22.

Better Guitar - Guitar Songs You Should Learn. There are certain songs that every guitar player should try to learn. Either they are commonly requested or they have cool guitar parts that will expand your playing skills. I am going to list songs in several styles of music and explain why I think they should be add to your “play list.” While most are electric guitar songs, there are some acoustic songs also. 16 Legendary Fingerpicking Patterns For tabs see below. Fingerpicking style is a technique that is used in many famous and legendary songs over the years. The 16 examples in this post are a good source to learn the most common fingerpicking patterns you will ever come across.

How To Lead A Creative Life [Infographic] [Close Window] By Jason Feifer Our complete guide to making your inner genius your greatest on-the-job asset. Back to article >> Infographic by Pop Chart Lab G2.1Nu 2013 - TopTenREVIEWS The Zoom GN2.1Nu is small and sweet. You can expect some limitations because of the size – two footswitches don't allow for intricate effect changes in a live performance. Nevertheless, this guitar effect pedal comes with clever software, great community support and tons of effects. With 30 amp simulators, a drum machine and a great tone library (including several from master guitarist Steve Vai), this tenacious box is much bigger than its 6 pounds might suggest.

Learning and Loving Music Theory Kelvin, You actually caught a mistake on the roman numerals! Thanks, I’ll have to fix that. The first and last chords of the progression are not 7th chords. The 13 scariest pieces of classical music for Halloween Celebrate Halloween in macabre style with these bone-chilling masterpieces! Mussorgsky: Night on Bald Mountain The image of brooding, winged ghouls wreaking havoc on a mountain village under cover of night has terrified generations of young children in Walt Disney's Fantasia. Inspired by Russian legend, Mussorgsky's tone poem depicts the dark ritual of a witches' sabbath. Sadly, it was never performed in his lifetime, but the arrangement by his friend Rimsky-Korsakov has become a concert blockbuster.

How to read sheet music... a free course. The Mystery of Sheet Music To many people, reading sheet music is an intimidating, mysterious activity. But it doesn't need to be! It's actually quite simple, once you understand the secret behind it. At "ReadSheetMusic.info," my desire is to teach you how to read sheet music as quickly as possible.

I Will Destroy This Robot Sheet-Music Sight-Reader, I Swear I Will Sight-reading complex musical notation takes years of training, hundreds or thousands of hours of practice, sitting in front of the piano, a metronome drilling its infernal clicks into your brain. Eventually you'll gain the ability to read and perform just about any piece of music that's set in front of you, without ever having seen it before. It does not come easily, and it is not a natural skill; you have to keep practicing to retain it. Each month you don't practice takes two months to earn back the power you've squandered. Songwriting Exercises - Handout Songwriting Exercises by Joel Mabus Scaffolding Stuck? Here’s an old trick to get you going. The Aesthetics of Popular Music Popular music is widely assumed to be different in kind from the serious music or art music that, until very recently, monopolized attention in philosophical discussions of music. In recent years, however, popular music has become an important topic for philosophers pursuing either of two projects. First, popular music receives attention from philosophers who see it as a test case for prevailing philosophies of music.

Know Every Note on the Guitar in 9 Days Knowing every note on the guitar is a challenge unique to the instrument. A saxophone has only one way to finger each note, while a guitar usually has a few different strings and four fingers to choose from. String a few notes together and the permutations of how to play them will wreck your brain. Pianists have a similar problem with ten available digits, but you can memorize the notes on a keyboard in a matter of minutes; the same pattern of white and black keys repeats every octave. The challenge with navigating the guitar fretboard is its two-dimensional layout. Study Determines This Is the Most Relaxing Song Ever Looking for something to help you relax before bed that doesn't involve popping a pill? You might want to load up your iPod with a song by Manchester band Marconi Union. Sound therapists were able to rate ten of the most relaxing songs, with Marconi Union's 8 minute trance-inducing tune, "Weightless", coming out on top thanks to its continuous rhythm of 60 BPM, an ideal tempo for synchronization with the heart and brainwaves, making it an ideal audio accompaniment for a good night's rest. Listen to it after the jump… Lyz Cooper, founder of the British Academy of Sound Therapy notes: "While listening, your heart rate gradually comes to match that beat.

10 Essentials On Guitar Improvisation Photo by Simone13 AKA John Pastorello Besides writing and playing songs I just love improvising. When I practice improvising I always first pour myself a cup of green tea, I put on some folk music (e.g. Ray La Montagne, Damien Rice, Stephen Fretwell, Glen Hansard, Sheryl Crow, etc.) on Last.fm or Spotify.com and then I start to improvise over these songs. I get totally caught up in the moment and let my fingers carry me away. Other times I practice melodic patterns, triads, arpeggios, licks, everything that will spice up my improvisation skills.