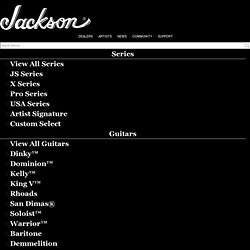 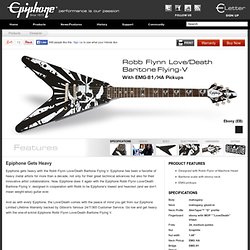 Robb has won countless awards including the Metal Hammer Golden Gods Award presented in 2007. And just like his music, Robb’s baritone design brings a totally original sound to metal and hard rock. “The main reason for having the slightly shorter 27.0” baritone scale is when you tune down to B, it just makes the low definition really tight, especially for palm muting and chunking,” remarks Flynn. Gibson Robot Les Paul Studio. Gibson 1957 Les Paul Custom 3 PU VOS. Gibson Holy Explorer. Gibson Rock and Roll Hall of Fame Les Paul. As the most celebrated electric guitar in rock, the Gibson Les Paul provides the perfect template to honor the history of the music itself. 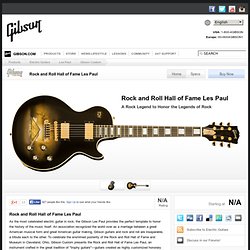 An association recognized the world over as a marriage between a great American musical form and great American guitar making, Gibson guitars and rock and roll are inseparable, a tribute each to the other. To celebrate the enshrined posterity of the Rock and Roll Hall of Fame and Museum in Cleveland, Ohio, Gibson Custom presents the Rock and Roll Hall of Fame Les Paul, an instrument crafted in the great tradition of "trophy guitars"—guitars created as highly customized honorary showpieces. According to Gibson tradition, such guitars are crafted in extremely limited numbers, and are usually snatched up by collectors the second they hit the market. Kramer SM-1 Seymour Duncan&trade; Body and Finish Mahogany is a legendary tonewood, beloved by players and luthiers alike for its excellent blend of depth, richness and clarity. 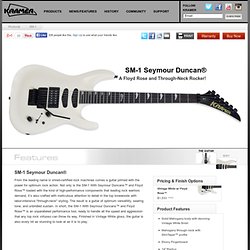 Gibson USA Anniversary Flood Les Paul Studio. The Nashville flood of May 2010 devastated not only the city in general but the music community in particular—and Gibson lies right at the heart of that community. 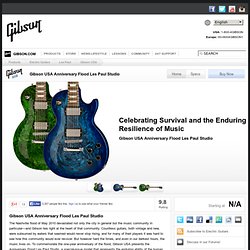 Countless guitars, both vintage and new, were subsumed by waters that seemed would never stop rising, and for many of their players it was hard to see how this community would ever recover. Epiphone Wildkat Royale. Kramer Assault 220 Plus EMG&reg; Gibson Explorer Tremolo. Gibson's Explorer was the most radical guitar the world have ever seen when it exploded on an unsuspecting public in 1958 as part of the new Modernist Series (alongside the Flying V). 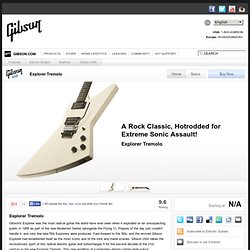 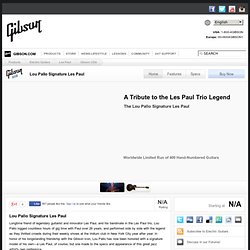 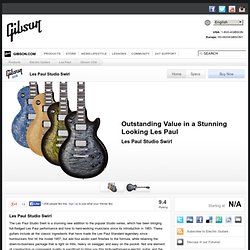 These guitars include all the classic ingredients that have made the Les Paul Standard legendary since humbuckers first hit the model 1957, but add four exotic swirl finishes to the formula, while retaining the down-to-business package that is light on frills, heavy on swagger, and easy on the pocket. Not one element of construction or component quality is sacrificed to bring you this high-performance electric guitar, and the Gibson USA Les Paul Studio Swirl might just be the most head-turning Studio model ever produced.

A handful of cosmetic simplifications help to bring this Les Paul in at a truly astounding price. Guitar: Gibson Firebird X. Gibson Les Paul Classic Plus. Utter the phrase “Les Paul Standard” and most players will bring a clear visual and sonic image instantly to mind. 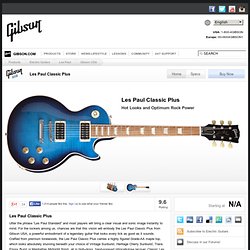 For the rockers among us, chances are that this vision will embody the Les Paul Classic Plus from Gibson USA, a powerful embodiment of a legendary guitar that looks every lick as good as it sounds. Crafted from premium tonewoods, the Les Paul Classic Plus carries a highly figured Grade-AA maple top, which looks absolutely stunning beneath your choice of Vintage Sunburst, Heritage Cherry Sunburst, Trans Ebony Burst or Manhattan Midnight finish, all in high-gloss, hand-sprayed nitrocellulose lacquer. Classic Les Paul Standard appointments such as acrylic trapezoid fingerboard inlays and cream body and neck binding are accompanied by a deceptively powerful pair of humbucking pickups mounted “open-coil” for a modified look that sits great with the guitar’s lack of pickguard, which also serves to show off the Les Paul Classic Plus’s gorgeous wood.

Gibson Moderne. A musical chimera, shrouded in the silvered mists of myth and legend, the Gibson Moderne has long been known as the enigmatic "guitar that never was"... or, was it? 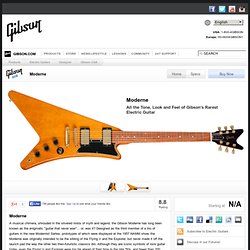 Designed as the third member of a trio of guitars in the new Modernist Series, prototypes of which were displayed at the 1957 NAMM show, the Moderne was originally intended to be the sibling of the Flying V and the Explorer, but never made it off the launch pad the way the other two then-futuristic classics did. Although they are iconic symbols of rock guitar today, even the Flying V and Explorer were too far ahead of their time in the late '50s, and fewer than 200 units of both types were made in their original three-year run before deletion from the catalog in 1960.

Perhaps Gibson foresaw that a third Modernist was pushing it just too far? Or did a poor early reaction to the guitar lead to its demise? Gibson Les Paul Studio. The Les Paul Studio has been a popular choice of hard-working guitarists everywhere ever since its introduction in 1983. Now, Gibson USA brings increased sonic versatility and performance upgrades to a new Les Paul Studio as part of its big 2013 Year of Les Paul celebrations.

The 2013 Les Paul Studio blends timeless tonewoods and components with improved comfort, powerful humbucking pickups with built-in coil-splitting switching for the added versatility of single-coil tones, and the classic looks that define it as a genuine Gibson Les Paul. To ram it all full speed into the 21st century, the 2013 Les Paul Studio is now also available with optional Min-ETune™ automated “robot” tuning, which can be added to your guitar with no internal modification for a nominal upcharge. Kramer Assault 220. High-octane shred axes traditionally tend toward the offset-double-cutaway body designs or updates on the classic V and Explorer shapes. However, plenty of players would love to put the timeless single cut style rock weapon through the high-speed, high-gain paces.

Enter Kramer’s Assault 220 and Assault 220FR. Both are designed with the classic Maple-Mahogany tonewood combination and single-cutaway styling, but updated with a sharper body horn, glued-in Mahogany neck, and a shred-certified 25-1/2” scale length. The Assault 220 are thinner and lighter than most single cutaways. These models are loaded with firepower with a pair of high-output Alnico V humbucker pickups with a push/pull tone control to series/parallel tap the neck pickup. Guitar: Electric, Acoustic and Bass Guitars, Baldwin Pianos. Epiphone Zakk Wylde Graveyard Disciple. There's no question that Zakk Wylde is a one-of-a-kind performer and guitarist. As a solo artist, former lead guitarist for Rock and Roll Hall of Famer Ozzy Osbourne, and leader of Black Label Society, Zakk has torched many a stage with his unique style and has inspired thousands of fans to learn to play guitar.

A winner of multiple "Most Valuable Guitarist" awards in the metal genre, Zakk combines pure speed shredding with the use of pinch harmonics and chickin' pickin' to create a wall of sound that's second-to-none. And like Zakk, our new limited edition Epiphone Graveyard Disciple will also set fire to any stage in its path. Scary Good Looks! You may have already caught a glimpse on YouTube of Zakk performing live on the classic "Peddle to the Metal" tour and seen Graveyard Disciple in action on stage. As with every Epiphone, the Graveyard Disciple featuress Epiphone's Limited Lifetime warranty backed by world famous 24/7/365 day Gibson Customer Service. Jim Root Telecaster® by Fender Electric Guitars.

You are welcome to praise or criticize the products you have purchased. However, please be specific in your comments as to why you like or dislike a product, so that it’s helpful to others in their decision-making process. While we try to post as much honest customer feedback as possible, customer reviews will normally be posted within 1-2 business days, though we reserve the right to reject publication, without notice, of any review due to content, language or other issues.

Kenny Wayne Shepherd Stratocaster® by Fender Electric Guitars. You are welcome to praise or criticize the products you have purchased. However, please be specific in your comments as to why you like or dislike a product, so that it’s helpful to others in their decision-making process. While we try to post as much honest customer feedback as possible, customer reviews will normally be posted within 1-2 business days, though we reserve the right to reject publication, without notice, of any review due to content, language or other issues.

Please refrain from including phone numbers, addresses or URLs. Please do not post promotional content such as advertisements of any kind (including "for sale" ads), links to your music page or music video, or repeated posts that make the same point excessively. We do not allow inappropriate language, profanity, obscenities or hate speech, including but not limited to racial, ethnic or religious slurs. If you have a suggestion for our site, please do not include it in your review.