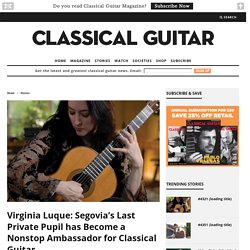 In the past year alone the Spanish native has released several first-rate CDs on her blossoming Iberia Productions label: the solo guitar Homage to Agustín Barrios; Spanish Masterworks for the Guitar (which includes the Concierto de Aranjuez, performed with the London Symphony Orchestra); A Christmas Feeling, consisting of instrumental duets with versatile jazz/blues guitarist Jack Pearson; and All Mozart, a disc of her conducting the Moravian Philharmonic Olomouc on the well-known Symphony No. 40 in G minor and Piano Concerto #21 in C major (featuring the Latin Grammy–winning Sonia Rubinsky).

“I’ve had a lot of projects in my mind all these years,” Luque says by phone from her Manhattan home (she also still spends much time in Spain). And she’s brimming with ideas. Portal:Classical guitar. From Wikipedia, the free encyclopedia Welcome to Wikipedia's portal for Classical guitar. 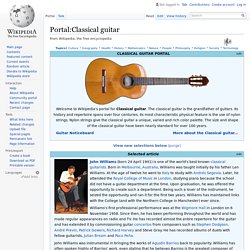 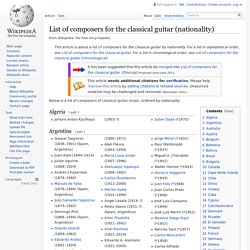 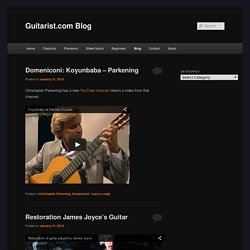 I’d spent two hours bringing the audience to this point — chatting them up, telling stories about the composers, mixing in a Classical Gas here and a Jobim number there. Everything was set for the knockout. The waiters had stopped serving, the cash register had stopped cha-chinging, and a full house of patrons had put down their forks and stopped talking to hear me finish burning through Leyenda. In those days, playing Leyenda, I used to picture a great wheel rolling across the Spanish countryside in darkness, with the landscape periodically lit by a flash of lightning when the big chords were struck.

So there I was, racing across Andalucia with the audience in the palm of my hand, when out of the corner of my eye I saw a sweet little old lady shuffling toward me. Now she was right in front of me. I gave up, smiled at her, and opened my hand to receive the offering. Welcome to guitar-comprehensive.com « Welcome to guitar-comprehensive. Category:Scores featuring the guitar. Classical guitar. John Williams: The Guitarist. Classical Guitar Tablature. Download GUITAR PDF Free Sheet Music. Classical Guitar — The online resource for classical guitarists.

Classical Guitar. Classical Guitar Composers List. The purpose of this list is to provide a succinct reference to composers who have composed at least one published original music for, or being transcribed for, solo classical guitar.

Each entry of the list consists of the composer's full name, year of birth, year of death (if applicable), and nationality. Alphabetizing is simply done by dropping all accents and diacritics. The list in its present form is by no means exhaustive. The list will be maintained and updated continuously. Your input is very welcome. Revision history: First release on July 17, 1996, 532 entries. The list is maintained by: Ying Sun Disclaimer: It is my interest to keep the content of this list accurate, current, and complete; however, I cannot guarantee any of the above.