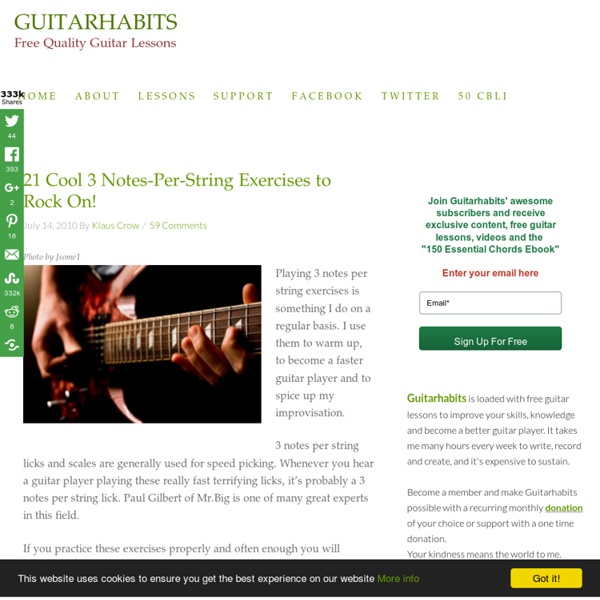 Photo by Jsome1 Playing 3 notes per string exercises is something I do on a regular basis. I use them to warm up, to become a faster guitar player and to spice up my improvisation. 3 notes per string licks and scales are generally used for speed picking. Whenever you hear a guitar player playing these really fast terrifying licks, it’s probably a 3 notes per string lick. Paul Gilbert of Mr.Big is one of many great experts in this field. If you practice these exercises properly and often enough you will increase your speed. The 3 notes per string exercises are played using the alternate picking technique. Once you get the hang of it, it can become quite addictive, but be careful though. The one and only reason why these monster guitar players become so incredibly fast is that they practice long hours for days, weeks, months and years.

Free VST Plugins! Are you looking for high quality VST plugins which you can download and use for free? You’re certainly in the right place! On this page, you’ll find the core part of BPB – a constantly updated directory of essential freeware VST instruments and effects for Windows and Mac (formerly known as BPB Freeware Studio). Welcome and enjoy your stay! Alternatively, you can browse through all the freeware tools (including freeware plugins, host applications, free audio editors, etc.) which have been featured in our News section so far, by visiting the Free Software Archive on BPB. The archive features all the software tools which were featured on BPB, ever since the launch back in 2009!

GuitarHabits.com Photo by Jimi Glide Working on increasing your picking speed is not just for the hell fire speed guru wannabe’s. Once your speed increases your whole style of playing loosens up. Your fingers will feel light and flexible and you’ll gain more freedom in your playing. Your fingers will float easily across the strings without trying so hard. It’s an important skill to work on and to maintain. The Chord Guide: Pt I – Chord Progressions Chord progressions are the canvas on which musicians paint their masterpieces, and it’s a canvas which is a piece of art in itself. A chord progression can be subtle and in the background or it can be blatant and up front; it can be simple and catchy, or it can be technical and complex, it can stay in one key or it can change like the seasons. In any of these cases a chord progression is what drives the song as it literally shapes the music that accompanies it.

Top 50 Youtube Guitar Channels The Top 50 Youtube Guitar Channels covers lessons, magazines, manufacturers, guitar stores, reviews, guitarists, and pretty much everything guitar centric. All of the channels below had reached at least 2 million total views by March of 2012. Our focus was on channels producing high quality guitar videos at regular intervals. 1. GuitarJamz.com #1 (martyzsongs) 155,460,210 views – guitar tabs 2. NextLevelGuitar.com (rockongoodpeople) 99,932,874 views – guitar lessons 3. Key Chords Key Chords app generates guitar chord progressions automatically. Use it free online, or get the app for Mac, Windows or iOS (iPad) - Click on a chord to preview how it sounds. - Drag and drop to arrange the chord progression - Tweak the settings to control the playback speed Or role the dice and Key Chords will automatically generate a nice sounding progression. Select a Key:

Thinking inside the Box: a complete EQ tutorial - dnbscene.com ContentsThis article was originally written and published on dnbscene.com in 2003. Part One: Intro To begin: an anecdote. I started making music with Impulse Tracker. After a few years of gaining decidedly unprofessional results with that, I moved onto Buzz. Yippee! Finding Solid Confidence on Stage Photo by Niklas Hellerstedt As is our confidence, so is our capacity. ~ William Hazlitt When I first started out playing on stage I was quite a shy person. Sometimes I could be totally the opposite but many times I was just a wreck because of a lack of confidence.

5 Beautiful Ways to Play a II-V-I Jazz Chord Progression Photo by Ava Weintraub I just love figuring out different ways to play a jazz chord progression or just mixing up jazz chords with other styles of music. It can add nice flavors to a song and give it some extra magic. It’s really fun to experiment with that. Learning jazz expands your guitar vocabulary to a whole new level if you are ready for it. In the meantime it’s just fun to play some beautiful jazz chord progressions and it will certainly contribute to your playing skills and creativity as well.

Know Every Note on the Guitar in 9 Days Knowing every note on the guitar is a challenge unique to the instrument. A saxophone has only one way to finger each note, while a guitar usually has a few different strings and four fingers to choose from. String a few notes together and the permutations of how to play them will wreck your brain. Pianists have a similar problem with ten available digits, but you can memorize the notes on a keyboard in a matter of minutes; the same pattern of white and black keys repeats every octave. SacredGeometryOfMusic The Sacred Geometry Of Music by Andrew Lorimer Music uses the laws of vibration to manifest aurally what exists at the center of everything. Into our reality springs a non-visual harmonic law that is universal. The notes and intervals of music speak directly to the chakra centers and causes them to vibrate in harmony to the vibration of a string or vocal chords, speakers moving through the air, or the sound of someone’s lips making a farting noise through a metal tube. Music uses the laws of physics and mathematics to bring out an emotional response in the listener. The music of the Western world uses a mathematical system based on Twelve.

6 Basic Major Scale Sequences / Melodic Patterns Photo by Gideon When I first learned to play sequences I didn’t know what all the fuzz was about. Why was it so important to learn all these “sequences” or as some prefer to call them “melodic patterns”? Anyhow, I did enjoy playing them because after a while I got into this flow and it sounded kinda cool. Once I really got the hang of it I came to learn the benefits of mastering sequences