1BlueString Campaign 10-Pack Strings (Acoustic): Musical Instruments. (Yiruma) River Flow in You - Sungha Jung. Know Every Note on the Guitar in 9 Days. Knowing every note on the guitar is a challenge unique to the instrument. 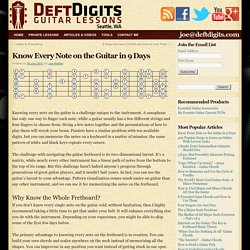 A saxophone has only one way to finger each note, while a guitar usually has a few different strings and four fingers to choose from. String a few notes together and the permutations of how to play them will wreck your brain. Pianists have a similar problem with ten available digits, but you can memorize the notes on a keyboard in a matter of minutes; the same pattern of white and black keys repeats every octave.

The challenge with navigating the guitar fretboard is its two-dimensional layout. It’s a matrix, while nearly every other instrument has a linear path of notes from the bottom to the top of its range. Why Know the Whole Fretboard? If you don’t know every single note on the guitar cold, without hesitation, then I highly recommend taking a little time to get that under your belt. The primary advantage to knowing every note on the fretboard is in creation. Day 1: Open Strings Day 3: First Three Frets Conclusion. Harmony Explained: Progress Towards A Scientific Theory of Music.

The Major Scale, The Standard Chord Dictionary, and The Difference of Feeling Between The Major and Minor Triads Explained from the First Principles of Physics and Computation; The Theory of Helmholtz Shown To Be Incomplete and The Theory of Terhardt and Some Others Considered Daniel Shawcross Wilkerson Begun 23 September 2006; this version 19 February 2012. 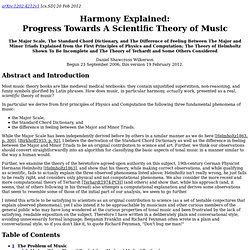 Abstract and Introduction Most music theory books are like medieval medical textbooks: they contain unjustified superstition, non-reasoning, and funny symbols glorified by Latin phrases. Harmonic Progressions. Kelvin, You actually caught a mistake on the roman numerals! 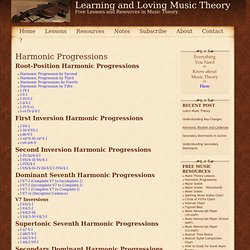 Thanks, I’ll have to fix that. The first and last chords of the progression are not 7th chords. Somehow I inadvertently typed “I7″ on the first chord of all the major keys. The Chord Guide: Pt III - Chord Progressions. Chord progressions are the canvas on which musicians paint their masterpieces, and it’s a canvas which is a piece of art in itself. 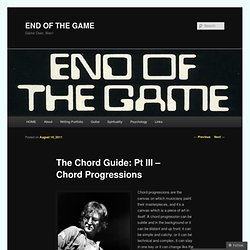 A chord progression can be subtle and in the background or it can be blatant and up front; it can be simple and catchy, or it can be technical and complex, it can stay in one key or it can change like the seasons. In any of these cases a chord progression is what drives the song as it literally shapes the music that accompanies it. Chord progressions are like a cozy home where melody and rhythm can kick their feet up. SpiderCapo Guitar Capo. 360 Worship: A great Webpage to help Guitar players learn the Fret-Board and Scales. Acoustic Guitar Lessons "Heart and Soul" Tab Included. Guitar Lesson - How to Memorize Note Names. Middle Eastern Maqams: Scales Lesson. Exotic Guitar Scales – Part 1. Tuesday, March 2, 2010, 17:37 86,289 views Exotic Guitar Scales are great for adding spice to your lead guitar playing. 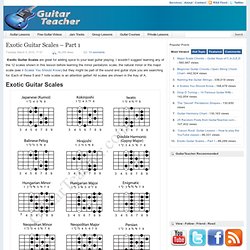 I wouldn’t suggest learning any of the 12 scales shown in this lesson before learning the minor pentatonic scale, the natural minor or the major scale (see 4 Scales You Should Know) but they might be part of the sound and guitar style you are searching for. Each of these 5 and 7 note scales is an attention getter! Freak Guitar - Scales. 21 Cool 3 Notes-Per-String Exercises to Rock On! Photo by Jsome1 Playing 3 notes per string exercises is something I do on a regular basis. 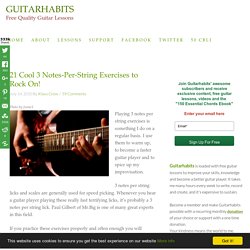 I use them to warm up, to become a faster guitar player and to spice up my improvisation. 3 notes per string licks and scales are generally used for speed picking. 16 Legendary Fingerpicking Patterns. For tabs see below. 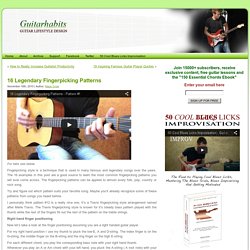 Fingerpicking style is a technique that is used in many famous and legendary songs over the years. The 16 examples in this post are a good source to learn the most common fingerpicking patterns you will ever come across. The fingerpicking patterns can be applied to almost every folk, pop, country or rock song. Try and figure out which pattern suits your favorite song. Maybe you’ll already recognize some of these patterns from songs you heard before. A B C D E F G Basic Major Scales to Improve Your Skills. Photo by Janek Mann The one thing most beginners hate to practice is scales, because they don’t see the point of it. 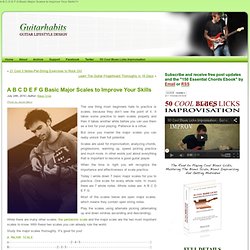 It takes some practice to learn scales properly and then it takes another while before you can use them as a tool for your playing. Patience is a virtue. But once you master the major scales you can really unlock their full potential. 10 Essentials On Guitar Improvisation. Photo by Simone13 AKA John Pastorello Besides writing and playing songs I just love improvising. When I practice improvising I always first pour myself a cup of green tea, I put on some folk music (e.g.

Ray La Montagne, Damien Rice, Stephen Fretwell, Glen Hansard, Sheryl Crow, etc.) on Last.fm or Spotify.com and then I start to improvise over these songs. I get totally caught up in the moment and let my fingers carry me away. Other times I practice melodic patterns, triads, arpeggios, licks, everything that will spice up my improvisation skills. The Guitar Resource Guide. A pre-guide note Edit. 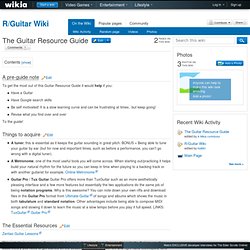 The Guitar Lesson.com. Guitar modes can be viewed as scales on their own, since the notes in each mode are separated by a given interval pattern. 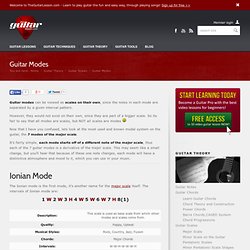 However, they would not exist on their own, since they are part of a bigger scale. So its fair to say that all modes are scales, but NOT all scales are modes Now that I have you confused, lets look at the most used and known modal system on the guitar, the 7 modes of the major scale. It’s fairly simple, each mode starts off of a different note of the major scale, thus each of the 7 guitar modes is a derivative of the major scale. This may seem like a small change, but you’ll hear that because of these one note changes, each mode will have a distinctive atmosphere and mood to it, which you can use in your music. Play The 7 Modes in 7 Days (Tabs Incl.)

Photo by Marta Monleón Modes are used in all kinds of musical styles like Jazz, Rock, Metal, Flamenco, etc. They create a certain mood or feel to your playing. If you feel like you are stuck playing solos using just Major/Minor or Pentatonic/Blues scales all the time, you’re ready to call on the modes and dive a little deeper. When I first got introduced to modes I was a little bit overwhelmed, but also excited to explore this whole new world of boundless possibilities. I soon realized it’s all about the journey and not the destination, so enjoy the process! There are 7 modes which can be derived from the major scale: 1 – Ionian 2 – Dorian 3 – Phrygian 4 – Lydian 5 – Mixolydian 6 – Aeolian 7 – Locrian. GUITAR THEORY: Mastering Your Scales & Modes. Viva la vida - Coldplay. Top 50 Youtube Guitar Channels.