Easy guitar songs for beginners with Tabs and video. Tuning_Sequence_Low.JPG (JPEG Image, 456 × 367 pixels) The 6 strings of a guitar. Most of us know this already, but some of you might still be unclear on exactly which string is which. 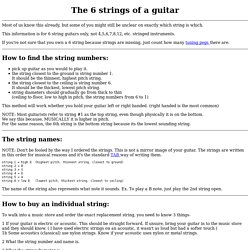 This information is for 6 string guitars only, not 4,5,6,7,8,12, etc. stringed instruments. If you're not sure that you own a 6 string because strings are missing, just count how many tuning pegs there are. How to find the string numbers: pick up guitar as you would to play it. the string closest to the ground is string number 1.It should be the thinnest, highest pitch string. the string closest to the ceiling is string number 6.It should be the thickest, lowest pitch string. string diameters should gradually go from thick to thin (ceiling to floor, low to high in pitch, the string numbers from 6 to 1) This method will work whether you hold your guitar left or right handed.

(right handed is the most common) NOTE: Most guitarists refer to string #1 as the top string, even though physically it is on the bottom. The string names: NOTE: Don't be fooled by the way I ordered the strings. How To String a Guitar. How to Change Your Acoustic Guitar Strings. How to Tune a Guitar: 9 Steps. Edit Article Edited by Sean Hickey, Tom Viren, Nathan Wong, Ben Rubenstein and 70 others. 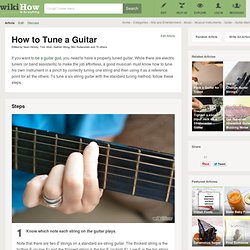 How to Hold a Guitar Pick - Fundamental Changes. Plectrums are quite tricky to get used to at first, and how to hold a guitar pick is one of the most common problems to correct with new students, especially adults who have been playing a while. 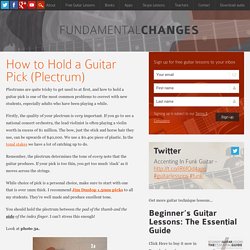 Firstly, the quality of your plectrum is very important. If you go to see a national concert orchestra, the lead violinist is often playing a violin worth in excess of $1 million. The bow, just the stick and horse hair they use, can be upwards of $40,000. We use a $0.40c piece of plastic. In the tonal stakes we have a lot of catching up to do. Remember, the plectrum determines the tone of every note that the guitar produces. While choice of pick is a personal choice, make sure to start with one that is over 1mm thick. You should hold the plectrum between the pad of the thumb and the side of the index finger.

Look at photo 3a. Notice that the pick balances nicely on the edge of my finger. Finally, we want to hold he plectrum at a slight angle so it glides through the strings when you strum. Famous Guitar Player Amp Settings. Amp settings for punk/rock music? Learn to Play the Guitar in 10 Hours – No Musical Talent Required. This post is for anyone who has thought about picking up the guitar but hasn’t yet. 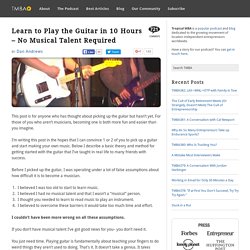 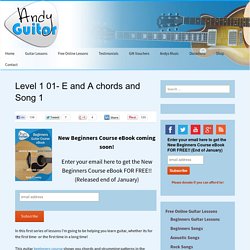 Enter your email here to get the New Beginners Course eBook FOR FREE!! (Released end of January) In this first series of lessons I’m going to be helping you learn guitar, whether its for the first time- or the first time in a long time! This guitar beginners course shows you chords and strumming patterns in the correct order and uses real songs as much as possible. This is lesson 1 of the course. Essential Beginner Guitar Chords: C major. All_chords.jpg (JPEG Image, 784 × 615 pixels) Chord+chart.gif (GIF Image, 1093 × 1440 pixels) - Scaled (69%) What key is my song in? Find the key of a song. Takes only minutes to learn!

sMRMfthAD8bu2lg93-0fKYHcDvFM6Cg0uSTtqKx_Opi9_S64fIPRyYOGuomcdZtd_jw=w300 (PNG Image, 300 × 300 pixels) How Guitar Scales are Formed. Beginners Scale FAQ. When I started on guitar, no one really explained to me why I should learn scales, and so I was convinced that they were some kind of torture device used by music school teachers to make kids hate music! 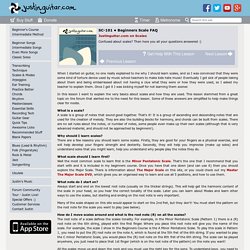 Eventually I got sick of people taking about them and being embarrassed about not having a clue what they were or how they were used, so I asked my teacher to explain them. Once I got it I was kicking myself for not learning them sooner. Free Beginners giuitar lessons. In this guitar lesson, we cover how to play Rock guitar power chords. 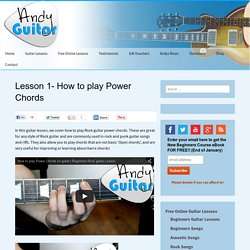 These are great for any style of Rock guitar and are commonly used in rock and punk guitar songs and riffs. Amazon.com: Customer Discussions: What are the 3 "punk" guitar chords? Guitar Chords. Bar Chords Made Easy ( Barre ) Learn The Guitar Fingerboard Thoroughly in 16 Days. Photo by John W. 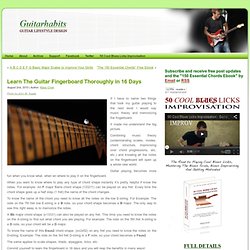 Tuggle If I have to name two things that took my guitar playing to the next level I would say music theory and memorizing the fingerboard. It made me understand the big picture. Combining music theory (understanding scales, modes, chord structure, improvising over chord progressions, etc, etc.) and knowing all the notes on the fingerboard will open up a whole new world. The FIRST SCALE you should learn on guitar. The CAGED SYSTEM explained. Guitar Scales - The 6 Most Common Guitar Scales. Forming Chords From Scales - Guitar Scales. Fretboard Theory, Learn Guitar Music Theory on the Fretboard. Learn Guitar Music Theory on the Fretboard The guitar fretboard is a grid. 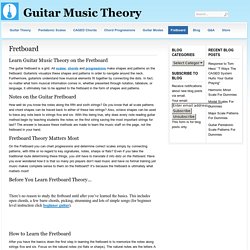 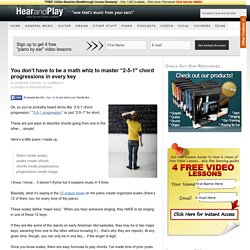 These are just ways to describe chords going from one to the other… simple! Here’s a little poem I made up. Notes create scales, scales create chords, chords create progressions, progressions create songs. I know, I know… it doesn’t rhyme but it explains music in 4 lines. Basically, what it’s saying is the 12 unique tones on the piano create organized scales (there’s 12 of them, too, for every tone of the piano). These scales define “major keys.” If they are like some of the rejects on early American Idol episodes, they may be in two major keys, wavering from one to the other without knowing it (…that’s why they are rejects). 10 Popular Guitar Chord Progressions. Must Know Guitar Chord Inversion Trick! Making Your Chords More Interesting.

4 Essential Guitar Chord Progressions for Beginners. When you first get started learning how to play the guitar, the idea of rushing into your favorite songs and riffs can be exciting. But beginning with the basics – like practicing chord progressions – can make a huge difference in your progress. Here, Pacifica, CA guitar teacher Matt B. shares a few exercises to try… How to Change Chords Quickly on Guitar using the 'Pressing Technique' - with Mark McKenzie.

Music Theory: Chord Progressions. The number of ways chords can go together to produce new and interesting sounds is nearly infinite. Musicians use their intuition and experience to arrange chords in ways that move the music along. This notion of movement is important to understanding how to compose and improvise a piece of music. Chord progressions are what gives a piece of music its harmonic movement. Harmonic Movement Usually the interplay between chords in a piece of music creates the feeling of movement and change. Some chord combinations sound uplifting, others sound somber, and some sound like ocean waves. Most pieces of music tend to first establish a feeling of stability, depart from it, create tension, then return to the feeling of stability. Key Chords. Key Chords app generates guitar chord progressions automatically. Use it free online, or get the app for Mac, Windows or iOS (iPad) - Click on a chord to preview how it sounds. - Drag and drop to arrange the chord progression - Tweak the settings to control the playback speed Or role the dice and Key Chords will automatically generate a nice sounding progression.

Select a Key: Select a key and choose a the major or minor scale. The resulting chord chart will display applicable chords for the selected key. 'Smoke on the water' on one string. Guitar lesson 2B : Beginner. 20th Century Boy by T Rex (How to play) Minor Pentatonic Song 4. How to play (Eric Clapton version) E Minor Pentatonic Song 1. A Horse With No Name by America - Easy Guitar Songs for Beginners. How many of you have seen (or heard of) those “infomercials” where some guy promises to teach you how to play the guitar in what? Twenty, thirty minutes tops? The First Songs You Should Learn on Guitar. Cat's In The Cradle by Harry Chapin - Easy Guitar Songs for Beginners. Tonality, or thinking of a song in terms of a key or tonal center, is an interesting thing. Sometimes you can play a chord and think, “This just doesn’t fit.” This is especially true if you rely on Internet tablature sites!

But sometimes it’s also a matter of preference. I can remember ordering the sheet music for today’s lesson, Harry Chapin’s “Cat’s in the Cradle,” from the music store by my high school shortly after Thanksgiving in 1974. Having just taken up the guitar less than five months before, I was a little dismayed to see that (a) it was in the key of F and (b) had a lot of chords I wasn’t ready to deal with quite yet, such as Ab and Eb.

I was also taking music theory that year in high school, so it wasn’t all that long before I had transposed this song into the key of E, using a capo on the first fret so I could play along with it whenever I put on the album. But it still wasn’t right to my ears. Anyway, thanks for letting me go on like that. How to Read Guitar Tabs. Beginner's Songbook Index. Beginners Songs. Guitar Tabs, Guitar Chords and Lyrics - Chordie. Game Tabs // Video Game Tablature. Ballad Of Serenity Fire Fly Theme Chords by Sonny Rhodes.