ACOUSTIC GUITAR SOUNDBOARDS. - DOUBLE TOPS are here - We are happy to announce that McKnight Guitars is now offering "Double Tops" as an option. 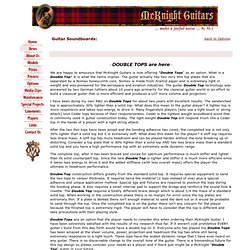 What is a Double Top? It is what the name implies. The guitar actually has two very thin top plates that are separated by a Nomex honeycomb core. Nomex is made from Aramid paper and is extremely light in weight and was pioneered for the aerospace and aviation industries. I have been doing my own R&D on Double Tops for about two years with excellent results. After the two thin tops have been joined and the bonding adhesive has cured, the completed top is not only 30% lighter than a solid top but it is extremely stiff. The complete top, after it has been braced and voiced for optimum performance is much stiffer and lighter than its solid counterpart top. Double Top construction differs greatly from the standard solid top. Double Tops are an option that the player needs to consider this when ordering their McKnight Guitar. More information on tops: 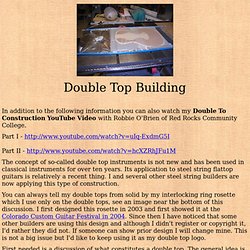 Part I - Part II - The concept of so-called double top instruments is not new and has been used in classical instruments for over ten years. Its application to steel string flattop guitars is relatively a recent thing. You can always tell my double tops from solid by my interlocking ring rosette which I use only on the double tops, see an image near the bottom of this discussion. Free plate tuning with Alan Carruth. Tap Tone of Music Woods. Parabolic Back Bracing. Luthier Tips du Jour - Murphy's Law. Luthier Tips du Jour - Classical Bridge Making - O'Brien Guitars. Building an Acoustic Guitar in your Kitchen. Routing the stepped channels around the perimeter of the body originally seemed like a pretty intimidating task.

Essentially, any slip of the router or major mistake here, and it would likely be fairly noticeable in the end. Using a Dremel and sharp rabbet bit, here's what the initial pass looked like up close: The next photo shows the "stepped" ledge needed to receive both the outer maple binding, and the inner black/white/black purfling strip: Because of a combination of the arched surface of the back, my less-than-amazing router base, and my equally less-than-amazing router skills, the depths of my cuts varied along the permiter of the guitar, and in some cases, the stepping effect disappeared completely.

To remedy this situation, I ordered a hand held Purfling Cutter from StewMac. Below is a photo of the maple binding and the b/w/b/ purfling strips taped in place, prior to glueing. Luthiercast. A Justly-Tuned Guitar. David Canright This article first appeared in 1/1, the Journal of the Just Intonation Network, Volume 2, Number 2, p.8 (1986). 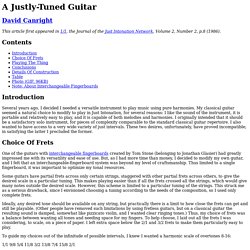 Contents Introduction Several years ago, I decided I needed a versatile instrument to play music using pure harmonies. My classical guitar seemed a natural choice to modify to play in Just Intonation, for several reasons: I like the sound of the instrument, it is portable and relatively easy to play, and it is capable of both melodies and harmonies. Choice Of Frets One of the guitars with interchangeable fingerboards created by Tom Stone (belonging to Jonathan Glasier) had greatly impressed me with its versatility and ease of use. Some guitars have partial frets across only certain strings, staggered with other partial frets across others, to give the desired scale in a particular tuning. Ideally, any desired tone should be available on any string, but practically there is a limit to how close the frets can get and still be playable. Howard Klepper: About my guitars. "Howard, that will surely end up in a famous musical instrument museum one day .... 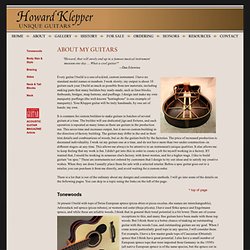 What a cool guitar! " ---Dan Erlewine Every guitar I build is a one-of-a-kind, custom instrument. I have no standard model names or numbers. It is common for custom builders to make guitars in batches of several guitars at a time. There is a lot that is out of the ordinary about my designs and construction methods. . ^ top of page Tonewoods At present I build with tops of Swiss European spruce (picea abies or picea excelsa--the names are interchangeable), Adirondack red spruce (picea rubens), or western red cedar (thuja plicata). While the top wood is much more important to the tone of a guitar than the wood used for the back and sides, these parts do make an audible difference. There is a tendency when people talk about guitar woods to refer to the tone of this or that wood, or of a particular wood combination. . ^ top of page Body size and style.