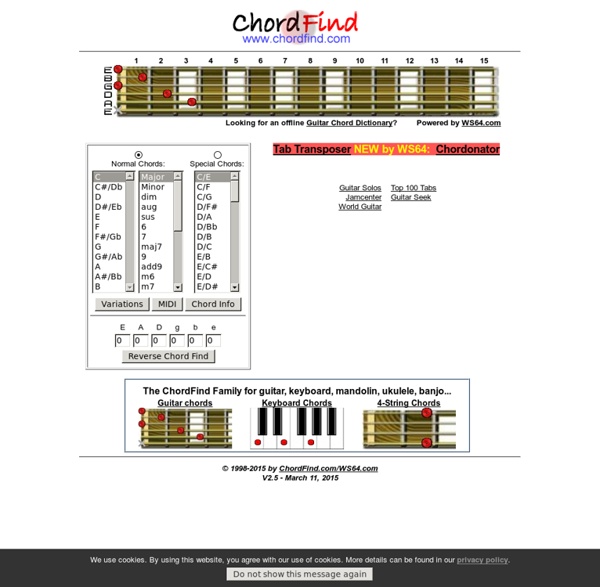 Key Chords Key Chords app generates guitar chord progressions automatically. Use it free online, or get the app for Mac, Windows or iOS (iPad) - Click on a chord to preview how it sounds. - Drag and drop to arrange the chord progression - Tweak the settings to control the playback speed Or role the dice and Key Chords will automatically generate a nice sounding progression. Select a Key: Chord Progressions GET THE GUITAR PROGRESSION CHORD CHARTS (sorry they’re too big for HTML so I put them in PDF) 420k but it’s worth the download!!!! There are so many chords and chord progressions, the combinations of them are virtually unending. So we’ll start with the old standby, the MAJOR SCALE and how it affects chord progressions. There are 7 notes in the major scale, each made up of different intervals.You can build chords on each of these notes.Some of them are minor chords, some of them are major chords, some of them are diminished chords. REMEMBER THAT CHORDS CAN BE SUBSTITUTED BY OTHER CHORDS IN THEIR FAMILY so the I, IV and V may be substituted for other major family chords

Intervals Objectives Learn all the intervals.Learn the fretboard patterns for the intervals.Learn both ways to play intervals. What Are Intervals? 12 Essential Blues Turnarounds by Andy Ellis Are your blues a little tired? Crave some fresh sounds? Chord progression - Wikipedia, the free encyclopedia IV-V-I progression in C Play Basics[edit] A chord may be built upon any note of a musical scale, therefore a seven-note scale allows seven basic chords, each degree of the scale becoming the root of its own chord.[4] A chord built upon the note A is an A chord of some type (major/minor/diminished, etc.) 10 interesting chords you've probably never used before Blog Published on September 28th, 2011 | by Caesar (ENGAGE) If you’re like me and likes experimenting with their music, You’re going to like this one! All of these chords are movable so why not give them a try and see how you can use them in your next song 1.

Free Guitar Chords & Chord Charts Free Guitar Chords and Guitar Chord Charts Home > Tools > Guitar Chords and Guitar Chord Charts Welcome to the JamPlay chord library. Here you will fund hundreds of thousands of voicings for every chord imaginable. We provide tablature as well as a guitar chord chart. If you are interested in standard tuning chord charts then simply select the chord family: If you are interested in alternate tunings then select the appropriate tuning: Top 50 Youtube Guitar Channels The Top 50 Youtube Guitar Channels covers lessons, magazines, manufacturers, guitar stores, reviews, guitarists, and pretty much everything guitar centric. All of the channels below had reached at least 2 million total views by March of 2012. Our focus was on channels producing high quality guitar videos at regular intervals. 1. GuitarJamz.com #1 (martyzsongs) 155,460,210 views – guitar tabs 2. NextLevelGuitar.com (rockongoodpeople) 99,932,874 views – guitar lessons 3.

Learning and Loving Music Theory - StumbleUpon Kelvin, You actually caught a mistake on the roman numerals! Thanks, I’ll have to fix that. Know Every Note on the Guitar in 9 Days Knowing every note on the guitar is a challenge unique to the instrument. A saxophone has only one way to finger each note, while a guitar usually has a few different strings and four fingers to choose from. String a few notes together and the permutations of how to play them will wreck your brain. Pianists have a similar problem with ten available digits, but you can memorize the notes on a keyboard in a matter of minutes; the same pattern of white and black keys repeats every octave.