The shocking truth about the crackdown on Occupy 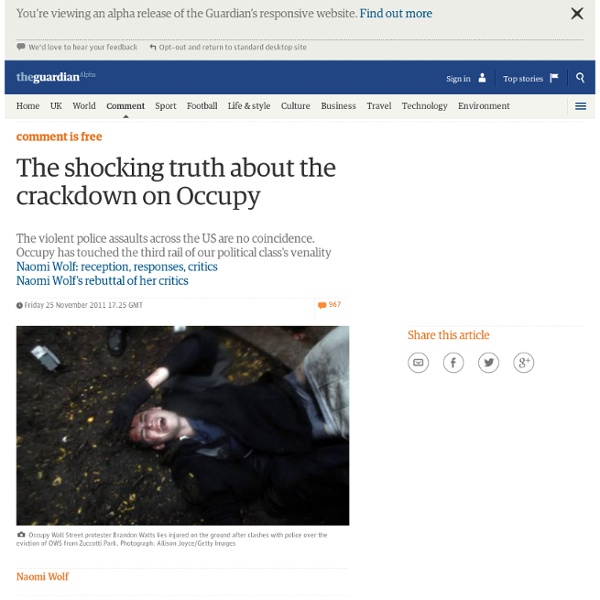 US citizens of all political persuasions are still reeling from images of unparallelled police brutality in a coordinated crackdown against peaceful OWS protesters in cities across the nation this past week. An elderly woman was pepper-sprayed in the face; the scene of unresisting, supine students at UC Davis being pepper-sprayed by phalanxes of riot police went viral online; images proliferated of young women – targeted seemingly for their gender – screaming, dragged by the hair by police in riot gear; and the pictures of a young man, stunned and bleeding profusely from the head, emerged in the record of the middle-of-the-night clearing of Zuccotti Park. But just when Americans thought we had the picture – was this crazy police and mayoral overkill, on a municipal level, in many different cities? – the picture darkened. To Europeans, the enormity of this breach may not be obvious at first. Why this massive mobilisation against these not-yet-fully-articulated, unarmed, inchoate people?

Felix Salmon misses the point on #Occupy and the global elite Felix Salmon is a respected and interesting Reuters blogger, and in a recent post entitled American Plutocracy he makes some good points which are exactly in line with what I write about in Treasure Islands. I hope he won’t mind my pasting quite a lot of his blog: Michael Lewis puts his finger on something important:“Ordinary Greeks seldom harass their rich, for the simple reason that they have no idea where to find them. Guantánamo Bay contractor on shortlist to run UK police services A US Pentagon contractor that was involved in building Guantánamo Bay is on a shortlist of private consortiums bidding for a £1.5bn contract to run key policing services in the West Midlands and Surrey. The Texas-based Kellogg Brown & Root, which was sold off by the controversial Halliburton corporation in 2007, is part of a consortium which has made it to the final shortlist for a contract that will see large-scale involvement of the private sector in British policing for the first time. When KBR was still part of Halliburton it won a large share of Pentagon contracts to build and manage US military bases in Iraq after the 2003 invasion.

» Senate Moves To Allow Military To Intern Americans Without Trial Alex Jones NDAA detention provision would turn America into a “battlefield” Paul Joseph Watson Infowars.com Monday, November 28, 2011 UPDATE: Yes, Americans Will Be Targeted As Terrorists Under the NDAA The Senate is set to vote on a bill today that would define the whole of the United States as a “battlefield” and allow the U.S. Military to arrest American citizens in their own back yard without charge or trial.

Did Mayors, DHS Coordinate Occupy Attacks? When a series of crackdowns on the Occupy camps suddenly occurred in, more or less, the same week, many observers wondered if perhaps the attacks had been coordinated at a national level. Oakland Mayor Jean Quan confirmed that suspicion during an appearance on the BBC - excerpted on The Takeaway radio program - when she casually mentioned taking part in a conference call with the leaders of 18 US cities right before the raids. “I was recently on a conference call with 18 cities across the country who had the same situation," said Quan. It turns out one of the 18 leaders who sat in on the call was Portland Mayor Sam Adams. The calls, according to Adams, were organized "to share information about the occupying encampments around the country." He described the calls to the New York Times as "check-ins to share information and advice on how various cities were handling the demonstrations."

Death by Advertising "Let me tell you the story of a man killed by advertising." So begins Émile Zola's satirical Death by Advertising, a short fiction story published in 1866 that describes the swift decline of Pierre Landry, a naïve believer in all claims of advertisers. What is remarkable about this story is not just that Zola had developed a compelling – and widely read – critique of advertising a hundred and forty years ago, but that within his imagined world we glimpse the beginnings of the mental environment movement. Pierre Landry is a caricature whose purpose is to show both the absurdity and the dangerous consequences of incessant advertising.

A May Day alert for the Occupy movement So, Occupy got it together for May Day – at least, in New York City. You would never know it, though, from mainstream news: those reports were full of what I call the "erectile dysfunction" narrative, the default narrative in American new coverage of mass protest. "Why Occupy May Day Fizzled", as CNN had it: flaccid efforts, always in "drenching rain", that may be well-intentioned but have no staying power. But if you click onto the new site Occupy.com – or if you actually went to the rally held in the late afternoon in Union Square – it was a very different story: thousands of euphoric protesters, a massive sound stage, edgy hip-hop artists who had created Occupy anthems that were euphorically received by the crowd, and representation by dozens of community groups and unions in Manhattan. In other words – if built on further – a power base.

2009 Obama calls for unconstitutional, indefinite Detention Centers; Will he veto NDAA (Video) Adam Helfer WASHINGTON, November 30th, 2011- In a move that was shocking to many, in March 2009, President Obama was calling for a bill that’s never been attempted in U.S. History and unsupported by the Constitution. At the National Archives (ironically standing in front of the original U.S. Ten Things You Should Know About Friday’s UC Davis Police Violence 1. The protest at which UC Davis police officers used pepper spray and batons against unresisting demonstrators was an entirely nonviolent one. None of the arrests at UC Davis in the current wave of activism have been for violent offenses. Indeed, as the New York Times reported this morning, the university’s administration has “reported no instances of violence by any protesters.” Not one.

David Graeber “The funny thing is,” my Egyptian friend told me, “you’ve been doing this so long, you kind of forget that you can win. All these years, we’ve been organizing marches, rallies … And if only 45 people show up, you’re depressed. If you get 300, you’re happy. Then one day, you get 500,000. And you’re incredulous: on some level, you’d given up thinking that could even happen.” Mubarak’s Egypt was one of the most repressive societies on Earth – the entire apparatus of state was effectively organized around ensuring that what ended up happening could never happen.

Wreedheden op Tahrir maar het volk geeft niet op – Cruelties on Tahrir but the people does not give up The police shoots with real bullets Solidarity while praying, Christians protecting Muslims at prayer Massacre and repression in Egypt: another January 28 Like this: Be the first to like this.