TRANSACTIONS ON THE INSTITUTE OF BRITISH GEOGRAPHERS 12/08/18 The post‐politics of plant biosecurity: The British Government's response to ash dieback in 2012. We [the British Government] need to be better prepared in understanding the risks of what pests and diseases are likely to arrive, when, where and how they might invade, how severe the impact is likely to be and what options are available for interception, eradication, mitigation or adaptation. 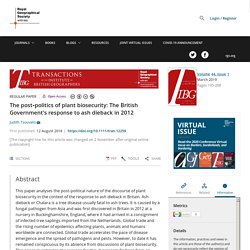 (Defra, 2013, p. 2) life's own capacity for ‘emergence’ … is being used to justify a continuous state of emergency: a situation seemingly more conducive to military decisiveness than political deliberation. (Clark, 2013, p. 19) In February 2012, plant biosecurity in Britain was breached when 600 ash saplings from the Netherlands infected with the fungal pathogen Hymenoscyphus fraxineus arrived at a nursery in Buckinghamshire, England. There, they were discovered during a routine check by a plant inspector from the Plant Health and Seeds Inspectorate of the Department for Environment, Food and Rural Affairs (Defra) (Baral et al., 2014; Heuch, 2014). 5.1 Methodological notes.

NFI (UK) 15/02/13 NFI survey of the incidence of Chalara fraxinea infection of ash (Fraxinus excelsior) in Great Britain. BBC 18/11/19 New hope for trees affected by ash dieback. Image copyright Science Photo Library Scientists say there is new hope in the fight against a disease that is devastating ash trees. 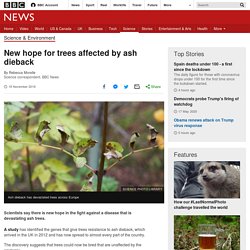 A study has identified the genes that give trees resistance to ash dieback, which arrived in the UK in 2012 and has now spread to almost every part of the country. The discovery suggests that trees could now be bred that are unaffected by the epidemic. The research is published in the journal Nature Ecology and Evolution. Prof Richard Buggs, from the Royal Botanic Gardens Kew, said: "I hope this work will lead to us safeguarding ash populations for future generations. 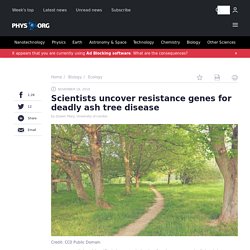 Researchers from Queen Mary University of London and the Royal Botanic Gardens, Kew sequenced the DNA from over 1,250 ash trees to find inherited genes associated with ash dieback resistance. The study, published in leading journal Nature Ecology & Evolution, showed that resistance is controlled by multiple genes, offering hope that surviving trees could be used to restore diseased woodlands, either by natural regeneration or selective breeding.

Professor Richard Nichols, author of the study from Queen Mary University of London, said: "We found that the genetics behind ash dieback resistance resembled other characteristics like human height, where the trait is controlled by many different genes working together, rather than one specific gene. " FORESTS 08/10/19 When the Bough Breaks: How Do Local Authorities in the UK Assess Risk and Prepare a Response to Ash Dieback? Ash dieback Hymenoscyphus fraxineus (T. 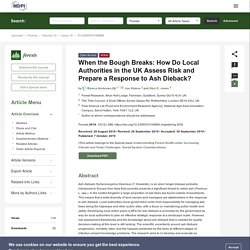 Kowalski), is an alien fungal disease probably introduced to Europe from Asia that currently presents a significant threat to native ash (Fraxinus L. spp.). In the United Kingdom a large proportion of ash trees are found outside of woodlands. This means that a wide diversity of land owners and managers are stakeholders in the response to ash dieback. Local authorities (local government units) hold responsibility for managing ash trees along the highways and other public sites, with a focus on maintaining public health and safety. Developing local action plans (LAPs) for ash dieback is promoted by the government as way for local authorities to plan an effective strategic response at a landscape scale. This is an open access article distributed under the Creative Commons Attribution License which permits unrestricted use, distribution, and reproduction in any medium, provided the original work is properly cited. 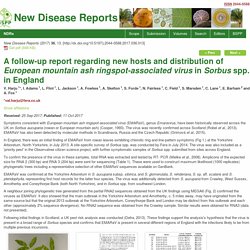 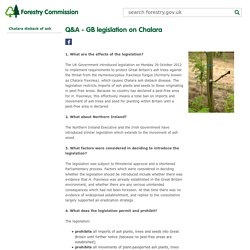 What are the effects of the legislation? FERA DEFRA 23/05/13 Pest Risk Analysis for Hymenoscyphus pseudoalbidus for the UK and the Republic of Ireland. Biological Invasions 01/04/17 Getting invasive species on the political agenda: agenda setting and policy formulation in the case of ash dieback in the UK. A great deal of the research on invasive species and plant pests is focused primarily on ecological and biological implications and actions (see, e.g., Pautasso et al. 2012; Kirisits et al. 2012; Hantula et al. 2014). 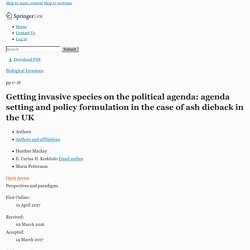 Any attempts to include a social science perspective are often limited to conducting a stakeholder survey or stakeholder communication exercises. This is not specific to the research on plant pests, but also applies to the natural sciences arena more generally, for instance within climate change debates (e.g., IPCC 2014). The broader systemic, legislative and political analytical role of social science tools and methodologies is often over-looked, resulting in prevention strategies being advocated in ignorance of many of the socio-political parameters that could have improved the chances of successful action/policy. Table 1 Summary of proposed measures to reduce the threat posed by common ash dieback to F. excelsior and its associated biodiversity. 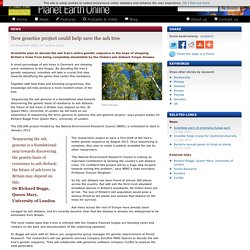 Ash canopy. A small percentage of ash trees in Denmark are showing some resistance to the fungus. By decoding the tree's genetic sequence, scientists will take a crucial first step towards identifying the genes that confer this resistance. Together with field trials and breeding programmes, this knowledge will help produce a more resilient strain of the tree. 'Sequencing the ash genome is a foundational step towards discovering the genetic basis of resistance to ash dieback: the future of ash trees in Britain may depend on this. The £50,000 project funded by the Natural Environment Research Council (NERC) is scheduled to start in January 2013. 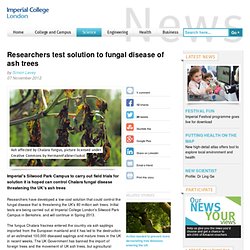 Initial tests are being carried out at Imperial College London's Silwood Park Campus in Berkshire, and will continue in Spring 2013. The fungus Chalara fraxinea entered the country via ash saplings imported from the European mainland and it has led to the destruction of an estimated 100,000 diseased saplings and mature trees in the UK in recent weeks. The UK Government has banned the import of foreign trees and the movement of UK ash trees, but agricultural experts warn this ban is too late because the disease is already established and spreading. Tim Mott, director of Natural Ecology Mitigation, said: "The product is formulated and patented and initial laboratory tests have been successfully completed. BBC 09/11/12 Owen Paterson: Ash dieback will not be eradicated. 9 November 2012Last updated at 10:01 ET By Mark Kinver and Matt McGrath BBC News Environment Secretary Owen Paterson: "The scientific advice is that it won't be possible to eradicate this disease" Environment Secretary Owen Paterson has acknowledged that ash dieback, a disease that threatens the UK's ash trees, will not be eradicated. 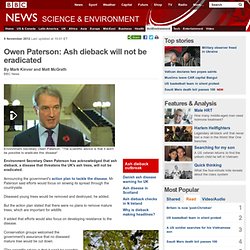 Announcing the government's action plan to tackle the disease, Mr Paterson said efforts would focus on slowing its spread through the countryside. Diseased young trees would be removed and destroyed, he added. But the action plan stated that there were no plans to remove mature trees, which are important for wildlife. It added that efforts would also focus on developing resistance to the disease. Mature ash trees will not be removed from the landscape, the government's action plan says Conservation groups welcomed the government's assurance that no diseased mature tree would be cut down. BBC 12/12/12 Ash dieback: Chalara fungus 'originated in Asia' 11 December 2012Last updated at 21:38 ET By Ania Lichtarowicz BBC Radio Science Unit. DAILYMAIL 10/11/12 Privet hedges linked to ash tree killer fungus which has infected over 80 million trees. By Valerie Elliott Published: 23:10 GMT, 10 November 2012 | Updated: 13:58 GMT, 11 November 2012 The privet hedge, a symbol of suburban Britain found in millions of private gardens, could be a secret killer of the nation’s 80 million ash trees.

Other favourite garden plants – such as lilac trees and the flowering shrub forsythia – could also be harbouring the ash dieback disease, a Government scientific adviser warned last night. Dr Steve Woodward, a forestry pathologist at Aberdeen University, has helped draw up the emergency plan to tackle the deadly fungus, known as Chalara fraxinea. Guilty: The privet hedge, a symbol of suburban Britain could be responsible for wiping out ash trees He confirmed that the popular common garden species could be spreading fungal spores that are devastating ashes.