FAS USDA 06/12/17 Agricultural Biotechnology Annual_London_United Kingdom_11-17-2017. THE SAINSBURY LABORATORY 23/04/17 Advice on an application for deliberate release of a GMO for research and development purposes. 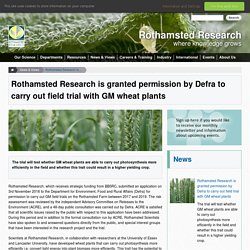 The risk assessment was reviewed by the independent Advisory Committee on Releases to the Environment (ACRE), and a 48-day public consultation was carried out by Defra. ACRE is satisfied that all scientific issues raised by the public with respect to this application have been addressed. During this period and in addition to the formal consultation run by ACRE, Rothamsted Scientists have also spoken to and answered questions directly from the public, and special interest groups that have been interested in the research project and the trial. Ensuring food security is a major challenge given the projected need to increase world food production by 40% in the next 20 years and 70% by 2050. 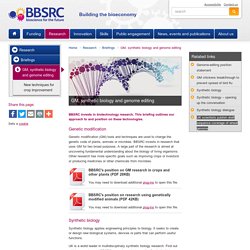 This briefing outlines our approach to and position on these technologies. Genetic modification Genetic modification (GM) tools and techniques are used to change the genetic code of plants, animals or microbes. BBSRC invests in research that uses GM for two broad purposes. A large part of the research is aimed at uncovering fundamental understanding about the biology of living organisms.

Genome editing Genome editing is a molecular biology technique that allows targeted mutations to be introduced into an organism’s DNA. ROTHAMSTED_AC_UK 07/07/15 The first GM oilseed crop to produce omega-3 fish oils in the field. In a landmark paper published today in the journal Metabolic Engineering Communications, scientists at Rothamsted Research have announced the first year results of the field-scale trial of Camelina oilseed plants genetically engineered to make omega-3 fish oils in their seeds. 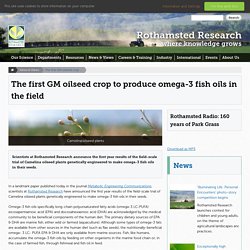 Omega-3 fish oils specifically long-chain polyunsaturated fatty acids (omega-3 LC-PUFA) eicosapentaenoic acid (EPA) and docosahexaenoic acid (DHA) are acknowledged by the medical community to be beneficial components of the human diet. The primary dietary sources of EPA & DHA are marine fish, either wild or farmed (aquaculture). Although some types of omega-3 fats are available from other sources in the human diet (such as flax seeds), the nutritionally-beneficial omega- 3 LC- PUFA EPA & DHA are only available from marine sources. Fish, like humans, accumulate the omega-3 fish oils by feeding on other organisms in the marine food chain or, in the case of farmed fish, through fishmeal and fish oil in feed. 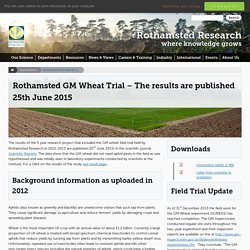 Thorough risk assessments of this field trial were carried out by the Rothamsted GM Safety Committee and no major safety concern were raised. Following this, the Government's ACRE (the Advisory Committee on Releases to the Environment) said it was "satisfied that all appropriate measures have been taken to avoid adverse effects to human health and the environment from the proposed release" in September 2011, which received coverage through local and national news channels.

ACRE is a statutory advisory committee appointed under section 124 of the Environmental Protection Act 1990 (the EPA) to provide advice to government regarding the release and marketing of genetically modified organisms (www.defra.gov.uk/acre/). As part of the ACRE process, there was a 60 day public consultation period 20th June to 19th Aug 2011, with input from organisations, e.g.

Can the genes move into surrounding areas? Might animals eat the seeds? What is the impact on natural aphid predators? ROTHAMSTED RESEARCH - Rothamsted Research submits application to Defra for permission to carry out field trial with GM Camelina plants. Rothamsted Research has submitted an application to the Department for Environment, Food and Rural Affairs (Defra) for permission to carry out a GM field trial on the Rothamsted Farm in 2016 and 2017. 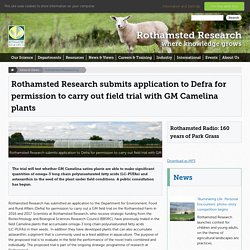 Scientists at Rothamsted Research, who receive strategic funding from the Biotechnology and Biological Sciences Research Council (BBSRC), have previously trialed in the field Camelina plants that accumulate omega-3 long chain polyunsaturated fatty acids (LC-PUFAs) in their seeds. In addition they have developed plants that can also accumulate astaxanthin, a pigment that is commonly used as a feed additive in aquaculture. The purpose of the proposed trial is to evaluate in the field the performance of the novel traits combined and individually. The proposed trial is part of the ongoing strategic programme of research at Rothamsted. Astaxanthin is a carotenoid pigment that has antioxidant properties and is used as a feed additive in fish farming. Further reading: Usher et al. 2015. GOV_UK 08/05/15 2010 to 2015 government policy: food and farming industry.

Issue The farming, food and drink sector is responsible for 3.5 million jobs and 7% of the UK’s overall economy. 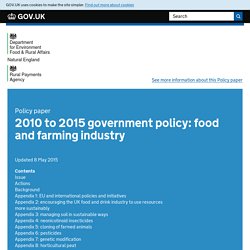 Making this sector more productive and competitive, particularly by increasing exports, will help economic growth. We need to produce more food, not just for economic growth but also to feed the growing world population. Animal and Plant Health Agency 10/05/16 GM Inspectorate annual report. THE ROYAL SOCIETY 22/02/03 A novel approach to the use of genetically modified herbicide tolerant crops for environmental benefit.

Etiquetage et OGM au Royaume-Uni. University of Florida - 2002 - Thèse en ligne : ANALYSIS OF US AND BRITISH MEDIA COVERAGE OF GENETICALLY MODIFIED FOOD 1993-2003. THE TELEGRAPH 05/08/14 First GM crops enriched with nutrients ready for harvest Genetically modified plants which contain health boosting Omega-3 have been created by British scientists and will be harvested with weeks. “It is only a small trial but it's a major step forward,” said Professor Jonathan Napier at Rothamsted Research in Hertfordshire where the crop has been growing for the past three months. 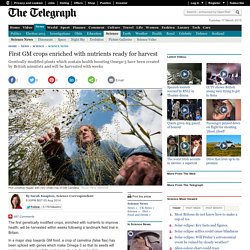 “Fish get fish oil from their diet when they swim in the sea but when you put them in a cage they can't do that and you have to feed them smaller fish, otherwise fish would have no more Omega-3 in them than chicken. “The problem is that there aren’t plenty of fish in the sea. One million tons of fish oil is removed from the seas every year and most of that goes into fish farming through fishmeal. It’s unsustainable. “So this would eventually be used to make farmed fish healthier. Omega-3 fatty acids have been widely linked to health benefits, such as lowering the risk of heart disease, cancers and neuro-degenerative diseases. 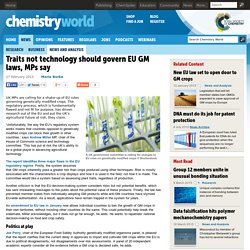 The regulatory process, which is fundamentally flawed and not fit for purpose, has driven research out of the EU and put the UK’s agricultural future at risk, they claim. ‘Unfortunately, the way the EU’s regulatory system works means that countries opposed to genetically modified crops can block their growth in other countries,’ says Andrew Miller MP, chair of the House of Commons science and technology committee.

‘This has put at risk the UK’s ability to be a global player in advancing agricultural technology.’ The report identifies three major flaws in the EU regulatory regime. Another criticism is that the EU decision-making system considers risks but not potential benefits, which has sent misleading messages to the public about the potential value of these products. Politics at play. ROTHAMSTED RESEARCH 15/04/14 Rothamsted Research is granted permission by Defra to carry out a field trial with GM Camelina plants. Rothamsted Research submitted an application in late January 2014 to the Department for Environment, Food and Rural Affairs for permission to carry out a GM field trial on the Rothamsted Farm in 2014, 2015, 2016 and 2017. 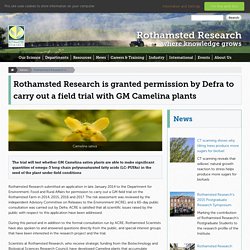 The risk assessment was reviewed by the independent Advisory Committee on Releases to the Environment (ACRE), and a 60-day public consultation was carried out by Defra. ACRE is satisfied that all scientific issues raised by the public with respect to this application have been addressed. During this period and in addition to the formal consultation run by ACRE, Rothamsted Scientists have also spoken to and answered questions directly from the public, and special interest groups that have been interested in the research project and the trial. 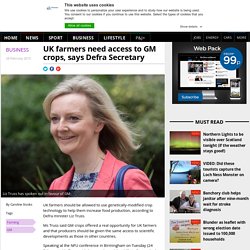 Ms Truss said GM crops offered a real opportunity for UK farmers and that producers should be given the same access to scientific developments as those in other countries. Speaking at the NFU conference in Birmingham on Tuesday (24 February), Ms Truss said she was pleased that MPs in Europe had agreed to allow member states to decide for themselves whether GM crops could be grown commercially. But she said she would like member states to have the freedom to make more choices over which technologies they could use. “Europe needs to embrace scientific advances and I am pleased the need for greater national discretion in GM has been accepted,” she told delegates. “The new agreement to have more discretion at a member state level, I would like that to go further.” LOC_GOV 27/02/15 Restrictions on Genetically Modified Organisms: England and Wales.

The growth and sale of genetically modified organisms (GMOs) are permitted in England and Wales, subject to an intensive authorization process that occurs primarily at the European Union (EU) level. Most legislation in England and Wales that applies to GMOs is implementing legislation for EU law. The general attitude in England is averse to genetically modified (GM) products; however, a slight shift in attitude towards GM products has recently been reported, and the UK government’s policy indicates a more receptive attitude towards these products. HSE_GOV_UK - 2014 - GMOs and the law.

The GMO(CU) Regulations provide a framework for making these judgments, and place clear legal obligations on people who work with GMOs. The GMO(CU) Regulations: require risk assessment of contained use involving GMMs and larger GMOs. CLA_ORG_UK - JUIN 2013 - FUTURE FARMING: CLA POLICY ON BIOTECHNOLOGY. BEYOND GM 05/01/15 UK government preparing the ground for GM crops. January 5, 2015 by Lawrence Woodward UK minsters are not expecting commercial planting of GMO crops in this country “for at least a few years” but will ease their way by ensuring that “pragmatic” regulations are put in place. RAPPORT OAV - United Kingdom 2014-7209 Genetically modified organisms Sep 2014. DEFRA - AVRIL 2011 - GM POLICY AND REGULATION EVIDENCE PLAN 2011/12.