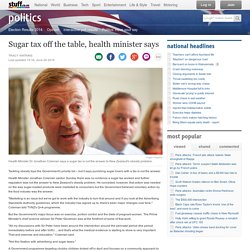 Tackling obesity tops the Government's priority list – but it says punishing sugar lovers with a tax is not the answer. Health Minister Jonathan Coleman saidon Sunday there was no evidence a sugar tax worked and further regulation was not the answer to New Zealand's obesity problem. He conceded, however, that action was needed on the way sugar-loaded products were marketed to consumers but the Government believed voluntary action by the food industry was the answer.

"Marketing is an issue but we've got to work with the industry to turn that around and if you look at the Advertising Standards Authority guidelines, which the industry has signed up to, there's been major changes over time," Coleman told TVNZ's Q+A programme. But the Government's major focus was on exercise, portion control and the diets of pregnant women. 20% tax on fizzy drinks could save the lives of about 67 Kiwis each year. A tax on fizzy drinks could save lives and generate millions in revenue for health programmes in New Zealand. 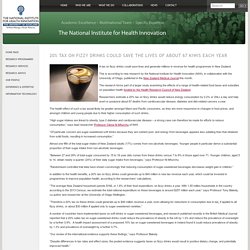 This is according to new research by the National Institute for Health Innovation (NIHI), in collaboration with the University of Otago, published in the New Zealand Medical Journal this month. Tax salty, fatty foods and 'save 2400 lives' Subsidy on fruit and vegetables also needed, say researchers. 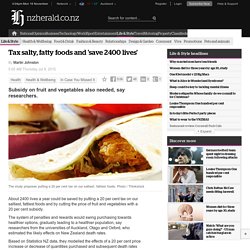 About 2400 lives a year could be saved by putting a 20 per cent tax on our saltiest, fattiest foods and by cutting the price of fruit and vegetables with a 20 per cent subsidy. The system of penalties and rewards would swing purchasing towards healthier options, gradually leading to a healthier population, say researchers from the universities of Auckland, Otago and Oxford, who estimated the likely effects on New Zealand death rates.

Based on Statistics NZ data, they modelled the effects of a 20 per cent price increase or decrease of quantities purchased and subsequent death rates from heart attack, stroke, diabetes and diet-related cancers. The biggest effect of an individual component - a 6.8 per cent reduction in overall mortality - was from a 20 per cent price bump in food groups that are important contributors to our salt intake. Poll finds majority support for 'fat tax' "Nanny state" interventions such as a "fat tax" on unhealthy products and compulsory nutrition ratings on food labels are popular with New Zealanders, a Herald-DigiPoll survey shows. 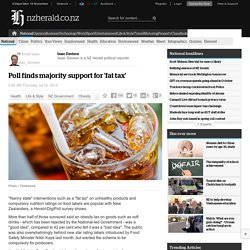 More than half of those surveyed said an obesity tax on goods such as soft drinks - which has been rejected by the National-led Government - was a "good idea", compared to 42 per cent who felt it was a "bad idea". The public was also overwhelmingly behind new star rating labels introduced by Food Safety Minister Nikki Kaye last month, but wanted the scheme to be compulsory for producers. Health Minister Tony Ryall said the poll result was "not surprising" considering the high profile the issue of obesity taxes has had in media coverage. He reaffirmed the Government's opposition to fat taxes or sugar taxes, saying they would raise the cost of a range of staple products such as jam. Ms Kaye said the Government had decided against making it mandatory because this would cause food prices to spike.

PM rejects 'fat tax' - politics - national. Last updated 12:35 16/04/2014 John Key is unconvinced of the merits of a "fat tax" on sugary drinks, predicting the price of Coca-Cola would have to go up "a lot" before it would affect sales. 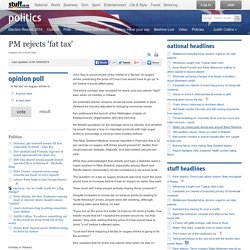 The prime minister also revealed he drank only low-calorie "light" beer when on holiday in Hawaii. He predicted similar versions would become available in New Zealand as industry adjusted to changing consumer needs. Key addressed the launch of the Wellington chapter of Entrepreneurs' Organisation (EO) this morning. He fielded questions on the damage done by obesity, and whether he would impose a levy on imported products with high sugar levels to encourage a move to more healthy options. 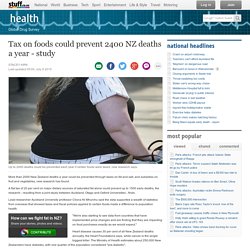 More than 2000 New Zealand deaths a year could be prevented through taxes on fat and salt, and subsidies on fruit and vegetables, new research has found. A flat tax of 20 per cent on major dietary sources of saturated fat alone could prevent up to 1500 early deaths, the research - resulting from a joint study between Auckland, Otago and Oxford Universities - finds. Lead researcher Auckland University professor Cliona Ni Mhurchu said the data supported a wealth of statistics from overseas that showed taxes and fiscal policies applied to certain foods made a difference to population health. How can we fight fat in NZ? Share your stories, photos and videos. "We're also starting to see data from countries that have implemented price changes and are finding that they are impacting on food purchases exactly as we would expect. "