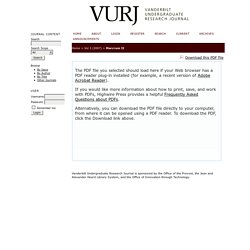 If you would like more information about how to print, save, and work with PDFs, Highwire Press provides a helpful Frequently Asked Questions about PDFs. Alternatively, you can download the PDF file directly to your computer, from where it can be opened using a PDF reader. To download the PDF, click the Download link above. Id.pdf. Multilingualism: Multiple Personalities or Just a Diverse One?

Governed by the needs of globalization, I believe it is fair to state that multilingualism is becoming a MUST in the increasingly multicultural business world. 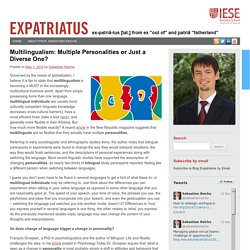 Apart from simply possessing more than one language, multilingual individuals are usually more culturally competent (linguistic knowledge decreases cross-cultural barriers), have a more efficient brain (take a look here), and generally more flexible in their thinking. But how much more flexible exactly? A recent article in the New Republic magazine suggests that multilinguals are so flexible that they actually have multiple personalities. Referring to early sociolinguistic and ethnographic studies done, the author notes that bilingual participants in experiments were found to change the way they would interpret situations, the way they would finish sentences, and the descriptions of personal experiences along with switching the language.

Change of Language, Change of Personality? Multilinguals Have Multiple Personalities. In an essay published on Monday, New Republic Senior Editor Noam Scheiber—who grew up speaking both Hebrew and English—explains why he stopped speaking only Hebrew to his three-year-old daughter. 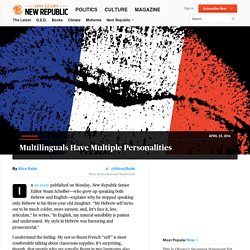 “My Hebrew self turns out to be much colder, more earnest, and, let’s face it, less articulate," he writes. "In English, my natural sensibility is patient and understated. My style in Hebrew was hectoring and prosecutorial.” I understand the feeling. My not-so-fluent French “self” is most comfortable talking about classroom supplies. Women in Love Summary. The novel opens with the sisters Ursula and Gudrun Brangwen chatting about marriage one morning at their father’s house in Beldover. 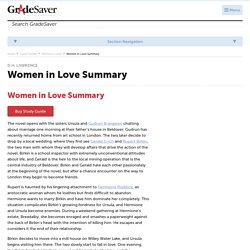 Gudrun has recently returned home from art school in London. The two later decide to drop by a local wedding, where they first see Gerald Crich and Rupert Birkin, the two men with whom they will develop affairs that drive the action of the novel. Birkin is a school inspector with extremely unconventional attitudes about life, and Gerald is the heir to the local mining operation that is the central industry of Beldover. Birkin and Gerald hate each other passionately at the beginning of the novel, but after a chance encounter on the way to London they begin to become friends. Rupert is haunted by his lingering attachment to Hermione Roddice, an aristocratic woman whom he loathes but finds difficult to abandon.

Birkin decides to move into a mill house on Willey Water Lake, and Ursula begins visiting him there. Sons and Lovers by D. H. Lawrence. T.S. Eliot Reads His Modernist Masterpieces "The Waste Land" and "The Love Song of J. Alfred Prufrock" Did you know T.S. 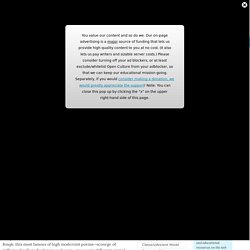 Eliot’s portentous and heavily allusive 1922 masterpiece “The Waste Land” was originally titled “He Do the Police in Different Voices,” a quote from Charles Dickens’ Our Mutual Friend? Filled with references to Dante’s Divine Comedy, Joseph Conrad’s Heart of Darkness, and James Frazier’s The Golden Bough, this most famous of high modernist poems—scourge of millions of college freshman each year—was a very different animal before notorious modernist impresario Ezra Pound got his hands on it. Pound’s heavy reworking is responsible for the poem you hear above, read by Eliot himself. The first image in the video shows Pound’s marginal annotations. In the video above listen to Eliot read his second-most famous work, “The Love Song of J.

You can find these poems catalogued in our collection of 700 Free Audio Books and 800 Free eBooks. Would you like to support the mission of Open Culture? Multilingualism: Johnson: Do different languages confer different personalities? J. J.L.Lemke On-line Office Language and Identity Development No one seems to doubt that language, both in its communicative functions, and in its systems of semantic classification, plays a major role in identity development. 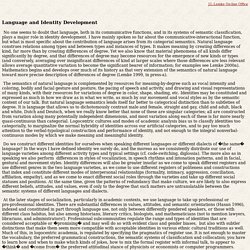 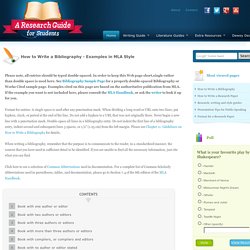 In order to keep this Web page short,single rather than double space is used here. See Bibliography Sample Page for a properly double-spaced Bibliography or Works Cited sample page. Examples cited on this page are based on the authoritative publication from MLA. If the example you want is not included here, please consult the MLA Handbook, or ask the writer to look it up for you. Format for entries: A single space is used after any punctuation mark. When writing a bibliography, remember that the purpose is to communicate to the reader, in a standardized manner, the sources that you have used in sufficient detail to be identified. Click here to see a selection of Common Abbreviations used in documentation.

Language and personality. « previous post | next post » "Are you a different person when you speak a different language? 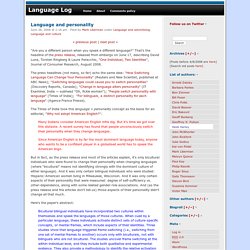 " That's the headline of the press release, released from embargo on June 17, describing David Luna, Torsten Ringberg & Laura Peracchio, "One Individual, Two Identities", Journal of Consumer Research, August 2008. The press headlines (not many, so far) echo the same idea: "How Switching Language Can Change Your Personality" (Reuters and New Scientist, published at ABC News); "Switching languages could cause you to switch personalities" (Discovery Reports, Canada); "Change in language alters personality" (IT Examiner, India — subhead "Oh, fickle woman"); "People switch personality with language" (Times of India); "For bilinguals, a distinct personality for each language" (Agence France Presse).

The Times of India took this language = personality concept as the basis for an editorial, "Why not adopt American English? ": Many Indians consider American English infra dig. Ożańska-ponikwia, k. 2012. what has personality and emotional intelligence to do with ‘feeling different’ while using a foreign language? international journal of bilingual education and bilingualism. Being Bilingual: Two Languages, Two Personalities. The Routledge Handbook of Multilingualism. 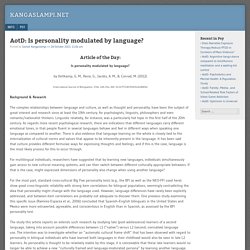 By Veltkamp, G. M., Recio, G., Jacobs, A. M., & Conrad, M. (2012) (International Journal of Bilingualism, 17(4). 496-504. Handbook of Multilingualism and Multilingual Communication. Change of Language, Change of Personality? Part II. In a first post on this topic (see here), I discussed whether bilinguals who speak two or more languages change their personality when they change language. 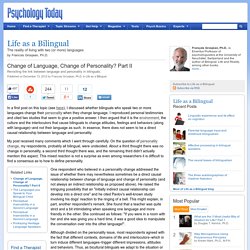