The Sixties Scoop: How Canada’s “Best Intentions” Proved Catastrophic. By Lloyd Dolha In his seminal work, Native Children and the Child Welfare System, researcher Patrick Johnston coined the term “Sixties Scoop” to describe an alarming national phenomenon in which Status Indian children were taken from their homes and communities by provincial child welfare authorities to be placed in non-aboriginal foster homes for adoption. 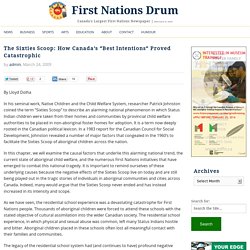 It is a term now deeply rooted in the Canadian political lexicon. In a 1983 report for the Canadian Council for Social Development, Johnston revealed a number of major factors that congealed in the 1960’s to facilitate the Sixties Scoop of aboriginal children across the nation. In this chapter, we will examine the causal factors that underlie this alarming national trend, the current state of aboriginal child welfare, and the numerous First Nations initiatives that have emerged to combat this national tragedy.

As we have seen, the residential school experience was a devastating catastrophe for First Nations people. Dr. Sixties Scoop. The Sixties Scoop & Aboriginal child welfare In the case of Aboriginal mothers, stories of government involvement in family life often go back generations. 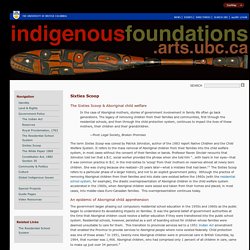 Sixties Scoop victims demand apology, compensation. Aboriginal adoptees forced from their families by the Canadian government in the Sixties Scoop are expected to receive what is believed to be the first public government apology on Thursday. 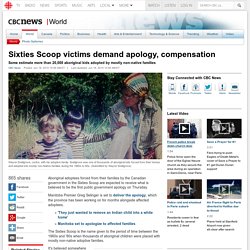 Manitoba Premier Greg Selinger is set to deliver the apology, which the province has been working on for months alongside affected adoptees. The Sixties Scoop is the name given to the period of time between the 1960s and '80s when thousands of aboriginal children were placed with mostly non-native adoptive families. I remember my uncle crying, I remember him packing a suitcase, and hugging me and kissing me goodbye. - Marlene Orgeron, adopted during Sixties Scoop It's believed somewhere between 11,000 and 20,000 aboriginal children were removed from their homes and placed with new families in Canada, the U.S. and Europe.

Some estimate more than 20,000 aboriginal children were relocated. "I remember my uncle crying, I remember him packing a suitcase, and hugging me and kissing me goodbye," she says. Origins Canada. The ‘Sixties Scoop’ still ripples through Canadian families. Last week, Manitoba became the first province to apologize for the Sixties Scoop, where, from the 1960s to 1980s, upwards of 20,000 of Canada’s aboriginal children were forcibly taken from their families and sent to white families for adoption in Canada or abroad. 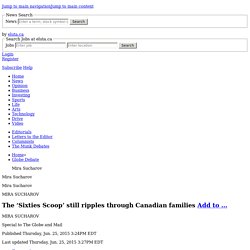 Not every aboriginal child in the foster and adoption system during those years was a product of the Scoop of course, but the political and psychological dynamics of aboriginal-to-white-family adoptions loom large. This is even more so now, in light of the release of the Truth and Reconciliation Commission. Naomi Lazarus remembers the day her seven-year-old foster sister, Cherie, was taken away. It was 1984, and Lazarus’s family was hoping to make permanent the loving home they had provided for the bright and charming girl who had suffered through the devastation of separation from seven homes in the previous two years.

“We were all madly in love with her,” Ms. Ms. But then that adoption plan, too, fell through. Ms. 60s Scoop child turns horrifying experience into strong advocacy. Author: By Shari Narine Sage Contributing Editor SASKATOON Forty-one years ago Lynn Thompson was stolen from off the Pine Creek First Nation in Manitoba. 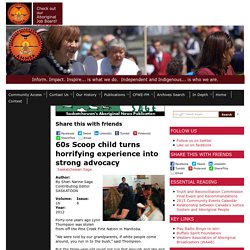 “We were told by our grandparents, if white people come around, you run in to the bush,” said Thompson. But the three-year-old could not run fast enough and she and her two sisters, one of whom she carried on her back and the other she was pulling, were apprehended by social workers. Her eight-year-old uncle, who kicked the men who were taking her, was also grabbed. Thompson was one of a conservatively estimated 20,000 children who were apprehended in the 1960s through to the 1980s. “I would have given anything to have been in a residential school, to have other brown faces around,” said Thompson, who shot herself while in care. The pain of Thompson’s childhood, which she classifies as “pretty messed,” followed her into adulthood. Twelve years ago, Thompson accompanied a partner to Saskatchewan. 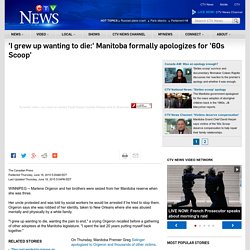 Her uncle protested and was told by social workers he would be arrested if he tried to stop them. Orgeron says she was robbed of her identity, taken to New Orleans where she was abused mentally and physically by a white family. "I grew up wanting to die, wanting the pain to end," a crying Orgeron recalled before a gathering of other adoptees at the Manitoba legislature. "I spent the last 20 years putting myself back together.

" On Thursday, Manitoba Premier Greg Selinger apologized to Orgeron and thousands of other victims. "With these words of apology and regret, I hope that all Canadians will join me in recognizing this historical injustice. " Adoptees were subjected to medical exams and treated "like we were pets," he said. "The struggles carry on to this very day. "