Panama Papers (wikipedia) Countries with politicians, public officials or close associates implicated in the leak on April 15, 2016 (As of May 19, 2016) The Panama Papers are 11.5 million leaked documents that detail financial and attorney–client information for more than 214,488 offshore entities.[1] The leaked documents were created by Panamanian law firm and corporate service provider Mossack Fonseca;[2] some date back to the 1970s.[3] The leaked documents illustrate how wealthy individuals and public officials are able to keep personal financial information private.[4] While offshore business entities are often not illegal, reporters found that some of the Mossack Fonseca shell corporations were used for illegal purposes, including fraud, kleptocracy, tax evasion, and evading international sanctions.[5] 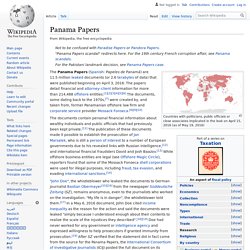 Panama Papers: Debate with Yanis Varoufakis. What the Panama Papers Actually Show (cato.org) For the past several days, much of the liberal media has been abuzz with the news that more than 11.5 million documents from a Panamanian law firm had been leaked. 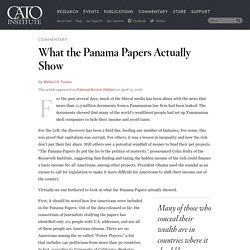 The documents showed that many of the world’s wealthiest people had set up Panamanian shell companies to hide their income and avoid taxes. For the Left, the discovery has been a field day, feeding any number of fantasies. For some, this was proof that capitalism was corrupt. For others, it was a lesson in inequality and how the rich don’t pay their fair share. Still others saw a potential windfall of money to fund their pet projects. Virtually no one bothered to look at what the Panama Papers actually showed. Many of those who conceal their wealth are in countries where it should be impossible to amass wealth. What the Panama Papers Tells Us About Global Capitalism. The Panama Papers: The Secrets Of The Super Rich - Four Corners. Americans Named in Panama Papers Leak. 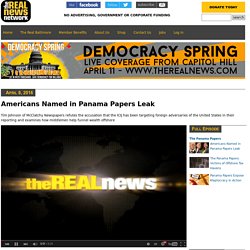 Prior to returning to Washington earlier this year, he served as a foreign correspondent in Beijing (2003-2009) and Mexico City (2010-2016). transcript. The Panama Papers Are Only the Beginning. Oh, were Mark Lombardi alive today! 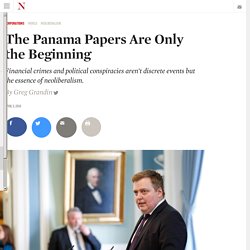 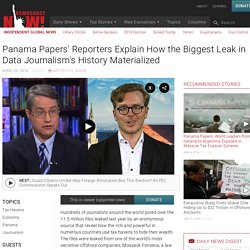 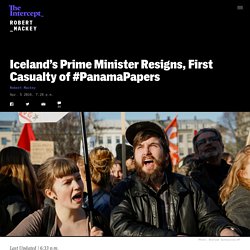 ICELAND’S PRIME MINISTER, Sigmundur Davíð Gunnlaugsson, resigned on Tuesday, becoming the first leader to be forced from office over the secret financial dealings revealed by the Panama Papers leak. The prime minister, who was elected to parliament as a reformer in 2009, promising transparency following the ruinous collapse of three Icelandic banks the year before, failed to disclose that his family secretly held bonds worth millions of dollars in the same banks, through a shell company in the British Virgin Islands. Gunnlaugsson told members of his Progressive Party that he would be replaced by the minister of fisheries, Sigurður Ingi Jóhannesson, according to Reykjavik Media, a local investigative site whose founder, Jóhannes Kr. Kristjánsson, confronted the prime minister during an on-camera interview broadcast on Sunday. Gunnlaugsson plans to remain as the party leader and wants to keep his seat in parliament. 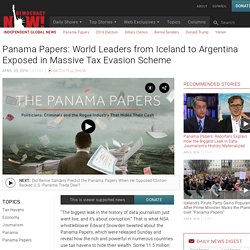 He is co-author of the book Panama Papers: The Story of a Worldwide Revelation. Michael Hudson. Tangerine Bolen - Below is a five second video of... Panama Papers: Document leak exposes global corruption, secrets of the rich. The financial secrets of heads of state, athletes, billionaires and drug lords have been exposed in the latest — and biggest ever — leak of records from an offshore tax haven. 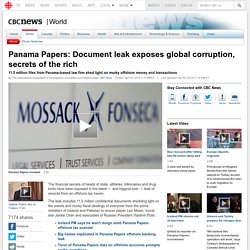 The leak includes 11.5 million confidential documents shedding light on the assets and murky fiscal dealings of everyone from the prime ministers of Iceland and Pakistan to soccer player Leo Messi, movie star Jackie Chan and associates of Russian President Vladimir Putin. The records, dating as far back as 1977, come from a little-known but highly influential Panama-based law firm called Mossack Fonseca, which has 500 staff working in 40-plus countries. The Panama Papers: ‘Biggest Leak in History’ Exposes Global Web of Corruption. An anonymous source, an enormous cache of leaked documents, and a year-long investigative effort by around 400 journalists from more than 100 media organizations in over 80 countries have yielded the Panama Papers, an unprecedented look at how the world’s rich and powerful, from political leaders to celebrities to criminals, use tax havens to hide their wealth. 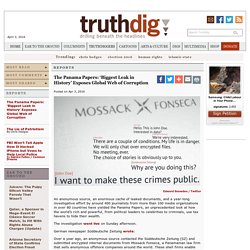 The investigation went live on Sunday afternoon. German newspaper Süddeutsche Zeitung wrote: Over a year ago, an anonymous source contacted the Süddeutsche Zeitung (SZ) and submitted encrypted internal documents from Mossack Fonseca, a Panamanian law firm that sells anonymous offshore companies around the world. These shell firms enable their owners to cover up their business dealings, no matter how shady. Largest leak in history reveals world leaders and businesspeople hiding trillions in offshore havens. An anonymous source has handed 2.6TB worth of records from Mossack Fonseca, one of the world's largest offshore law firms, to a consortium of news outlets, including The Guardian.

The dump includes 11.5M files, whose contents reveal a complex system of tax evasion that implicates some of the richest, most powerful people in the world, from Vladimir Putin to former members of the UK Tory government and the father of UK Tory prime minister David Cameron. Putin is implicated in $2B worth of offshore accounts, in a scheme that also implicates his top cronies. Also implicated are Nawaz Sharif, the PM of Pakistan; Ukrainian president Petro Poroshenko; Icelandic prime minister Sigmundur Davíð Gunnlaugsson, and former Iraqi PM Ayad Allaw, as well as current and former members of China's politburo.

There's even a member of Fifa's ethics committee! Why the Panama Papers Are a Feminist Issue. The world is talking about tax this week, so here’s another tax story for you. 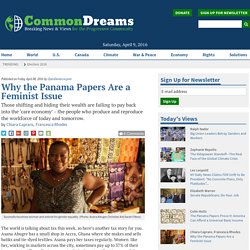 Asana Abugre has a small shop in Accra, Ghana where she makes and sells batiks and tie-dyed textiles. Asana pays her taxes regularly. Women like her, working in markets across the city, sometimes pay up to 37% of their income in tax. Tax collectors come to their shops to collect taxes, and there is no chance of them not paying, regardless of how little money they might have made that day. The Scandal Is What’s Been Legalized (The Intercept) FROM THE START of the reporting based on Edward Snowden’s leaked document archive, government defenders insisted that no illegal behavior was revealed. That was always false: Multiple courts have now found the domestic metadata spying program in violation of the Constitution and relevant statutes and have issued similar rulings for other mass surveillance programs; numerous articles on NSA and GCHQ documented the targeting of people and groups for blatantly political or legally impermissible purposes; and the leak revealed that President Obama’s top national security official (still), James Clapper, blatantly lied when testifying before Congress about the NSA’s activities — a felony.

US government, Soros funded Panama Papers to attack Putin (WikiLeaks) Washington is behind the recently released offshore revelations known as the Panama Papers, WikiLeaks has claimed, saying that the attack was “produced” to target Russia and President Putin. On Wednesday, the international whistleblowing organization said on Twitter that the Panama Papers data leak was produced by the Organized Crime and Corruption Reporting Project (OCCRP), "which targets Russia and [the] former USSR. " The "Putin attack" was funded by the US Agency for International Development (USAID) and American hedge fund billionaire George Soros, WikiLeaks added, saying that the US government's funding of such an attack is a serious blow to its integrity.

Organizations belonging to Soros have been proclaimed to be "undesirable" in Russia. Prosecutors then said the activities of the institute and its assistance foundation were a threat to the basis of Russia’s constitutional order and national security. Read more "It seems to be skewed at least a way from American interest. What I Learned From the Panama Papers (corbettreport)

«Cherry picking» leaked documents: a CIA art form. The US Central Intelligence Agency, rather than attempt to deter massive leaks of sensitive documents, including classified US government materials, has figured out it is much more advantageous to «cherry pick» certain information and then release it as «major news» to a corporate media eager and willing to run with what they are handed. Panama Leaks. Panamapapers.