POWER AND RESISTANCE TO POWER 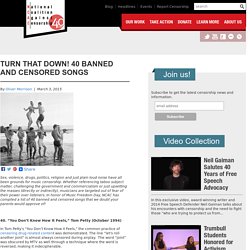 Whether referencing taboo subject matter, challenging the government and commercialism or just upsetting the masses (directly or indirectly), musicians are targeted out of fear of their power over listeners. In honor of Music Freedom Day, NCAC has compiled a list of 40 banned and censored songs that we doubt your parents would approve of! 40. “You Don’t Know How It Feels,” Tom Petty (October 1994) In Tom Petty’s “You Don’t Know How it Feels,” the common practice of censoring drug-related content was demonstrated. 39. MTV, BET and numerous radio stations banned the rapper The Game’s “Red Nation” due to its references to gang life. 38. The song “Greased Lightning” from the musical and film Grease, surprisingly features some fairly crude content. 37. This rock classic, originally called “Brown Skinned Girl,” is about an interracial relationship. 36. 35. 34. 33. 32. 31. 30. 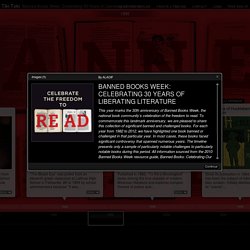 The novel was banned in Pakistan, Saudi Arabia, Egypt, Somalia, Sudan, Bangladesh, Malaysia, Qatar, Indonesia, South Africa, and India in 1989 because of its criticism of Islam. Sales of the book were restricted or criminalized in Venezuela, Japan, Bulgaria, and Poland. Iran’s Ayatollah Khomeini issued a fatwa or religious edict, stating, “I inform the proud Muslim people of the world that the author of ‘The Satanic Verses,’ which is against Islam, the prophet, and the Koran, and all those involved in its publication who were aware of its content, have been sentenced to death.”

Bridge to Terabithia, by Katherine Paterson Paterson’s novel for young people was challenged in 1986 as recommended reading for 6th grade students in the Lincoln, NE schools. Review: The Bluest Eye by Toni Morrison. Banned on the Run: 20 Shocking Classic Album Covers [NSFW] Join us as we take a look at 20 of the most shocking, banned classic album covers of all time. 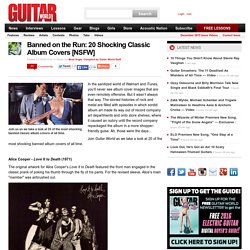 In the sanitized world of Walmart and iTunes, you’ll never see album cover images that are even remotely offensive. But it wasn’t always that way. The storied histories of rock and metal are filled with episodes in which sordid album art made its way out of record company art departments and onto store shelves, where it caused an outcry until the record company repackaged the album in a more shopper-friendly guise. Ah, those were the days... Join Guitar World as we take a look at 20 of the most shocking banned album covers of all time. Alice Cooper - Love It to Death (1971) The original artwork for Alice Cooper's Love It to Death featured the front man engaged in the classic prank of poking his thumb through the fly of his pants.

The Beatles - Yesterday and Today (1966) Meat the Beatles. The Black Crowes - Amorica (1994) Blind Faith - Blind Faith (1969) Bon Jovi - Slippery When Wet (1986) Banned-books. CENSORED AND BANNED BOOKS IN AMERICA Responding to the Meese commission's official approval of pressure-group censorship, Waldenbooks staged a promotion featuring 52 volumes that had been "challenged, burned or banned somewhere in the United States in the last 15 years. 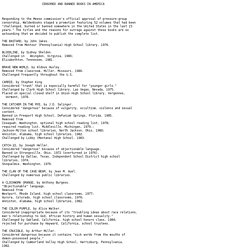 " The titles and the reasons for outrage against these books are so astounding that we decided to publish the complete list. THE BASTARD, by John Jakes. Removed from Montour (Pennsylvania) High School library, 1976. BLOODLINE, by Sidney Sheldon. Challenged in Abingdon, Virginia, 1980; Elizabethton, Tennessee, 1981. The Best of Banksy Street Art.

Related:  Humanities Resources - Cornerstone College (Mt Barker, SA)   -  You Should Know This   -  the theory of everything   -  Education   -  Enterprise