10 Most Beautiful Villages in Europe 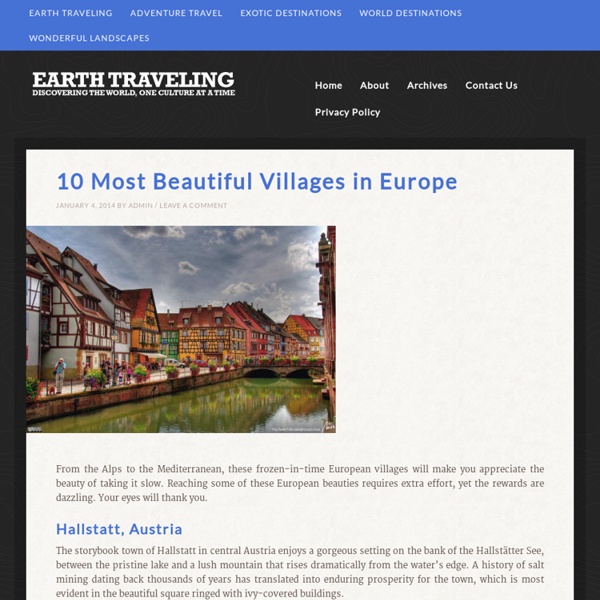 From the Alps to the Mediterranean, these frozen-in-time European villages will make you appreciate the beauty of taking it slow. Reaching some of these European beauties requires extra effort, yet the rewards are dazzling. Your eyes will thank you. Hallstatt, Austria The storybook town of Hallstatt in central Austria enjoys a gorgeous setting on the bank of the Hallstätter See, between the pristine lake and a lush mountain that rises dramatically from the water’s edge. A history of salt mining dating back thousands of years has translated into enduring prosperity for the town, which is most evident in the beautiful square ringed with ivy-covered buildings. Manarola, Italy Manarola is a small town, a frazione of the comune (municipality) of Riomaggiore, in the province of La Spezia, Liguria, northern Italy. Image Source Bibury, England Image Source Colmar, France Image Source Reine, Norway Image Source Pučiśća, Croatia Image Source Telč, Czech Republic Image Source Cong, Ireland Image Source

Most Beautiful Villages Around The World photo Popeye Village, is a group of rustic and ramshackle wooden buildings located at Anchor Bay in the north-west corner of the Mediterranean island of Malta. Photo by: Mosin Village on the bank of the Niger river, Mali. Photo by: Yann Arthus-Bertrand Hidden mountain village in Southern China.

30 Beautiful Doors That Seem To Lead To Other Worlds Most doors are hopelessly mundane, but they don’t have to be; they can also serve as meaningful symbols of portals between worlds or between different aspects of our lives. When we set out to create a list of beautiful doors around the world, we were surprised to find just how many truly amazing doors there are out there that have been decorated with beautiful craftsmanship and artwork. The door is probably the single part of a building’s exterior that people will interact most frequently with, so if you want a building to look impressive up close, there’s probably no better way to do this than by having a beautiful door. Burano, Italy

Top 7 Most Unique Restaurants in the World There’s nothing like eating a delicious meal with a magnificent view. From high in the sky to under the sea, these 7 restaurants with unique surroundings are a feast for the eyes. 7. Wet Feet and Waterfalls Labassin Waterfall Restaurant – Philippines San Pablo City in the Philippines is the home of a resort that offers one truly remarkable and unique feature. This resort is the Villa Escudero Resort and the feature is a waterfall restaurant.

Still Looking For Paradise? Maldives - justpaste.it Double chain of twenty-six atolls… The Republic of Maldives, or simply the Maldives, is an island nation in the Indian Ocean. It consists of approximately 1,190 coral islands grouped in a double chain of 26 atolls, along the north-south direction, spread over roughly 90,000 square kilometers, making this one of the most disparate countries in the world. The atolls are composed of live coral reefs and sand bars, situated atop a submarine ridge 960 kilometers long that rises abruptly from the depths of the Indian Ocean and runs from north to south.

The 15 Most Beautiful Flowers In The World Canna Cannas not only feature pretty blossoms, but also beautiful leaves (often likened to that of the banana plant) that come in a variety of stunning colors. Popularized in Victorian times, Cannas are popular garden plants. Cherry Blossom 20 Places to see in your 20s - WORLD OF WANDERLUSTWORLD OF WANDERLUST TOP 20: 20 Places to See in your 20s 20. Lantern Festival, Taiwan Here’s a photo you’ve likely seen doing the endless rounds on social media – and it’s little wonder due to the spectacular nature of the photograph, which encapsulates the spirit and wonder of the Pingxi Sky Lantern Festival in Taiwan. 19. Great Wall of China

10 Most Famous Trees in the World Famous trees come and go. L’Arbre du Ténéré was once considered the most isolated tree on Earth, a landmark on caravan routes in the Sahara, until it was knocked down by a drunk Libyan truck driver in 1973. This year in August, the famous Anne Frank tree in Amsterdam was blown down by high winds during a storm. Luckily, there are still many special trees out there. An overview of the most famous trees in the world. Rain Storm over Tulip Field Random photo Submit your photo Stumble Thru landscape photography, nature photography Discover These 5 Hidden Beaches in the Philippines Before Everyone Else Does! As an archipelago with 7,107 islands, you’ll never run out of beaches to explore in the Philippines. Boracay may get mentioned a lot when it comes to Philippine beaches due to its long stretch of powdery white sand but there are other wonderful beaches to see. It just takes a bit of effort getting to them. If secluded beaches boasting pristine white sand and a gradient of sapphire and emerald water interest you, then prepare yourself for a rugged journey and don’t forget to pack camping gear as well.

Breathtaking Travel Photography by Weerapong Chaipuck Thailand-based photographer Weerapong Chaipuck captured stunning landscape and people photos from around the world during his travels after early retirement from the profession in the medical field… Weerapong Chaipuck Ten Amazing Subterranean Structures from the Ancient World From ancient cisterns and water systems to mysterious caves, underground crypts, subterranean temples and even entire cities built beneath the earth, what our ancient ancestors have achieved is both mind-boggling and breathtaking. Here we feature ten incredible ancient sites that can be found underground. The amazing subterranean Basilica Cistern Hidden beneath the city of Istanbul, Turkey, are hundreds of ancient cisterns that stored and supplied water to its inhabitants in the ancient past. The largest of these is the Basilica Cistern.

Pictures of Clouds and Sunsets - What a Wonderful World Long’s Peak – Sunset Pictures of Clouds and Sunsets credit: David Evenson These pictures of clouds, nature and landscape are really inspirational. Clouds are created when rising air, through expansion, cools to the point where some of the water vapor molecules “clump together” faster than they are torn apart by their thermal energy. Some of that (invisible) water vapor condenses to form (visible) cloud droplets or ice crystals. After cloud droplets form, one of two things happen.

Europe is indeed very beautiful! The views and places are normally awesome. Wish I can reach in these beautiful places. by phyllisbliss Sep 16

Related:
Related:  explore   -  Idee   -  Unique   -  guichet unique / citoyenneté   -  Popular Culture   -  Popular Articles from The Book Chook   -  Top Popular Mobile Apps   -  Beautiful Places to Visit -   -  Self Made Scholar - Free Self Education Classes Online   -  An alternative view of New York | Forgotten New York   -  Problem loading page   -  History: Vikings   -  Mystical, Magical & Magnificent Monasteries in Meteora (20 Pics)   -  The Town with No Roads   -  15 Most Magical Places in the World | Travel Blog - Tripbase   -  50 of the Most Important Landmarks of the World (Part 1)   -  The Secret Yumiverse - Illustrated tips and tricks from the mind of Yumi « Wonder How To   -  The Seven Lost Cities Of The World   -  Amazing Events Around the World   -  European Centre for Disease Prevention and Control   -  Fukushima Diary | Fukushima accident to go-on 40 more years   -  EUROPA - Food and Veterinary Office - Introduction   -  British History   -  Why Iceland Should Be in the News, But Is Not :: SACSIS.org.za   -  Emerging pests and vector-borne diseases in Europe - Products - Wageningen Academic Publishers   -  The Cool Hunter - Amazing Places To Experience Around The Globe (Part 1)   -  The Triple Waterfall Of Baatara Gorge   -  The causes: A very short history of the crisis | The Economist   -  Ten Anime Series You Should See Before You Die | Tor.com   -  Best of History Web Sites   -  Hidden Travel Place | The Beauty of Hidden Place in the World find and explore here on Hidden Travel Place blog .   -  The 50 Most Beautiful Natural Waterfalls in the World