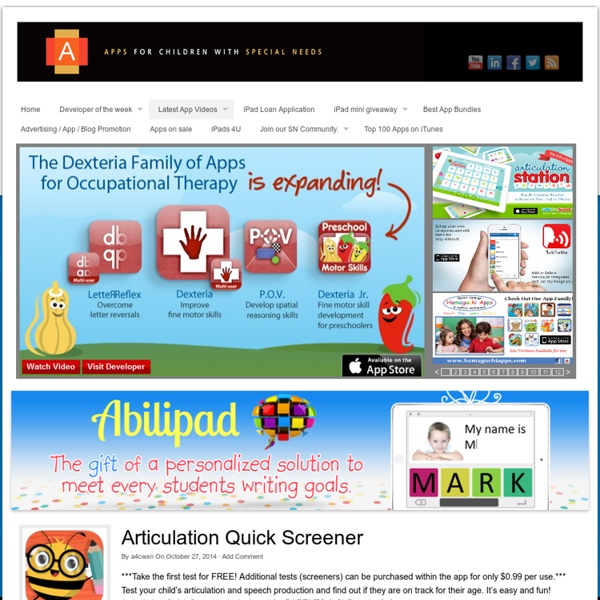 Other Organizations Gifting Apple Devices Our goal is to NOT have those in need sitting on waiting lists – including OURS! So we’ve put together this list of other organizations gifting either funds or devices. They each have their own restrictions and limitations. The information listed was taken directly from each organization’s sites. Intellipad iPad app focuses on special education needs The iPad is becoming increasingly popular in academic settings, gracing everything from undergraduate lecture halls to medical schools to grade-level classrooms. But the iPad’s educational uses don’t stop there. Intellipad’s new Intellipad 1.0 iPad app aims to make Apple’s tablet more useful for special education, especially kids learning to read, write, and communicate. “I feel as though the iPad was developed specifically with the special needs child in mind,” Cheryl Bregman, Director of Intellipad and an occupational therapist, told Macworld.

iPod Touch/iPhone App Round Up for Users with Significant Disabilities and Those who Teach Them Updated June 19, 2010 Please note YGWYPF notation means "You get what you pay for!"T&T means the blog author uses this applicationBIC is Best in Category, based only on the authors impression, no other criteria are in play * means that the app has been used by the author iPad Apps for Autistic Students Apps on portable devices such as the Apple iPad can help non-verbal children to communicate basic needs. Intuitive apps that employ colorful images and sounds can also hold a child's attention long enough to learn and offer effective tools to build vocabulary and reinforce word knowledge. The following iPad apps are designed to augment self-expression among children with autism spectrum disorders and other cognitive impairments. Becoming more comfortable with language may also encourage more safe social interaction among family members and classmates. 1.

The new Periodic Table of iPad Apps for Primary aged pupils – ICTEvangelist I’ve always enjoyed thinking of ideas about how we can utilise technology for purposeful means in the classroom. It is often we see the simplest ideas making the biggest impact on teaching and learning. I’m still asked regularly for apps for particular subjects, asking children to use devices as sources of information rather than vehicles or tools to express learning. The iPad has always given us the opportunity to do so much more than consume information giving us opportunities instead to use our creativity to express our learning, to test our learning, to share and publish what we do. Therefore it has given me real pleasure to create this new Periodic table of iPad apps; this time focusing on tools to support younger learners.

p-1450446905451 Backyard Creations™ Sambra Steel Roof Gazebo Model Number: 2903170 | Menards® SKU: 2903170 Online Price Online price may differ from your local Menards®. 68 Apps for Students with Learning Disabilities The iPad can be a highly effective tool for students with learning disabilities, and more and more apps are targeting areas of need for students in elementary school, high school, and college/university. Here is an updated list of recommended apps for students with learning disabilities. We recently presented these apps at the Learning Disability Association of Quebec’s “Toolbox for Success” parent conference. We’ve broken our recommendations down into the following categories:

The Mac-cessibility Network – News [Lioncourt.com] As is our custom at Mac-cessibility, we won’t be covering the more general enhancements and additions to the iOS operating system which powers Apple’s mobile devices in this review. While some of the new features will certainly be relevant to our discussion, we’re going to be primarily focussing on what’s new in terms of accessibility, especially where regards VoiceOver. A Note on Timing A few people have asked us why we waited so long to publish our review of iOS 5 and the new features found in VoiceOver.

educreations teacherswithapps Educreations Interactive Whiteboard, by Educreations, Inc, is an incredible, yes that’s right, INCREDIBLE app. This newly released app comes with the huge bonus of being FREE! We think this app has the edge needed to push education in the right direction and to begin modernizing teaching as we know it. iDevices in the Special Education Classroom A number of built-in accessibility features, tools, and add-ons are helping to prompt Apple's iPad into the classroom. Now, the push to get textbooks accessed through this device to get rid of all those heavy books, ah, it is happening!! With a text reader and highlighter, this will really be something worth talking about.

TouchChat HD - AAC with WordPower™ - TouchChat - Communication Apps for iPad, iPhone, and iPod Touch TouchChat is a full-featured communication solution for individuals who have difficulty using their natural voice. TouchChat is designed for individuals with Autism, Down Syndrome, ALS, apraxia, stroke, or other conditions that affect a person’s ability to use natural speech. TouchChat 2.0 provides both English and Spanish options in one app and provides a universal app supporting iPhone®, iPod®, and iPad®. This version of TouchChat HD is bundled with the WordPower™ series of AAC vocabularies designed by Nancy Inman. There are multiple WordPower™ vocabularies that allow for easy and intuitive communication.

about my Wheel of Autism Apps This is a quick post in response to some comments and questions about my app wheel, which has been doing some alarmingly extensive rounds on Twitter and the like. Other groups have been putting together lists of recommended apps formatted in this way. In particular I’m a fan of this wheel of apps for autism developed in Australia, and a dyslexia app wheel created by my colleagues at CALL Scotland.