Exploring the impact of Apple's iPad on schools & schooling. - Part 1. The 101 Most Useful Websites on the Internet. What The iPad Has Done To Education - As the iPad approaches popularity that’d make The Beatles blush, it’s easy to forget what technology in learning looked like before the little tablet from Cupertino entered our collective pedagogical consciousness. 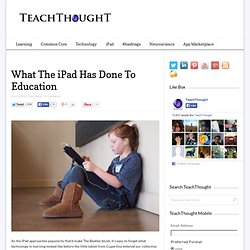 It’s also easy to forget what exactly it does from a functional perspective that makes it such an effective teaching tool. When adopting any new learning tool, from technology to curricula to instructional strategies, the clearer the picture of how that tool ideally functions can be helpful in improving its use. The Learning Process One of the more powerful ways technology can support learning is by removing barriers. The iPad has been a boon functioning as a communication tool for students who have challenges communicating, from learners with autism to English Language Learners. 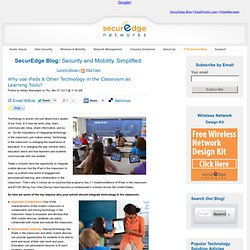 Posted by Ashley Wainwright on Thu, Mar 07, 2013 @ 11:42 AM Technology is woven into just about every aspect of our lives. It is how we work, play, learn, communicate, shop, share information, and so on. So the importance of integrating technology in the classroom just makes sense. Technology in the classroom is changing the experience of education. Today’s schools have the opportunity to integrate mobile devices like the iPad in the classroom to open up a whole new world of engagement, personalized learning, and collaboration in the classroom. 10 Mind-Blowing Mobile Learning Statistics Infographic. Mobile Learning Infographics 10 Mind-Blowing Mobile Learning Statistics Infographic By 2015 80% of people will be accessing the Internet from mobile devices.In 2012, 65% of workers declared their mobile devices to be their “most critical work device.”65% of information searches started on a smartphone with 64% of these searches continued on a PC or tablet.99% of mobile learners believed the format and presentation enhanced their learning75% of mobile learners praised the convenience and time management benefits46% of mobile workers would pic a smartphone over a tablet or a laptop as their favorite device45% spend less time in training with no lost of comprehensionMobile learners study 40 minutes more each week by studying everywhere they go.Users studying on mobile devices are 3 times more likely to track their progress.Students with smartphones are twice as likely to study between 6am and 8am. 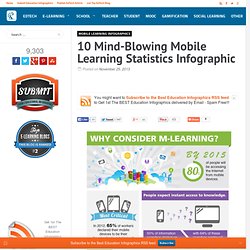 The Why Consider M-Learning Infographic was created by Michaels & Associated Learning Solutions. Best of 2013 So Far... Studies of iPad Use In Education. We're half-way through 2013. 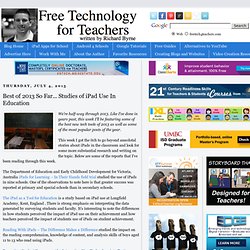 Like I've done in years past, this week I'll be featuring some of the best new tech tools of 2013 as well as some of the most popular posts of the year. This week I got the itch to go beyond anecdotal stories about iPads in the classroom and look for some more substantial research and writing on the topic. Below are some of the reports that I’ve been reading through this week. The Department of Education and Early Childhood Development for Victoria, Australia iPads for Learning – In Their Hands field trial studied the use of iPads in nine schools. One of the observations to note here is that greater success was reported at primary and special schools than in secondary schools. The iPad as a Tool for Education is a study based on iPad use at Longfield Academy, Kent, England .

The Impact of the iPad and iPhone on Education was published in 2010 and is speculative in nature as the students surveyed had not yet been given iPads. A Practical Guide For Teachers Who Just Got iPads. So you finally got a class set of iPads and you are not sure what to do next and where to start? Here is a very simple list of tried and true tips to help. Don’t Start Collecting Apps! This is every teachers first inclination. So Stop! Stop scouring the internet for apps you think you might use with your class. Here is my onescreen of Apps – these include a few of my own personal productivity favorites.