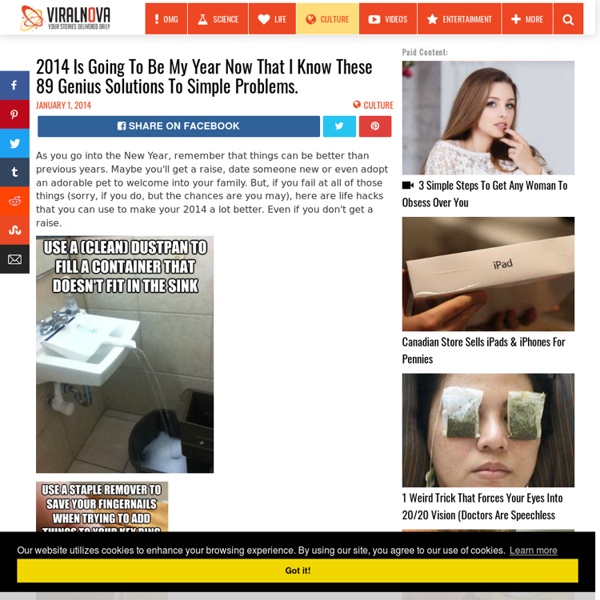 Abstract Maps The cartographic work of Toronto-based self-taught artist Jazzberry Blue is awesome. At the edge of abstraction, the major cities such as Paris, New York or London, are shown around the axes that compose and structure: streets, rivers … An original way to rediscover these cities. 16 Awesome Life Hacks That are So Simple The best things in life are free. Not only that, but the best things in life can be made so much better with these easy life hacks. Anyone can pull these tricks off and, when you do, you’ll feel like a total champ. Not only that, but you’ll look like a champ. Check them out and start winning at life. 1. Fan Is A Tool-Using Animal—dConstruct Conference Talk Let me give you some examples. Not all of these may link to live search results anymore, since fic changes fast. But they were all collected from the wild! pairing:chekhov/sulu

Off Grid Info - Food Independence - Where To Get Heirloom Seeds - Non-GMO Seeds - Organic Seeds Join 75,000+ Fans on Facebook: Follow Us On Pinterest: Please Share This Page: Here is a useful list of 40+ 230+ companies supplying heirloom / non-GMO / organic seeds. How Hemp Became Illegal: The Marijuana Link If I told you there was a plant available to us today that could be grown in pretty much any soil, requires no pesticides and it takes very little maintenance to grow, and this magical plant could be used for a very large number of necessities and goods we use today yet we don’t use it, would you think to yourself “Joe you must be high or on some other cheap drug?” Well potential naysayers out there, I’m not high nor do I get high, but let me tell you, there is a plant available right now and it is often mistaken to be marijuana but has capabilities that are beyond what you could imagine. It’s called Hemp.

Famous Television Show Home Floor Plans After years of watching shows like Dexter and Two and a Half Men, you can’t help but become so attached to the television show that you start wondering what their household really looks like. Spanish interior designer Iñaki Aliste Lizarralde had the same thought as us, and decided to do something for himself creating this incredible series of highly detailed floor plans from some of our favorite television shows. The collection includes the likes of The Simpson, Dexter, Friends, Seinfeld, Two and a Half Men, The Big Bang Theory, How I Met Your Mother, and a handful others. Each of the floor plans is highly detailed, and not only includes the architectural side of things, but also goes into immense furnishing details really bringing these television shows to life. As a huge fan of a lot of these shows, this was definitely a project we could appreciate the amount of time and effort that was put in.

10 Lifehacks from 100 Years Ago In the late 1880s, cigarette manufacturers began inserting stiffening cards into their paper packs of cigarettes to strengthen the containers. It wasn't long before they got the idea to put artwork, trivia, famous people, and pretty girls onto those cards, grouped into collectible series. The cards, which continued into the 1940s, are highly valuable now, with the most expensive (bearing the face of stringent anti-smoking baseball player Honus Wagner) selling for $2.8 million in 2007. In the 1910s, Gallaher Ltd of Belfast & London and Ogden's Branch of the Imperial Tobacco Co printed "How-To" series, with clever hints for both everyday and emergency situations. From steaming out a splinter to stopping a mad dog, these cigarette cards told you the smart way to handle many of life's problems. (Please note these cards were published a hundred years ago, when safety was not as popular a pursuit as it is now.

Visions of the Future Imagination is our window into the future. At NASA/JPL we strive to be bold in advancing the edge of possibility so that someday, with the help of new generations of innovators and explorers, these visions of the future can become a reality. As you look through these images of imaginative travel destinations, remember that you can be an architect of the future. Click on any of the thumbnails below to learn more and download a free poster sized image. 6 Ways to Use Home Remedies to Get Rid of Gnats Edit Article Changing the EnvironmentVinegarSticky TrapSoap SprayAlcohol SprayVegetable Oil Edited by Catdog, Sghelardoni, BR, Adelaide A few stray gnats can quickly explode into a swarm in a matter of days.

“The Art of Clean Up” by Ursus Werhli « TYPOGRAFFIT : BLOG German artist Ursus Werhli takes obsessive compulsive behavior to a whole new level with his work in completely organizing various objects and situations in clever ways. Here are some selections from his book, “The Art of Clean Up”. (source) This entry was posted on Wednesday, December 11th, 2013 at 05:16:26 PM and is filed under BLOG English, BLOG Japanese . You can follow any responses to this entry through the RSS 2.0 feed. 45 Cool Things Everyone Should Learn You know what I love about the Internet? You can find courses, tutorials and lessons for almost anything – and many of them are free. Are you interested in learning to crochet or designing your own website but don’t know when you’ll have the time? Have you thought about taking up an instrument or learning to dance but can’t afford the cost of a class?