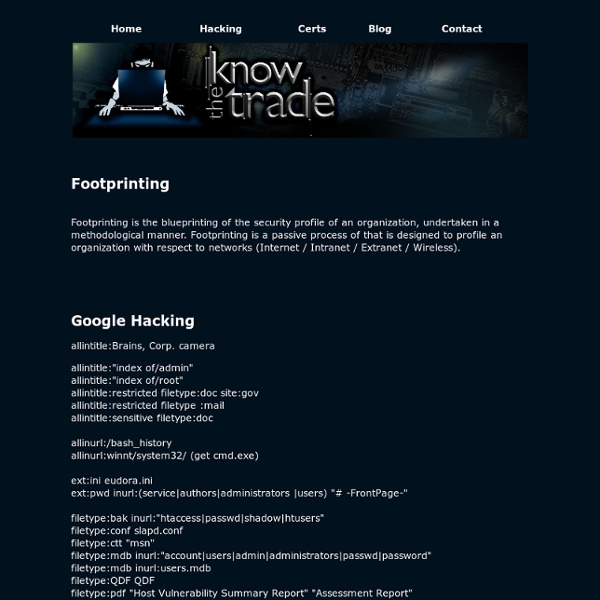 Using Googles Full Capabilities. « XBOX, XBOX 360, PS2, PS3, PSP, & MORE! – Your source for the latest in console modding. Well most of you use Google to probably look up porn. Other just search stuff. And others use Google to hack. Using Google, and some finely crafted searches we can find a lot of interesting information. For Example we can find: Credit Card Numbers Passwords Software / MP3′s …… (and on and on and on) Presented below is just a sample of interesting searches that we can send to google to obtain info that some people might not want us having.. Python interface to Microsoft Outlook Web Access Because I telecommute, I'm limited to using my company's webmail interface, Microsoft Outlook Web Access, rather than having direct POP or IMAP access to e-mail. This isn't ideal, for several reasons: Outlook Web Access has a horrendous user interface in any browser other than Internet Explorer. (And I'm on Linux, so I can't use Internet Explorer.) It's hard to search, the icons are unintuitive, it encourages top-posting and doesn't have the basic benefits of a desktop e-mail app, such as spell-checking and address auto-completion.

Painfully Computer Pranks ~ Computer Hacking Computer pranks to freak out your friends and make them crying for mummy I've been posting many articles about computer pranks on this blog (Deadly Virus Prank, The Ultimate Virus, How to Create a Fake and Harmless Virus and Facebook Virus Prank). Today , I will show you 5 great computer pranks that will frustrate your victims very much. These pranks could be very painfully, so please use them at your own risk ;) 1. How to use Google for Hacking. Google serves almost 80 percent of all search queries on the Internet, proving itself as the most popular search engine. However Google makes it possible to reach not only the publicly available information resources, but also gives access to some of the most confidential information that should never have been revealed. In this post I will show how to use Google for exploiting security vulnerabilities within websites. The following are some of the hacks that can be accomplished using Google. 1. Hacking Security Cameras

Hack FAQ Series. Volumes 1 thru 9 The complete Archives of Hack FAQ View Vol #1 What do I need to begin? , What are some good Websites? , What programming languages should I learn? , What is Telnet? How to gain access to system account the most powerful account in Windows. « Alien Eyes There is an account in Microsoft Windows that is more powerful than the Administrator account in Windows Operating Systems. That account is called System account it is similar to the root OR super user in the Linux/Unix world . I will show you how to access this system account in this article. You can use this facility for removing programs that are causing problems to your system, malware etc. Introduction If you look at the task manager (which can be launched by pressing [CTRL]+[ALT]+[DEL]) you will see some processes that are running with System level privileges.

DRM Removal How To Remove DRM from Audio Files Perhaps you've purchased music from iTunes and you want to play those tunes on a non-iPod music player. Apple says no. Maybe you've become a Mac or Linux user, and you need your WMA (Windows Audio) files in a standard, portable format. Microsoft says no. How about making backup copies of your music library? Huge Collection Of Hack Tutorial Videos - Download « TheMostBoringBlogInTheWorld **UPDATED** All download links are working! While bumming around the remote-exploit forums, trying to figure out how to optimize Backtrack to run from my hard drive (it still has that Live CD feel when booting and shutting down), I stumbled upon a HUGE collection of Hacking Tutorial Videos aggregated by michelinok a senior member from the forums. (Note: that there is some controversy as to who did what for these vids, but I’m staying out of that drama) The content list is amazing!! Here’s a little taste:

I hacked my secure wireless network: here’s how it’s done Wireless networks are everywhere; they are widely available, cheap, and easy to setup. To avoid the hassle of setting up a wired network in my own home, I chose to go wireless. After a day of enjoying this wireless freedom, I began thinking about security. How secure is my wireless network? I searched the Internet for many days, reading articles, gathering information, and participating on message boards and forums.