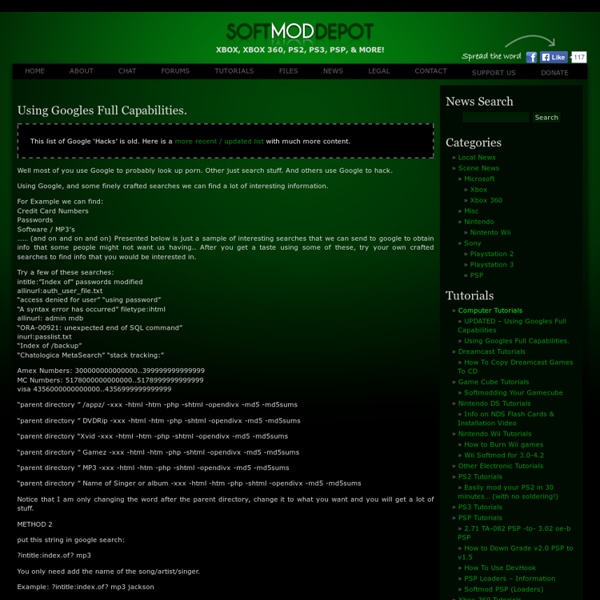 How To Crack A Wi-Fi Network’s WPA Password With Reaver Your Wi-Fi network is your convenient wireless gateway to the internet, and since you’re not keen on sharing your connection with any old hooligan who happens to be walking past your home, you secure your network with a password, right? Knowing, as you might, how easy it is to crack a WEP password, you probably secure your network using the more bulletproof WPA security protocol. Here’s the bad news: A new, free, open-source tool called Reaver exploits a security hole in wireless routers and can crack most routers’ current passwords with relative ease. Here’s how to crack a WPA or WPA2 password, step by step, with Reaver — and how to protect your network against Reaver attacks. In the first section of this post, I’ll walk through the steps required to crack a WPA password using Reaver. After that, I’ll explain how Reaver works, and what you can do to protect your network against Reaver attacks.

.:Computer Defense:. » Security Quite a while back I had posted everywhere and contacted everyone I knew regarding a Denial of Service survey that I was conducting. It came out of the frustration of watching people and companies disregard denial of service as a valid security concern. It seemed to be an ongoing debate -- Confidentiality & Integrity vs Availability, instead of all three being treated as important. Anyways I've been under constant hounding to release some statistics from the survey, so I figured I'd do a multi-part series on Denial of Service (ok... so right now it's planned as a 2-part series). This first part is a precursor, since I had numerous people argue on whether or not DoS and DDoS were the same thing or different things and also on whether or not DoS was still valid (more on that to come). Since the survey was part of a conference talk that I wanted to do and the talk wasn't accepted, I figure it's as good a time as any to start posting.

untitled Return to View video at: Prof Simon Cox Penetration Testing and Security Analysis Tools Penetration testing is a fascinating subject. Learning how to ethically hack a system in order to find vulnerabilities and prevent malicious hackers from taking advantage of an exploit is a dream for those who love to make money hacking but prefer not to wear orange jumpsuits in an 8’x10’ cell. Let’s take a look at some of the tools of the trade for the penetration tester, most of which are freely available for you to tinker with. PLEASE NOTE: There are laws restricting port scanning in many areas, even if it’s not malicious. Know that if you you use these tools on a system that you do not have permission to be on you will be subject to penalties. 1.

T E X T F I L E S Virii programs came into play in the 1980's in full force and to this day turn every online binary transfer into a potential hazard. Well, maybe that's not entirely true, but you wouldn't know it from the hype and hysteria bred in the world. Meanwhile, fascinating artistic studies of the programming of Virii exist out there and will be brought here. As a rule, I don't include Virus Source Code, since that's just programming, and boring as all hell. if there's a discussion or writing about how to make virii, I include that. This is the arbitrariness of the host. If you're looking for the excellent 40HEX Virus Magazine, it's located in the Magazines section.