How to hide files in JPEG pictures 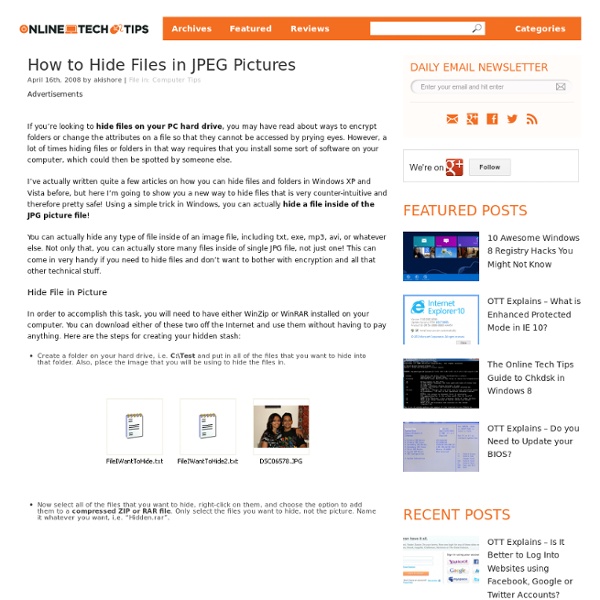 If you’re looking to hide files on your PC hard drive, you may have read about ways to encrypt folders or change the attributes on a file so that they cannot be accessed by prying eyes. However, a lot of times hiding files or folders in that way requires that you install some sort of software on your computer, which could then be spotted by someone else. I’ve actually written quite a few articles on how you can hide files and folders in Windows XP and Vista before, but here I’m going to show you a new way to hide files that is very counter-intuitive and therefore pretty safe! Using a simple trick in Windows, you can actually hide a file inside of the JPG picture file! You can actually hide any type of file inside of an image file, including txt, exe, mp3, avi, or whatever else. Not only that, you can actually store many files inside of single JPG file, not just one! Hide File in Picture Create a folder on your hard drive, i.e. Now here’s the fun part! And that’s it! That’s it!

JBIG JBIG is based on a form of arithmetic coding patented by IBM, known as the Q-coder, but using a minor tweak patented by Mitsubishi, resulting in what became known as the QM-coder. It bases the probabilities of each bit on the previous bits and the previous lines of the picture. In order to allow compressing and decompressing images in scanning order, it does not reference future bits. JBIG also supports progressive transmission with small (around 5%) overheads. 7 Tools to keep your Mac Healthy For the four years I’ve been using a Mac, I haven’t used a maintenance tool. All I’ve ever done was verify disk permissions, and maybe use Drive Genius to perform some optimisation. But even that was just something ‘extra’ and not necessary according to me. The real question is, can maintenance tools really help in getting your system speedy, healthy, and less prone to crashes?

Cain & Abel Cain & Abel is a password recovery tool for Microsoft Operating Systems. It allows easy recovery of various kind of passwords by sniffing the network, cracking encrypted passwords using Dictionary, Brute-Force and Cryptanalysis attacks, recording VoIP conversations, decoding scrambled passwords, recovering wireless network keys, revealing password boxes, uncovering cached passwords and analyzing routing protocols. The program does not exploit any software vulnerabilities or bugs that could not be fixed with little effort. It covers some security aspects/weakness present in protocol's standards, authentication methods and caching mechanisms; its main purpose is the simplified recovery of passwords and credentials from various sources, however it also ships some "non standard" utilities for Microsoft Windows users.

Hands-On UNIX System Administration — Spring 2011 Announcements (3/16) Kevin Mullally, manager of the EECS Instructional Support Group, and other INST staff will be holding a discussion with the OCF on system administration practices tomorrow, 17 March, at 1:30PM in 102 Barrows. Topics will include mail and web servers (e.g., anti-spam and CGI), as well as how the OCF is run. All are invited to attend!

# Send Files to Any Email Address Directly from Windows Explorer If you send lot of files to your friends as email attachments, you can avoid the hassle of uploading files. Though Gmail supports drag drop, you can choose to email a file directly by right clicking on the file or document. Users who need to frequently send emails with attached files, will know that this is a very simple procedure, but doing it repeatedly can be quite tedious. An application called developed by TheWindowsClub will simplify this task. This free tool lets you send files by email from a friendly context menu without opening a client application. TCP/IP For Dummies Cheat Sheet Cheat Sheet As a network administrator, you know that TCP/IP is the glue that holds the Internet and the Web together. As well as being familiar with security terms and general definitions, you need to pay attention to RFCs (Requests for Comment) published by the Internet Engineering Task Force. You can comment on, learn from, and submit RFCs yourself. TCP/IP Definitions Knowing your way around TCP/IP is key if you want to manage a network successfully.

Lucid Puppy QuickSet edition Lucid Puppy Quickset edition(LupQ) is an alternative of the Lucid Puppy Linux(Lupu) 5.1.1. LupQ holds the innovative feature of Lupu, binary compatible with Ubuntu Lucid, 'choice your browser' with Quickpet, and goes directly to the desktop. But LupQ goes further beyond it. Adding many features, more user friendly, more flexible and universal. Yes, LupQ is basically multilingual. more... A history of hacking A history of hacking Hacking has been around for more than a century. In the 1870s, several teenagers were flung off the country's brand new phone system by enraged authorities. Here's a peek at how busy hackers have been in the past 35 years. Early 1960s

# Add Folder to Send To Menu: Specify Folder Location in Context Menu After , Vista added the "Library" in their UI, organizing files has been easier. But the menu is still as useless it was. An useful feature would be to be able to add and specify folder locations to which to send the file to… Win 7 DoS by RA Packets Added 9-15-2011: Win 8 Developer Preview is also vulnerable Added 5-30-2011: RA Guard Evasion Added 5-29-2011: FreeBSD is also vulnerable! Tutorial: Cracking WEP Using Backtrack 3 Standard Disclaimer: This article is provided for informational purposes only. thew0rd.com and its affiliates accept no liability for providing this information. Please only use to test configurations on your own equipment. Accessing WIFI networks that do not belong to you is ILLEGAL. This article will explan how to crack 64bit and 128bit WEP on many WIFI access points and routers using Backtrack, a live linux distribution. Your mileage may very. The basic theory is that we want to connect to an Access Point using WEP Encryption, but we do not know the key.

64 Things Every Geek Should Know. The term ‘geek’, once used to label a circus freak, has morphed in meaning over the years. What was once an unusual profession transferred into a word indicating social awkwardness. As time has gone on, the word has yet again morphed to indicate a new type of individual: someone who is obsessive over one (or more) particular subjects, whether it be science, photography, electronics, computers, media, or any other field. A geek is one who isn’t satisfied knowing only the surface facts, but instead has a visceral desire to learn everything possible about a particular subject. A techie geek is usually one who knows a little about everything, and is thus the person family and friends turn to whenever they have a question. If you’re that type of person and are looking for a few extra skills to pick up, or if you’re a newbie aiming to get a handhold on the honor that is geekhood, read on to find out what skills you need to know.

5 Fun things To Do on School Computers - Pahgawks Animations - StumbleUpon November 26th, 2010 I know it's been a while, but I'm reinstating my weekly blog post policy. This week will be about something I've wanted to write about for a while: School computers!