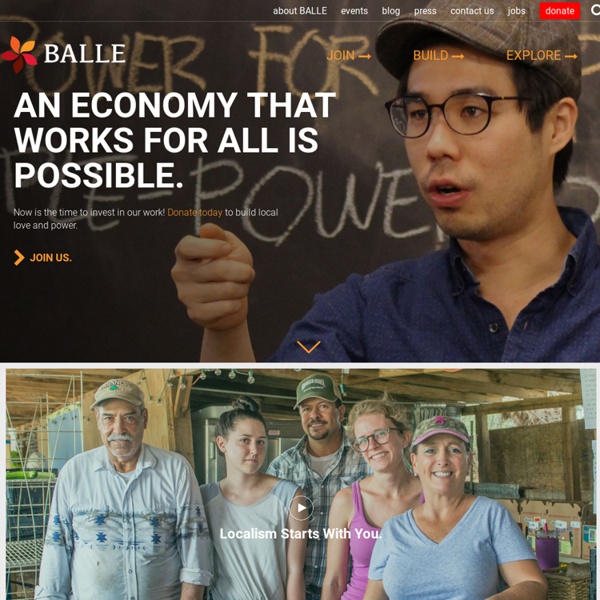 Changing the way our economy operates starts with a single person. It starts with you. We believe that real national prosperity — even global prosperity — begins at the local level and that by connecting entrepreneurs who are re-thinking their industries, funders who are investing in the local economy movement, and network organizers who can mobilize on a broad scale, we can — and will — create a stronger, more resilient, and fair economy. BALLE is the fastest growing business alliance of values aligned entrepreneurs, business networks, and local economy funders in North America. Together we are building local economies, city by city, town by town, business by business. Real prosperity starts here.

Will the real food movement please stand up? Image: Will Etling’s “Sustain,” originally for GOOD magazine and contributed to Green Patriot Posters. Farmer Bob Comis recently suggested that the food movement is suffering from “multiple personality disorder.” He argued that several vocal factions — foodies, locavores, and “smallists” — tend to dominate the food movement discussion, unrealistically distracting us from our ultimate objective: bringing affordable, organic food to all as part of a broader commitment to social justice. News « Econ4 Fast Company (fastcoexist.com) reports on Econ4: “We’re economists: we want to promote not only the supply of new economics teaching but also student demand for it.” Read the story and accompanying interview here. The Wall Street Journal, reporting on the American Economics Association’s recent decision to require economists to disclose potential conflicts of interest, quotes Econ4′s George DeMartino and Gerald Epstein, leading advocates of uploading ethics into the profession. George DeMartino, a University of Denver professor who headed the panel, has argued for the adoption of an even broader “economists’ oath” that would address questions like the ethics of advising dictators and the responsibility of economists to stand up for the poor.Gerald Epstein, a professor at the University of Massachusetts at Amherst who has previously criticized economists’ lack of disclosure, in an email called the policy “a very big step forward.”

Stockholm Convention (POPs) Schedule and registration Objectives Increasing Parties’ knowledge on existing guidance to update NIPs, Parties’ understanding of HBCD and other POP-PBDEs listed, and Parties’ capacity to make inventories of POP-PBDEs, as part of the NIP update. Contents Introduction - 5 min Presentations Understanding HBCD and POPs-PBDEs - 10 min. Guide to Coconuts From its butter to its water—the mighty coconut may be the perfect food. Considered a fruit, a nut, and a seed (though technically in the drupe family), the coconut is one of those addicting foods that you can never get enough of. The palm is also called the “Tree of Life” because every single part of the plant can be used to make everything from milk to musical instruments. It’s a good thing the coconut lives up to its weighty name, providing the world with delicious retreats into coconut-food heaven. Here’s the low-down on the health benefits, how to bake up delicious coconut cake, and whip up beauty applications, and why everyone is obsessing over this fuzzy, brown food. Quenching Thirst Coconut water is getting more grocery attention, and not only at the health-food stores.

WIR Bank WIR Bank logo The WIR Bank, formerly the Swiss Economic Circle (GER: Wirtschaftsring-Genossenschaft), or WIR, is an independent complementary currency system in Switzerland that serves businesses in hospitality, construction, manufacturing, retail and professional services. WIR issues and manages a private currency, called the WIR Franc, which is used, in combination with Swiss Franc to generate dual-currency transactions. The WIR Franc is an electronic currency reflected in clients' trade accounts and there is no paper money. The use of this currency results in increased sales, cash flow and profits for a qualified participant.

The Corn Conundrum One of summer’s greatest vegetable pleasures is missing from my garden. I don’t grow corn, much to my children’s dismay. Every year, they ask to plant some, and every year, I make excuses: We love buying our corn from Fred, a farmer in the next town, who sells sweet, heavy cobs out of the back of a vintage pickup. Post-capitalism Socialist economics and the socialist calculation debate concern the organization and functioning of a post-capitalist system. This subject encompasses alternatives for the major elements of a capitalist system, such as the wage and profit systems, market-based allocation, private ownership of the means of production, and the use of money as a measure of value; and critical analysis of post-capitalist economic models.[1] Arguments for post-capitalism[edit] In the Marxist method of analysis and theory of historical materialism, specific modes of production come into being as a result of underlying changes in the level of technology. Post-capitalist systems[edit]

Solidarity economy The definition of "solidarity economy" consists of activities organized to address and transform exploitation under capitalist economics, and can include diverse phenomena.[1] For some, it refers to a set of strategies and a struggle aimed at the abolition of capitalism and the oppressive social relations that it supports and encourages; for others, it names strategies for "humanizing" the capitalist economy—seeking to supplement capitalist globalization with community-based "social safety nets". The still evolving term "solidarity economy" is an English translation of a concept formally formulated in Lima, Peru in 1997 (economía solidaria), in Quebec in 2001,[2] and in Brazil during the World Social Forum of 2001, and in Portuguese as "economia solidaria".[3] It is also represented by the French "économie solidaire" and similar terms in several other languages. As such it is sometimes translated by other expressions such as "solidarity-based economy". Social and solidarity economy[edit]

The Blue Economy The Blue Economy: 10 years - 100 innovations - 100 million jobs is a book by Gunter Pauli. The book expresses the ultimate aim that a Blue Economy business model will shift society from scarcity to abundance "with what we have", by tackling issues that cause environmental and related problems in new ways. The book highlights potential benefits in connecting and combining seemingly disparate environmental problems with open-source scientific solutions based upon physical processes common in the natural world, to create solutions that are both environmentally beneficial and which have financial and wider social benefits. The book suggests that we can alter the way in which we run our industrial processes and tackle resultant environmental problems, refocusing from the use of rare and high-energy cost resources to instead seek solutions based upon simpler and cleaner technologies.

Some Macroeconomics for the 21st Century Abstract This note describes a numerical simulation of a model of economic growth, a simplified version of Robert Tamura's (1996) model of world income dynamics, based on technology diffusion. The model makes predictions for trends in average world income growth and about the evolution of the relative income distribution that accord well with observation. The model is used to forecast the course of world income growth and income inequality over the century to come. Download Info If you experience problems downloading a file, check if you have the proper application to view it first.

Food Co-op Initiative Looking for a co-op forming near you? Food Co-op Initiative maintains a map of co-ops still in their organizational stage. Click on the map to see the full version. Cooperative Grocer Network maintains one of the most complete directories of US retail food co-ops. You can search for co-ops by name or state. Emergency Entrepreneurship & Economics of Happiness From Austerity and a Return to Poverty, Forward to Better and Richer Living… Much has been made of the economic troubles in Europe. Of course, high unemployment does not bode well, and high youth unemployment is even worse a burden. Bailing out banks and seeing their management return to getting bonus payments while social services and benefits are being cut hardly makes for a social (and economic) climate that inspires confidence. At the same time, one wonders what protests against austerity (or the American calls to invest anti-cyclically so as not to throttle off growth) are supposed to achieve – a return to the spending of money that isn’t really there, but only created out of thin air in the form of debt, to be repaid later, with interest? Two patterns, which might really be one, are eye-catching: