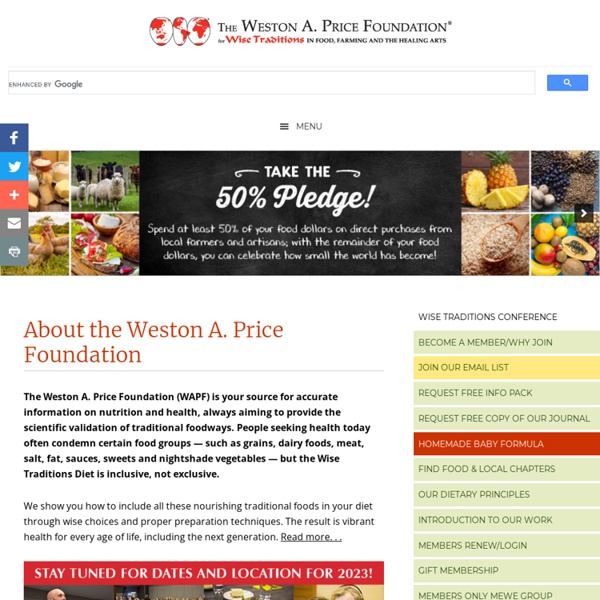 Fevers in Children There is a curious phenomenon that goes on in science: as we study the physical world, inevitably we uncover facts that contradict old assumptions. As scientists are seekers after the truth wherever it may be found, one would expect that they would quickly revise or even discard old, unproven theories when new facts and discoveries emerge. In fact, in many cases just the opposite occurs; "the scientific community" often circles the wagons and protects its pet theories.

Farmstead Chef - Harvest Haystacks: The Ultimate Community Meal There’s nothing better than a rural road trip with a mystery dish. During our wanderings last weekend around Goshen, Ind., we visited the Michiana Mennonite Relief Sale, where tried haystacks for the first time. This weekend event featured an auction and sale raising several hundred thousand dollars for the group’s international peace and justice work, but on Friday night food reigned king. Mashall King, a foodie friend and managing editor at The Elkhart Truth, helped us navigate the booths of tempting homemade food run by local Mennonite churches. The haystack food tent drew us in, as the concept was so simple yet completely new to us—the perfect meal for a large-crowd fundraiser.

Culinary Alchemy: Your Own Herb and Spice Mixtures I have many recipes calling for different types of spice mixtures in my books. Some are simple and familiar, some lavish, others find their home in ethnic cuisine. They range from classic French and Mexican to the dry toasted spices of India, Japan, and Morocco. A dash of herbs or spices, not too overwhelming, allows the cook to present a familiar dish with new tastes. They are a great salt substitute, tricking your palate with the savory accents. Great cooking comes from “people who have an innate capacity to taste and see and smell,” says Cristeta Comerford, White House Chef. Coconut Oil Treatment, Four Teaspoons a Day Can Reverse Alzheimer's Disease Coconut oil treatments have been shown to be a powerful remedy for Alzheimer’s — and dozens of other life-threatening diseases. With the use of the coconut oil treatments, we can fight Alzheimer’s so simply, with just 4 teaspoons of coconut oil a day. In 2008, neonatologist Dr. Mary Newport learned that her husband Steve was in the early stages of Alzheimer’s. Steve was only 58 at the time!

Permaculture. The Future of Business and Beyond. An Interview Compilation (PVP081) Podcast: Play in new window | Download “You, as a food buyer, have the distinct privilege of proactively participating in shaping the world your children will inherit.” Joel Salatin This episode is a compilation of interviews that I recorded during PV1 – March 13-16, 2014. The general theme of this episode is how business can benefit from permaculture. How we as the permaculture community can positively impact the future of business. Canters Deli-Contact/Locations CANTER’S DELI 419 N. FAIRFAX Canter’s Fairfax has been an LA landmark since 1931. We are one of California’s oldest deli’s, located in the heart of the Los Angeles Miracle Mile District. Open 24 hours a day, we provide delicious and diversified comforting meals, top-quality baked goods, take-out, delivery and catering.

Coconut Oil Reverses the Effects of Alzheimer’s in 50 Year Old Woman Catherine: “Coconut Oil has become my best friend” – Photo provided by her family by Raul Lora-Zamorano [Health Impact News] Catherine and I were married on May 1st, 1988. Prior to our marriage, Catherine was a senior manager in the administrative area of a major retail chain with some 800 stores. I had the responsibility of calling on her direct superior. While she was always a head turner, what really drew me in was her professionalism. Think Like a Commoner Getting to the heart of the permaculture ethic of fair shares, David Bollier's book provides an excellent primer on the theory and practice of the commons, a bottom-up vehicle for "social and political emancipation and societal transformation." In the process he expands our imaginations to reclaim the wrongly-maligned word, 'commoner', outlining a budding revolution which most of us are already part of, whether we realise it or not. A commons, standing outside of the spheres of market and state, consists of "working, evolving models of self-provisioning and stewardship that combine the economic and the social, the collective and the personal." While many might associate discussion of the commons with historical events such as the enclosure movement, Bollier brings commons theory right into the present age. R.

buy All cans are 6 oz and have an easy pop-top lid. Do you already have the fish? We also do Custom Canning! Click HERE for a price list of our service. 'He's going to be better than he was before' Grant Virgin suffered a traumatic brain injury after being struck by a hit-and-run driverHis parents decided to give fish oil a tryThe teen surprised his mother by calling her in the middle of the nightHis mother calls his recovery "unbelievable" For more on Grant Virgin's incredible story, tune in to "Sanjay Gupta, MD" at 4:30 p.m. ET Saturday and 7:30 a.m. ET Sunday. Palm Desert, California (CNN) -- It was mild curiosity that drew John Virgin and his son Bryce to the flashing lights and commotion of an accident scene near their home.

Time-based currency In economics, a time-based currency is an alternative currency where the unit of exchange is the person-hour. Some time-based currencies value everyone’s contributions equally: one hour equals one service credit. In these systems, one person volunteers to work for an hour for another person; thus, they are credited with one hour, which they can redeem for an hour of service from another volunteer. Critics charge that this would lead to fewer doctors or dentists.