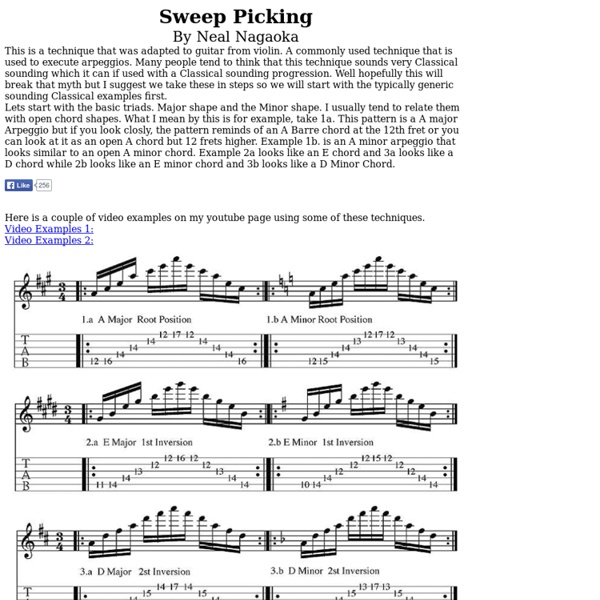 Michael Hogg - Software - Guitar Chord Explorer - Instructions I’ve been playing the guitar since 2002, and I’ve come across many websites with guitar chord programs, but I’ve never been totally satisfied with any of them. Some have terribly complicated controls, some produce confusing chord diagrams, and some even contain incorrect chord voicings. I wanted to create a program that’s both powerful and easy to use, while still making it free for all to share, so in 2003 I began to develop GCE in Java.

Online Jazz Guitar Lesson Websites Joe's Guitar Method Fingerstyle Jazz Guitar -- Jurupari's Site Bob Russell's Jazz Guitar Page Joe Finn's Lessons Rick Del Savio's Lessons Steve Carter's Lessons Targeting a Mode - Turning Scales into Solos - Part 6 If there are two main points that you have, hopefully, gotten thus far in each of our “Turning Scales into Solos” series of lessons, it’s that, first and foremost, a solo should be determined by the song, by its mood, feel and chord progression. The second idea is that a single scale is rarely the only solution to finding a way to solo over a chord progression. Getting these two thoughts into your head is essential if you want to be able to solo over any song.

MATT WARNOCK GUITAR When improvising over a maj7 chord in a jazz or modern improvisational context, most guitarists will fall back on one of two sounds, the major scale and the Lydian mode. While both of these scales offer the right melodic content to navigate a maj7 chord, producing either a natural 11 or #11 interval in that context, there are a few other melodic devices that you can add to your repertoire to help you expand your maj7 improvisational pallet. One of these devices is the Lydian Pentatonic Scale. While this scale may not be as popular as its cousins the Major and Minor Pentatonic Scales, the Lydian Pentatonic Scale can offer a fresh approach to soloing over maj7 chords, while at the same time retaining the Lydian #11 sound and being related to the Major Pentatonic Scale that you may already have under your fingers.

All Tabs Music Tablature: Fingering Techniques Set One The exercises on this page are intended to help you develop strength, dexterity, and coordination. Each includes a midi sound file as an example, and a tab file that you can download to practice with. Playing along with the tab is highly recommended in order to develop a good sense of rhythm and timing. Jazz Progressions Jazz Progressions are simply common chord progressions in jazz music. One of the most common progressions is the ii-V-I progression. The ii-V-I sounds at its best when you use seventh chords and their expanded voicings. As you already know from past lessons, the ii chord is a minor chord, the V chord is a dominant chord, and the I chord is a major chord. So the most basic Jazz progression is the ii minor 7 - V dominant 7 - I major 7.

The Minors can become Majors In the last lesson, we took the IV chord and transformed it from a major chord, to other chords. We are going to do something similar here. There are 3 minor chords in a major scale. the ii chord, the iii chord, and the vi chord. So if we were in the key of D major, those chords respectively would be E minor, F# minor, and B minor. We can transform these chords by turning them into major chords. We can take them even further and turn them into dominant 7 chords. Improvisation Tools: Pentatonic by Gunharth Randolf Improvisation Tools: Pentatonic 1) The "Rock Hall of Fame" Patterns With these two patterns you can nearly play all top 100 Blues and R&R licks.

This is an awesome intro to sweep picking. I picked it up right away by steveneudy Nov 26