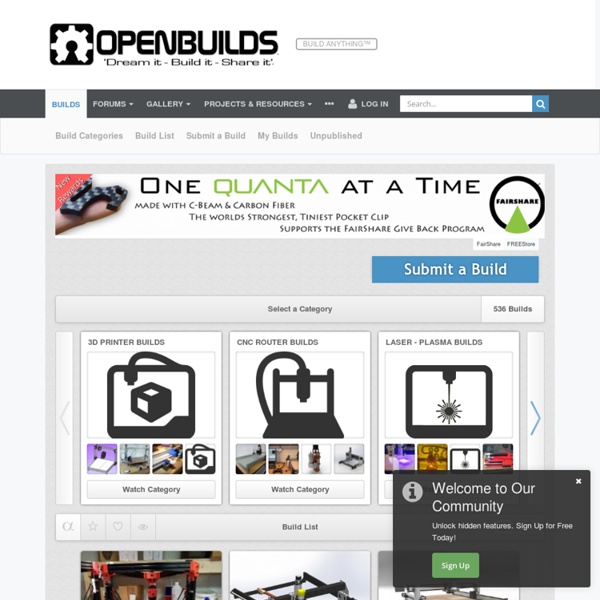 Blog January 22nd, 2015 by bdring It’s ORD Camp time again this weekend. Every year I have done a gonzo build of some type of CNC machine. This year I only had a few hours to spare, so I wanted something simple. These are never meant to be practical machines, just conversation starters. Rotary Hydroponic Unit 3D Print Model Description Who said we couldn't print useful things? Here's a flat-pack modular rotary hydroponic unit to be produced by most CNC tools. My Blog Post about this here: engineeringourfreedom.blogspot.com/2011/05/do-cartwheels-feed-people.html For working examples of such a system, see OmegaGarden.com RotoGro.com or H2ODynamic.com Call it the ModRotoHydro, RapFarm, FeederBot, Farm@Home, or whatever else you like, I don't care, just help me build them and feed the world.

Build your own open-source machinery with plans at Jua Kali An ambulance pulled by a donkey, one of the open-source machines with free plans available featured on www.juakali.info. Ask for a pair of door hinges at a hardware store in Kenya and the shopkeep might offer two options: regular and “Jua kali” hinges. The jua kali pair could cost half the price, but they will not be finished or cleaned, and they are likely made by a cheaper, cruder manufacturing process the forges each hinge in a unique size and shape. Jua kali is a Kiswahili term that literally means “hot sun.” But in Kenya, which shares English and Kiswahili as official languages, jua kali has taken new life as an adopted word in the English language that denotes the entire informal sector of goods and services.

Jonathan Keep, Self build Delta 3D printer Annoyed and frustrated by 3D Systems buying out and then stopping the production of the RapMan 3D printer. This was the first kit printer Belgian design duo Unfold adapted to print with clay and has subsequently been copied and widely used by others, I decided to develop my own replacement 3D printer. Based on the delta type of 3D printer my aim has been to use parts that can either be made with basic DIY tools and skills, or ordered off the internet.

Rotary Hydroponic Unit by 4ndy Who said we couldn't print useful things? Here's a flat-pack modular rotary hydroponic unit to be produced by most CNC tools. My Blog Post about this here: For working examples of such a system, see OmegaGarden.com RotoGro.com or H2ODynamic.com Call it the ModRotoHydro, RapFarm, FeederBot, Farm@Home, or whatever else you like, I don't care, just help me build them and feed the world. Flux 3D: A cheap, modular 3D scanner, printer and laser engraver A Taiwanese team has developed the Flux 3D, a cheap all-in-one 3D printer, scanner and laser engraver that, thanks to its modularity, also leaves room for further expansion. The device also allows users to create, share and download designs directly from their mobile devices and connect to the printer via Bluetooth for more convenient operation. View all It wasn't too long ago that buying your own personal 3D printer would set you back a small fortune. These days, though, prices are dropping so quickly that even those of us on a modest budget can afford a good quality all-in-one 3D printer and scanner – something that was unthinkable only a few years back. First came the $2,499 Zeus, then, just a few months ago, the $1,395 Genesis.

BCN3D MOVEO - A fully OpenSource 3D printed Robot Arm by BCN3D BCN3D Technologies keeps taking important steps in order to achieve his goal of bringing the digital manufacturing technology to everyone. In this occasion we are presenting the BCN3D Moveo, a robotic arm design from scratch and developed by our engineers in collaboration with the Departament d’Ensenyament from the Generalitat de Catalunya. Its structure is fully printed using additive manufacturing technologies and its electronics are controlled by the software Arduino. It has a Marlin based firmware developed for robot arms with steppers by Zortrax. The BCN3D Moveo has 5 axis. Moveo, fully functional nowadays, has been born, as all the BCN3D Technologies products, with an open and educational wish.

Crawlbot The Printrbot Crawlbot is a CNC router that cuts 4’x8′ material, yet occupies a small footprint in your garage. The Crawlbot recently won “Best Large Format CNC” in Make Magazine’s 2015 Digital Fabrication Shootout. Out of the box, the Crawlbot cuts 40″ x 80″ out of a 4’x8′ sheet of plywood.